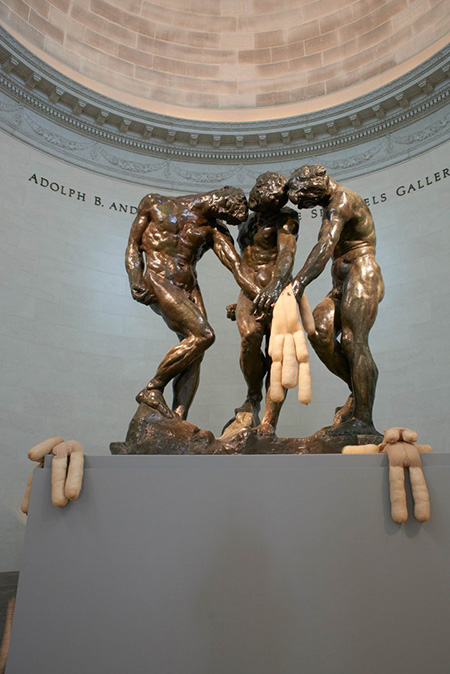 Installation of "Sarah Lucas: Good Muse" at the Legion of Honor, San Francisco

A few months ago, I wrote about the new curatorial strategy in effect at San Francisco's Legion of Honor, of showing contemporary artwork interspersed with the permanent collection of traditional European art. The artist was the sculptor Urs Fishher, and I had a mixed response to the exhibition, which was installed both in the French neoclassical courtyard dominated by Rodin's iconic "The Thinker," and inside, amidst the works of Rubens, Rembrandt, Poussin, and other dead white males of lesser note.

The current sculpture show, entitled "Good Muse," by Sarah Lucas, is stylistically similar, hip and ironic, apparently geared toward attracting younger viewers unable or unwilling to confront the boring, passé art of politically incorrect creators. While Fischer achieved a certain piquant charm by juxtaposing his large bronze casts of amateurish clay sculptures with the columns and courtyard, and Rodin's pensive colossus, Lucas's soft figurative sculptures merely disrupt whatever contemplative atmosphere may remain in the museum in this year 100 or so of Our Duchamp.

But, a quick tour d'horizon. A large pair of women's boots cast in concrete, "Jubilee," stands at the center of the foyer gallery, with its permanent Rodin residents now flanked by translucent cast-resin toilets placed atop small refrigerators and pedestals. The visual discontinuity is enough, but the pretentious banality of the curatorial notes is in my opinion excruciating. "Jubilee" is presented as a contemporary riposte to Rodin's "Gates of Hell" (placed, as it is, amid details from that monumental work): the material, we're told, conjures up the cement boots of gangster lore, "and thus aligns a woman's sexual power with … renegade violence." The seven "Floppy Toilet" works, cast in urine yellow, and seemingly melting or dissolving, "serve as a reminder of our servitude to the biological needs of our bodies," with their "unexpected and often comical grace … contradict[ing] their scatological implications in favor of more existential considerations."

Two abject, dolllike sculptures made from tights stuffed with cotton fluff, and entitled "Tit Teddy (Gates of Hell)," are ignominiously placed atop the pedestal for Rodin's "The Three Shades." Two similar stuffed-tights figures sit in adjacent galleries. "Titti Doris," a cluster of balloonlike breasts with long spindly legs but no torso, arms or head, slumps in a chair, "a fertility goddess wrapped up in the insecurities of a little girl." "Washing Machine Fried Egg," a pair of flaccid legs surmounted by sunny-side-up eggs for breasts, "simultaneously iterates and lampoons the patriarchal idea that a woman's purpose is … serving a husband's sexual appetites and domestic needs." The monumentally ithyphallic "Innamemorabiliumumbum" "combines the iconic tropes of the reclining odalisque or harem girl with that of the predatory satyr eternally ready and on the hunt for love."

Even more appalling is a trio of nude female figures, truncated at the waist and sprawling or reclining suggestively. Cast from life in white plaster, they derive from the Greco-Roman marble-statue tradition, but they're the anithesis of classical dignity and gravitas: the supine Margot has a cigarette inserted in her anus; the sitting Pauline has one in her buttocks; the prone Michele, legs spread, has a cigarette placed in her vagina. The explanatory labels discuss female exploitation and empowerment — you go, girl, victim! — but how can any self-respecting woman, especially an enlightened, educated one, see these as anything but deeply offensive and, yes, misogynistic?

To be fair, Lucas trashes the male gender as well, as we've seen, but are people really as contemptible and mindless as portrayed here? (Rodin's portrait of Camillle Claudel and hers of him stand, by the way, near the entrance to the toilet-rich gallery.) The classic tradition, with Rodin as its Romantic culmination, often ennobled man. We live in an antiheroic and sometimes misanthropic age — for our anthropogenic sins no doubt — but the earlier age was also cognizant of madness and tragedy, none of which is on display here.

These two shows, Fischer and Lucas, purport to honor the work of Rodin. Want to do that, for real? Tolle et lege (take up and read): The_Burghers_of_Calais