A Talent for Talent
Editors’ Roundtable
Column by DeWitt Cheng 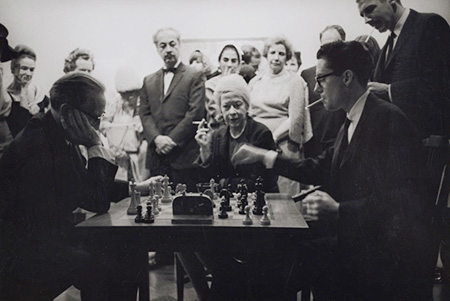 Some years ago I became aware of the art curator extraordinaire Walter Hopps. He was the subject of Ed Kienholz's affectionate assemblage portrait of 1960 (now in the Lannan Collection, Los Angeles), "Walter Hopps Hopps Hopps" which captures his dual aspects: the mild-mannered, bespectacled scholar, Clark Kent, and the indefatigable (and often drug-enhanced) Art Superman — or, opening his overcoat to display avant garde wares such as deKooning postcards, the art pusher. Hopps was in fact not much of a salesman, however; more of an enthusiast and champion. By his own estimation, he was a guy who finds a painting in a cave and holds up the torch.

Hopps' role in developing the Los Angeles art world of the 1960s as gallerist, curator and tireless proselytizer is well detailed in Morgan Neville's excellent documentary "The Cool School" (2008), narrated by Dennis Hopper. In 2015, Robert Berman E-6 Gallery in San Francisco replicated the famous 1963 Marcel Duchamp Pasadena Museum of Art show that had been curated by the then thirty-one-year-old Hopps, a show that would have massive repercussions in the art world. One of the photos by Julilan Wasser depicts the curator and artist playing chess; it's not as memorable as the shot of Duchamp playing chess with a nude Eve Babitz, but reflective of Hopps' rapport with and unwavering support for interesting artists.

When Hopps died, in 2005, of pneumonia, at age seventy-two (while in L.A. to see a George Herms retrospective), it was as if an era had passed. Paul Richard wrote, in The Washington Post ("Walter Hopps, Museum Man With a Talent For Talent"): "Most museum men are smooth. Walter Hopps wasn't. He was sort of a gonzo museum director — elusive, unpredictable, outlandish in his range, jagged in his vision, heedless of rules. That's if you could find him, which wasn't always easy. But Hopps, who died Sunday in Los Angeles at the age of 72, had a peculiar gift. He found artists, wonderful artists, and he found them first."

If Spinoza was a "Gott betrunkener Mensch," a man drunk with God, Hopps was, after his early epiphany in high school of the modern art collection of Walter and Louise Arensberg, the pluperfect "Kunst betrunkener Mensch." Substitute art for God. Paul Richard again: "Hours, sometimes days, would pass before one heard his low, rich voice, often on the telephone in the middle of the night. It was always worth the wait. He was the best art talker I have ever heard. His speech was like a Jackson Pollock drip painting, swooping, swelling, doubling back. He mesmerized. He taught." Yet little of that mesmerizing talk survived — until now. A few years before his death, Hopps taped a hundred hours of interviews with artist, critic and editor Anne Doran; those interviews have been edited by The New Yorker Fiction Editor Deborah Treisman, who had known Hopps for years, into "The Dream Colony: A Life in Art," just published.

I attended a reading in late June at City Lights Books, in San Francisco, with its bohemian, free-speech history, a singularly appropriate venue for such an iconoclast. (Digression: Hopps had seen the paintings by City Liights' founder, the poet Lawrence Ferlinghetti, in the 9 Mission Street warehouse during the late 1940s, as a teenage cultural tourist.) While organizing that quantity of recording must have been a herculean task, Treisman notes that Hopps, who seems to have never forgotten anything, was an accomplished and practiced storyteller and lecturer. Some of his anecdotes had been clearly polished by repetition into memorable prose. Whatever the degree of editorial reshaping, the book reads smoothly and conversationally, detailing the adventures and passions of a remarkable eye and intellect driven by passion and imbued with so little of the bureaucratic spirit — the San Francisco art critic Mark Van Proyen calls it art administrativism — prevalent today that Corcoran Gallery colleagues made gentle fun of his perpetual tardiness with a pin reading, "Walter Hopps will be here in 20 minutes." Hopps' story makes for welcome reading in our current floundering art scene, with its aesthetic claims and counter-claims, and, always at our back, the wingèd chariots of money, power, glamor and fashion.

Ed Ruscha, in his introduction: "There was such vitality to the things he said. He had the ability to rhapsodize ... He didn't just talk about famous artists and preach their success, He talked about artists who were obscure, oddballs who were out in the sticks, not necessarily accepted by the mainstream of the art world ... the dust bunnies. He was very catholic in his tastes, and he had real respect for every bit of it." Hopps' memoir would make a fine one-person stage show (with slides), or perhaps the serious, passionate, funny movie about art and artists that we've all been waiting for. But the book, almost universally praised, will probably have been better.