The Eclipse is Coming
Editors’ Roundtable
Column by Bill Lasarow 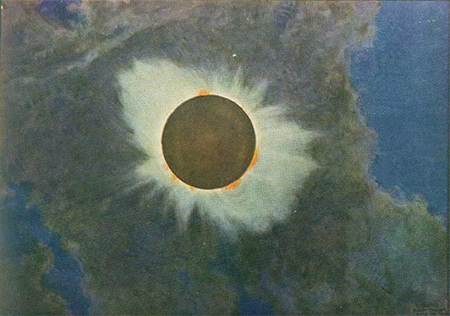 When the full eclipse of the sun arrives August 21st there will undoubtedly be a surfeit of references to the predictions of Nostradamus and not so veiled references to a bloated body casting a dark shadow across the body politic by late night comics. Sufficient numbers of gawkers will flood the tracking zone on that special day as to make hotel reservations along its path pretty much impossible by now. This for an event that will last for no more than about 2 1/2 minutes for those in optimal locations — assuming that cloud cover does not obscure it at the crucial moment.

Prior to our solving the mystery of the scale and structure of the physical cosmos, eclipses would unleash our worst superstitious tendencies, serving as an occasion for the casting of moral judgment, heartfelt repentance and frequent burnings at the stake. But the appearance of the sun's magnetized atmosphere, its corona, was revealed to the naked eye of man long before the invention of magnifying lens. Its visual appearance has inspired the global imagination and intellectual sensibilities for millennia.

Unlike events such as fires, earthquakes and floods, which destroyed and altered lives in a matter of minutes or seconds, there was always a particular aesthetic grandeur attached to a phenomenon that maintains a healthy and silent distance from our homes and loved ones. Of course our ancestors never suspected that distance might bridge a gap of 93 million miles.

It is remarkable that the relative size of the moon to the sun pretty much matches the relative distance of the two bodies from the Earth — that is why the coverage of the moon's disk so closely matches that of the sun during an eclipse; it's just about a perfect fit. Out of the 200 billion star systems in our single not particularly distinguished galaxy, the chances that one particular sentient species would be able to fixate on such an illusion makes the harmless natural spectacle delicious for its sheer unlikelihood.

The ancient world was full of depictions of this event that appear in inscriptions uncovered in Babylonia and the Egyptian pyramids. Important fluctuations in the rise and collapse of the Aztec, Inca and Mayan empires have been linked to solar eclipses. It is well known that Pre-Columbian societies practiced human sacrifice; but not so much until sudden waves of bloody gifts presented to the sun god Inti by the Inca clergy would follow an eclipse. The Chinese as well as the Inca regarded the sun as being devoured by mythological creatures that found their way into the cultures' visual iconography.

Prior to Nicolaus Copernicus' 16th century calculations and Galileo's subsequent observation that the sun did not, after all, rotate around the earthly sphere, depictions of eclipses inspired and confirmed religious concerns of God's ire. As their revelations took root and the Renaissance revival of science and reason emerged, European artists' renderings and diagrams contributed directly to the development of astronomy.

On the last occasion of a total eclipse taking a similar path across the U.S., a century ago and just months before the armistice ending World War I, the U.S. Naval Observatory dispatched an observation team to Baker City, Oregon (about 300 miles east of Portland) that included artist Howard Russell Butler, who rendered a fine depiction of the corona at the crucial moment. Butler, known during most of his career primarily for his seascapes and portraits (he painted Andrew Carnegie thirteen times), continued to paint eclipses informed by his early experience with physics as a student at Princeton University. He may be best remembered as the founder of the American Fine Arts Society in New York, whose building, which opened at 215 West 57th St. in 1982, is an official city landmark. From that time to the present day this has been the home of the Art Students League.

Eastern Europe had its own solar eclipse on the selfsame date of August 21, 1914 shortly after the hostilities had broken out not two months earlier. As recently as a century ago much of the public superstitiously saw the celestial event as an omen of the unfolding conflagration. But five years later, shortly after the War ended, Sir Arthur Eddington used another eclipse to test Einstein's Theory of Relativity. Thanks to the eclipse, Eddington could observe the positions of background stars close to the edge of the sun. His finding that gravity indeed affects light by bending space-time, as the Theory predicted, made Einstein into an overnight international celebrity.

There may exist nothing else in the realm of mass human experience comparable to an eclipse. The likelihood of exactly the right size and placement of a moon rotating around an inhabited planet is so remote, and yet here it is for all to see, experience and interpret. The ways in which it has influenced beliefs, given rise to stories and mythologies, inspired images and led to scientific breakthroughs have played a more than marginal role in the development of global culture and technology. It serves as a reminder that who we are, indeed our mere presence, is much more than a series of fortuitous coincidences. It's miraculous.