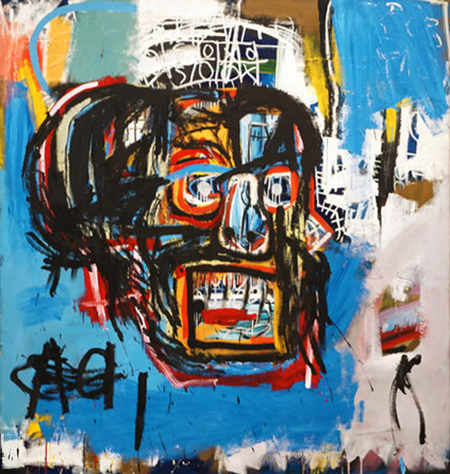 The art world and general public collectively gasped last month when an untitled 1982 Jean-Michel Basquiat painting sold at Sotheby’s for $110.5 million. As predictably happens when artworks fetch stratospheric hammer prices, reactions ranged the gamut. Skeptics of modern and contemporary art found themselves stupified that something their first-grader could presumably paint could be so highly valued. Progressives leery of the “one-percenters” pooh-poohed the decadence of an artwork commanding such a sum when so much of the world starves and struggles. And while some observers heralded the sale as a long-overdue entrée by an African-American artist into a pantheon previously reserved for whites, others noted the sad irony of escalating even further the commercial canonization of a man whose struggles with art-world success likely fed his depression and hastened his death at 27 of a heroin overdose.

While I respect the broad spectrum of viewpoints, I personally have no problem with Basquiat’s or anyone else’s artwork setting million-dollar milestones, or with the larger phenomenon of wealthy people parking their assets in fine art. If billionaires can wheel and deal in cattle futures, crude oil, shipping, technology, mutual funds and defense contracting, why not in art? Haven’t the pharoahs, the Medicis and the Carnegies of the world always underwritten the visual, decorative and performing arts, to say nothing of architecture and design? If the market demands it, it’s fine for a Koons, Hirst or Kusama to sell for megabucks. If I were a rich man, I’d certainly rather own a “Balloon Dog” than a plastics factory.

My knee jerks, however, when I ponder whether, when a famous dead or living artist sets an auction record, it prevents a talented but not acclaimed artist from selling a piece for, say, $1,500 or $15,000?  Put another way: Does the Basquiat sale glamorize and empower the hardworking local or regional artist by association, or does it stratify the aesthetic ecosystem so dramatically that it ghettoizes the artist next door into terrain impossibly remote from the rarefied echelons?

In my observation, auction houses and blue-chip galleries are not to blame for the decreased sales my artist and gallerist friends have been experiencing over the last decade following the Great Recession. Nor are they the prime culprit for the much-ballyhooed decline of the mid-level gallery. Artists and gallerists who made a serviceable living in 2005 are finding it exponentially harder to sell their work today because the cultures of art education and collecting are withering.

As public-school arts education and government-subsidized arts institutions are ruthlessly defunded, young people are not learning about Leonardo or Vermeer, much less O’Keeffe or Chicago. They’re not inculcated into the ethos of art appreciation; therefore as they enter adulthood they have little curiosity to explore contemporary art. Museums have resorted to boozy under-40 parties to lure the young crowd (witness the Guggenheim’s Young Collectors Council soirées), while traveling shows themed around cars, fashion and movies trudge a weary circuit through regional museums in quixotic bids to boost attendance.

When I’m invited to dinners and events in the chi-chi condos metastasizing through Portland like glioblastomas, I look at the walls and see posters from decor shops and Target: Monet, M.C. Escher, The Beatles and Belle Epoque absinthe. I see framed sports and movie memorabilia. I see big-screen TVs in spots where a painting, drawing, or lithograph might once have hung. What scares me most is all the walls wholly unadorned, so many square feet of bare white nothingness, empty but not bereft, because no one thought to adorn them to begin with. We who value art and ideas cannot let these ominous white walls become white flags of surrender to cultural decay. We must view them as calls to sociopolitical action and activism, starting with the school board, the city council, the ballot box, the gallery down the street, and yes, the artist right next door.