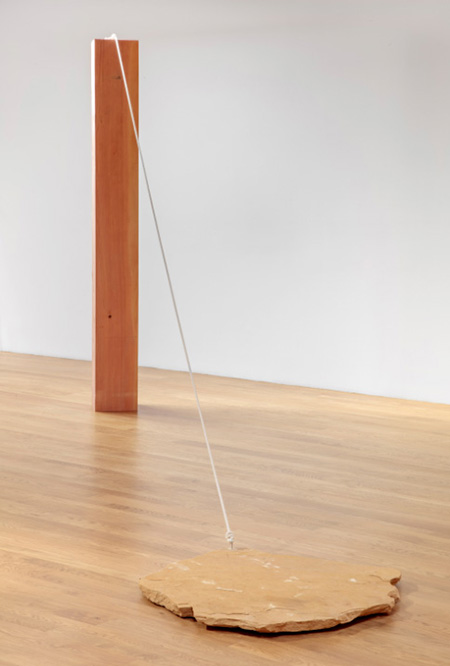 Lately I've been thinking a lot about nothing — by which I mean negative space in art. The catalyst for this introspection was an interview two colleagues and I conducted in February with Japanese artist Kishio Suga (b. 1944). A member of the Mono-ha art movement of the late 1960s and 1970s, Suga was in Los Angeles for the opening of his sprawling self-titled exhibition (see Jody Zellen's review) at Blum & Poe. In the immaculately spartan works on paper (all 1974 and 1975) featured in the show, the artist often uses vinyl tape to frame the sides of the picture plane, leaving the center pointedly empty. Except to call it empty is not quite accurate — in fact, not by a long shot.

Traditional Japanese aesthetics have long been concerned with the concept of "ma." "Ma" is not just empty space; it is, to simplify greatly, the dialogue between shape and space, form and non-form. In much of historical Chinese, Korean and Japanese landscape painting, the mist enveloping a tree or mountain is every bit as important, if not more so, than the tree or mountain itself. In fact, the contour of space between objects holds both a physical and metaphysical significance so profound to East Asian sensibilities, it may be impossible even to translate the word "ma." As Japanese architect Arata Isozaki has written: "The translation is either too conceptual — as with 'blank,' 'void' or 'vacuum' — or too descriptive, as with 'in-between,' 'distance' or 'pause.'" The true nature of "ma," he concludes, "lies hidden in the substratum of Japanese culture."

Artists outside Asia have of course also deployed negative space to heighten compositional and conceptual drama. Probably the most famous example of this strategy in the Western canon is the passage in Michelangelo's "The Creation of Adam" in the Sistine Chapel. The pregnant, electric space between God's and Adam's outstretched index fingers portend in a few short inches — in that penultimate moment before the first spark of contact — the the rise and fall of humankind. There are other iconic instances: the erotically charged gap between lovers' lips in Antonio Canova's "Psyche Revived by Cupid's Kiss;" the yawning sky surrounding Caspar David Friedrich's lonely figure in "Wanderer Above the Sea of Fog;" the rolling waves of wheat engulfing the figure in Andrew Wyeth's "Christina's World." But despite the searing power of such passages, we in the West are more accustomed to emphasizing figure over ground. Our eyes tend to read white as background, color as foreground, and our assumption, even down to the connotations of our language, is that whatever is in the background must be less important than the object in the foreground. To invoke Jacques Lacan, it better suits our patriarchal syntax and aims to centralize the almighty phallus and marginalize the vast context that dwarfs it.

One is not permitted such essentializing when viewing Japanese art, whether in screens and scrolls from the Muromachi through Edo Periods, or in the work of important post-War avant-gardists. Paradoxically voluminous voids speak to us silently in the centers of the circle paintings of Gutai founder Jiro Yoshihara; in the ethereal, dematerializing forms in the "From Point," "From Line" and "Dialogue" paintings of Mono-ha theorist Lee Ufan (Korean-born but pivotal in Japanese artistic circles); and in Suga's enigmatic works on paper and sculptural installations, which enchanted and perplexed me so completely at Blum & Poe. The placement of stones and metal plates in Suga's "Edges of Gathered Realms" (1993/2017) struck me as revelatory not only because of the materials' relationship to one another, but also because of their deceptively intuitive yet exquisitely calibrated relationship to the exhibition hall itself. The wood pillar and flat rock in his "Order of Condition" (2017) regard one another skeptically across the hardwood floors. The two objects are linked only by a single taut rope, which activates the interval between them and facilitates a communication. Empty space, empty air, a length of rope — all connect matter and ideas just as surely as does the unseen line connecting Adam's hand to his maker's. Who would have imagined a gap could prove so galvanizing?