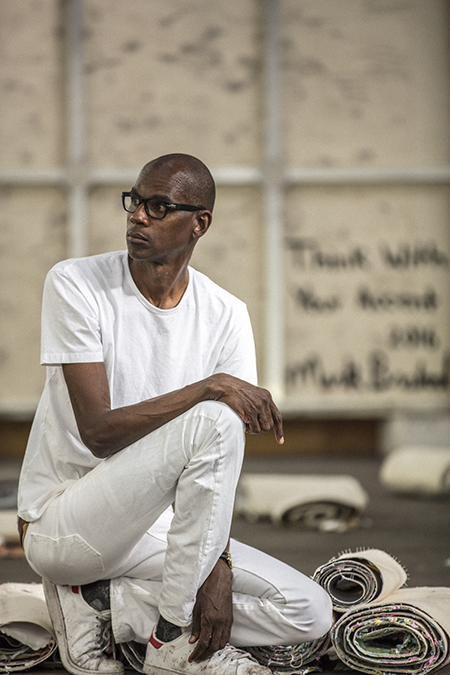 Mark Bradford will debut "Tomorrow is Another Day" at the U.S. Pavilion of the 57th Venice Biennale, May 13-November 26

Hmmm, recent events have you thinking about possibly trying another country on for size? Well, if art is your major beat, this just might be the summer to dust off your passport, get a load of fresh Euros, head across the Atlantic and poke around for a bit. Something happens this summer that only occurs once a decade, and like cultural catnip it will be drawing hordes of art aficionados from all over the globe.  In years ending in 7, and only then, for a good chunk of the summer Documenta, Skulptur, and the Venice Biennale will all be occurring more or less simultaneously.

First the facts: the Venice Biennale, which dates back to 1895, is still the gold standard for these kind of enormous art festivals and is, well, a biennial, with its visual art component held in the odd-numbered years, including this coming summer. It's an enormous mix of national pavilions (Mark Bradford will represent the U.S. this year), large curatorial projects, and a multitude of off-site events. It all takes place in a remarkable city accustomed to handling large crowds of visitors. It runs this year from May 13 through November 26. Documenta, centered in Kassel, a mid-sized city in the heart of Germany, has been held since 1955 (its first few iterations were held several years apart; beginning in 1977 it adopted its current five-year respite between the years ending in 2 and — you guessed it — 7). For the first time, Documenta 14 will be shown in two more or less independent parts, in Athens and in Kassel, in each city for precisely 100 days. It's in Athens April 8 – July 16, and in Kassel from June 10 until September 17. And Skulptur, also known as Skulptur Projekte Munster, has been held once a decade in Germany since 1977 and— you guessed it again! — in the year ending in 7 (the fifth Skulptur runs from June 10-October 1). Documenta and  Skulptur are marked by artists' projects, often out of doors; Joseph Beuys staged some of his most famous public projects at Documenta.  Skulptur limits the number of participating artists, usually around 30, while the Venice Biennale and Documenta exhibit hundreds.

There are curious traditions and mannerisms in all of them. Documenta, for example, doesn't make public the list of its scores and scores of invited participating artists until the opening of the exhibition, though they have ostensibly been working on their projects for a year or two, and gossip about who's in is a mini cottage industry. In Venice the presence of around 30 national pavilions in the Giardini, each controlled by their governments — the American Pavilion in the Giardini is directed by the U.S. State Department. Bradford was selected about a year ago, during the Obama administration (care to hazard an early guess as to who might be in the U.S. pavilion in 2019?). The practice is a throwback to earlier international expositions, and some nations use their platform here mostly to encourage tourism and investment in their homeland. But all three venues are stunningly artcentric, and there are moments where you get swept up in a rush of community, knowing that you're surrounded by thousands of people who are as interested in contemporary art as you are. There's something around each corner that might dazzle you, there seems no end to it, they are like a art fair, but far bigger and not so completely centered on the ceaseless commodification of culture.

That is, if you don't show up at any of these exhibitions around opening day. You recall those dates I cited above? Well, those dates are for regular folk. In each case, for several sun-drenched days and balmy evenings before the official opening there will be preview openings for the art world glitterati, for the mega-collectors, the hottest art dealers/tastemakers, Hollywood stars and rock singers, and, yes, even the art critics for the very most major publications. All are invited to pal around with their peers for a couple of days, balancing, to be fair for a bit, seeing and being seen. I'm already hearing of the 'approved' schedule: of course, the movers and shakers will descend on Venice first in May, for the opening of the Biennale, then jet home for a bit, and return to Munster and Kassel for their preview openings of Documenta and Skulptur in early June. Then a few days at a spa and a quick run to Switzerland for Art Basel, arguably the world's most important art fair, which takes place (and you don't think this is a coincidence, do you?) from June 15-18, with 291 of the world's finest art galleries in attendance. Bring your Altoids.

Or wait a few weeks and come when the first rush to these events starts to abate, when the newness has rubbed off, when the critics have had their opening whack at them online or in the press. The crowds will be smaller and the lines shorter. (It will be hotter though; July in Venice is a cauldron, and Germany isn't much better). But do come; 2027 seems a long way off, and there will even be two presidential elections between now and then.