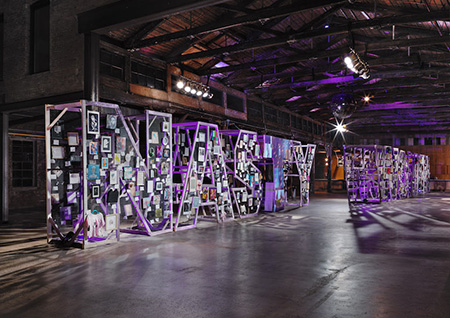 Leading up to Donald Trump's inauguration, I experienced some serious misgivings about whether artistic discourse had any impact whatsoever on the arc of Western democracy. I still have doubts, but in the tumultuous weeks since the inauguration I've seen reasons to be heartened. Even before the Orange One placed his small left hand on two Bibles (one gifted by his late mother, the other — in a jaw-dropping desecration — having been used by Abraham Lincoln), there had already been a groundswell of protest art: from the "Nasty Women" exhibition at the Knockdown Center in Queens and its nearly thirty satellite exhibitions around the country and the world; to the sprawling pro-immigration exhibition "With Liberty and Justice for Some" at Walter Maciel Gallery in Los Angeles, to name only a smattering. Then in early February, the Museum of Modern Art pointedly rehung parts of its permanent collection with works by artists from the countries named in Trump's Muslim ban. Since then we've seen an exponential multiplication in the artistic and curatorial responses to the new administration's litany of assaults on civil liberties and base-line standards of global diplomacy.

These would be celebration-worthy rallying cries if it weren't for the haunting question: What good did all of this indignation do when we needed it the most, on Election Day? As an art lover, critic and citizen, I can't shake the feeling that Trump's election was not only a demoralizing blow to reasonable, level-headed pragmatists at home and abroad, but a sobering reminder that the often abstruse concerns of contemporary-art discourse are increasingly diminishing artists' and arts writers' relevance within our national conversation. Many of our pet issues have been exposed as dauntingly esoteric in the face of the 2016 election's monolithic narrative: the sob story of the allegedly disenfranchised, disrespected, disillusioned, and castrated blue-collar white males, and the 53-percent of white women voters who love them. The gaseous puffery that passes for substance in much of our specialized discourse in art theory, criticism, and the academy is undeniably marginalized in the age of the screen, the click, the flame, the Like, the tweet, and ultimately the hand-grenade vote.

Let's face it: Parsing distinctions between irony, post-irony, and post-post-irony is not water-cooler chitchat in the American workplace. Jeff Koons' commodity critique, Benjamin Buchloh's Marxist critique, and Okwui Enwezor's globalist vision in the 56th Venice Biennale are not dinner-table topics in the American household. Pastiche, appropriation, social practice? The nation yawns. The body as agent versus object, the twilight of the mid-level gallery, the ascendancy of curatorial-studies programs? Pass the remote control. The concerns of contemporary art are not the concerns of Main Street, Wall Street, Love Street, or any other boulevard outside the cul-de-sac of critical theory. Artforum values are not American values. Donald Trump as painted with Sarah Levy's menstrual blood; Trump drawn naked and penis-challenged by Illma Gore; Trump as a pile of poo courtesy street artist Hanksy could not save us from the legions of blue-collar white males who were mad as hell and not going to take it anymore, or from James Comey's and Vladimir Putin's insidious incursions upon our democratic process.

And yet. I felt my skepticism beginning to crumble the instant I approached the United States Courthouse in Eugene, Oregon, on January 21st to participate in the Women's March. Seeing the thousands of fellow marchers thronging, chanting, singing, hoisting devilishly satirical anti-Trump signs, I realized, perhaps for the first time, how important it is to band together to defend shared values. I hail from Generation X, which has famously lived in the long shadow of the Baby Boomers. But in that moment in Eugene, I got a hit of what the 1960s protest movement must have felt like: the strength in numbers, the dubious blessing of a common cause and common enemy, the adrenaline rush of activism activated. There was a visceral feeling to it that was about as far from an esoteric essay about zombie formalism as you could get.

I think there's something we in the creative world can learn from this. Artists, scientists, and philosophers have long led the progressive charge; that's why they've been censored and pilloried long before Robert Mapplethorpe, Andres Serrano, Sally Mann or Chris Ofili (don't forget about Galileo, Socrates, et al). But ideas are most potent in the din of the agora, not in the sequestration of choir-preaching. Artistic discourse is not just a circle-jerk for people who like to say "dematerialization" and "figure/ground." It has real-world consequences and great power, if we only marshal it strategically. In the big picture, I submit we would do better to steer clear of the echo chamber of esotericism and stay focused on the contested terrain that matters most: the intersection of aesthetics and action.