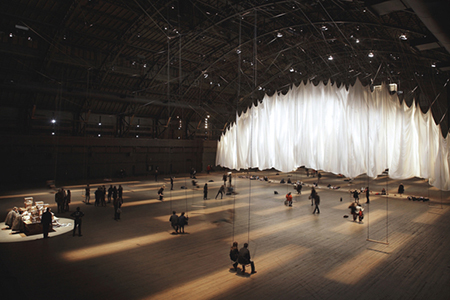 Last month I attended a performance by the Portland Baroque Orchestra that underlined for me the ways in which music and the visual arts overlap and diverge. During the concert, soprano Hana Blažíková traded complex melodies and flourishes with Bruce Dickey, who played an antique woodwind instrument known as a cornetto. As the two batted phrases back and forth with astonishing virtuosity, I thought how fundamentally different a musician’s mission is from a visual artist’s. The former’s modus operandi is interpretive, the latter’s generative. An opera singer, although she may improvise, recounts an aria from a pre-existing score. While it’s true that Maria Callas’ version of “Sempre libera” from Verdi’s “La Traviata” will never be mistaken for Beverly Sills’, it’s also the case that the aria will always be in A-flat, always have a certain number of measures, the tenor will always sing a phrase from offstage at an appointed moment, and the high note, if the soprano can reach it, will always be E-flat.

This is very different from a painter’s charge, a sculptor’s, or any artist who starts with a tabula rasa and presumes to fill it with something new — preferably something no one has attempted before in quite the same fashion, and even more ideally something that upends fundamental paradigms about the nature of art itself (thank you, Marcel Duchamp). This is a dauntingly tall order, and one that gets the better of most artists. The pressure to create something intrinsically revolutionary, instilled ferociously in art schools, is intense.

It was not always thus. Pre-modernist art history abounds with tropes that artists returned to faithfully, century after century: allegories of Venus and Cupid, David’s slaying of Goliath, recumbent odalisques, still lifes with horns of plenty, to name only some of the most rudimentary. In great swaths of the east Asian canon, artists and artisans have unapologetically revisited genres and subject matter for millennia, wringing them with respect and invention for every rich drop of enduring value they possess. A revisitation of a pictorial idea needn’t be a radical reimagining; it can simply be the latest iteration of a long stylistic tradition. This mode of artistic homage is more akin to the interpretive rather than the creative arts. But modernism in particular has elevated to perverse heights the imperative for artists to induce what Robert Hughes famously invoked in a book title, “The Shock of the New.” It is not enough to pay tribute to an existing ideal, no matter how strong one’s technique; for better or worse, artists are expected to overturn the overarching discourse. In this conception, artists are not analogous to singers interpreting a score; they must compose their own score, and woe unto them if it is derivative.

The most recent tides of aesthetic fashion appear to be changing, however, away from the cult of artist-cum-composer and closer to the realm of artist-as-conductor. The reason for this pendulum swing is the ascendant phenomenon of interactivity. To continue the musical metaphor, the artist is increasingly grasping the conductor’s baton and turning over composing duties to the viewer. Works such as Random International’s immensely popular "Rain Room," Ann Hamilton’s interactive installation, "the event of a thread," and James Turrell’s "Light Reignfall" have made the participative experience the raison d’etre of the artwork itself. The parameters of a given work — be they computer-controlled raindrops, fabric and pulleys or LED lights — are prescribed by the artist but realized by the viewer, who gives life to the work in real time. The work’s rhythms align with the viewer’s movements or perceptions. Are these rhythms smooth legato or choppy staccato? Does the work have a visual or visceral crescendo?  Is its emotional tone in a major or minor key? It’s all up to the viewer.

Arbitrary lines between artist and viewer have blurred as selfie-snapping museum-goers — weaned on interactive apps, software and devices — see themselves more and more as would-be stars of their own aesthetic reality show. As a consequence, sadly, art is ceasing to reflect sociocultural movements and has become a glorified hand mirror reflecting the viewer’s narcissistic self-projection. And that development should be music to no one’s ears.