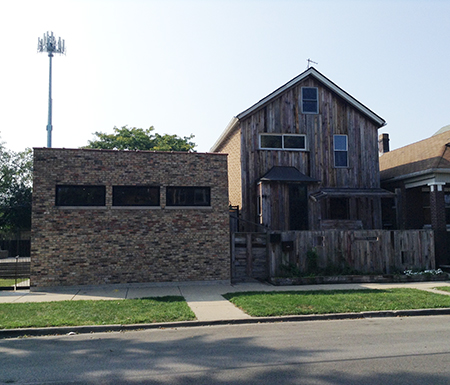 I returned recently from a Chicago stay that included visits to artist-produced urban development initiatives such as Experimental Station and the Dorchester Projects. They are not the only such civic projects imagined and developed by artists throughout the country, and all bring a spirit that is severely lacking in our political culture: They combine visionary and innovative thinking with collaboration and civic mindedness. They elevate their makers in a manner that elevates us all. Our political leaders would do well to heed these examples of purposeful experimentation that offers clues as to how we may better organize our lived environment to the social and economic benefit of our people.

If artists engaged in civic-based projects are dedicated to a love of aesthetic form and process as central organizing principles, it is not asking too much of our political leadership that community service serve as the pole star of electability. Without this combination of character and imagination power leads to domination, exclusion and decay. Ideally political leaders help to stimulate such activity; realistically they at least facilitate where they can. Too often they either block or distort such expression in order to serve their own political interest and that of allies interested only in subjugation and profit.

In barely more than a month Americans will elect a credible, seasoned, intellectually acute and moderately liberal President or a dictatorial sociopath. We have endorsed in prior Presidential elections, attempting to explain our choice in the context of art’s devotion to creative freedom and the evolution of process. The jarring element in this election is the existential risk one candidate poses to democracy itself, to a culture of civil discourse, indeed to the security and the very lives of millions of American citizens and others around the world. The distinction between these candidates transcends party affiliation and ideology.

Hillary Clinton has been subjected to scrutiny and partisan attacks over her entire public service career, but she has never wavered in her activism, generally directed towards the goal of greater access and equity for groups of people previously denied. If there have been occasional cause for concern — those damned emails for example — those instances are typically the product of her self-protective instinct is reaction to the intense hostility of her political foes. Most of us would simply run away; I know that I would not put up with it. If she is attracted by a desire to wield power, what President has NOT been? Unlike Mr. Trump, her interest in the public good is the reflective balance between the elevation of self and a genuine urge to serve.

Clinton, and for the most part her fellow Democrats, share a serious interest in building the social and economic tools for Americans to continue to evolve as an inclusive and empathic society, not one trying to purge itself of impurities. Access to both health care and education are regarded as rights, not privileges. The protection of the average consumer from the sometimes predatory practices of extremely powerful corporations (such as Wells Fargo’s recently settled transgression) means something. The arrival of global climate change as the major environmental challenge of our time is understood to demand urgent response. The threat of terrorism is approached with care not to undermine the values that make us both a great and good nation.

Mrs. Clinton’s proposed approach to foreign affairs reflects these values, while Mr. Trump proposes we use more torture and that we “kill the terrorists’ families.” Mrs. Clinton proposes that we both vet and permit entry to more immigrants fleeing brutality in their home countries, while Mr. Trump would seal our borders and deport millions based on race and religion. Mrs. Clinton proposed that we nurture and expand our historical network of alliances that produce the post-war Pax Americana, while Mr. Trump proposes that we set up a protect for pay racket and suggests that never before has the world been in such a terrible state. Sir, over 50 million died in World War ii, 30 million in World War I. Not so long ago.

The trend towards a globalized economy has produced a recently bumpy ride, in part a natural consequence of any major transition and in part the unnatural product of dreadful policy and regulatory decisions that led to the Great Recession of 2008. While Mrs. Clinton proposes crafting trade deals that balance the furtherance of American-style worker protections and rights against a steadily more open trade environment (yes, her rejection of the TPP agreement was clearly a matter of political calculation), Mr. Trump pretends that trade deficits equate to our tax money being sent abroad rather then a reflection of our great spending power. We are one of the least taxed industrial nations, not the highest, as Mr. Trump prevaricates. Under President Obama’s liberal guidance our unemployment rate has been about halved since the Great Recession and the Dow Industrial Average has rise from about 6,500 to over 18,000. And last year our average personal income grew at the greatest one year percentage in nearly a half century. Mr. Trump has no shame in simply peddling a completely false narrative. He makes up his own facts, while Mrs. Clinton is sometimes unwilling to tell us what we want to hear because her prescriptions are based in reality. She is interested in solving problems more than pointing them out — or exaggerating them beyond recognition.

The sheer breathtaking dishonesty of Mr. Trump transcends public issues because it is how he has always conducted his businesses: his scams (Trump University); rental discrimination (denying African Americans access to his family’s apartment properties); operating an uncertified non-profit foundation (that uses of other people’s money then used to pay for his own legal services, political donations, vanity portrait paintings, etc.); stiffing contractors who worked on his real estate development projects (“so sue me!”). As one of his marks pointed out, let’s not give him our credit card, we’ll never get it back. The sheer nerve that he and his surrogates attempt to portray the truly do-good Clinton Foundation as a “pay to play” operation only describes himself, not Mrs. Clinton, who receives no personal income from that organization. That millions of voters in the world’s oldest democracy are in denial about this man’s integrity, or take it as an indication that he will stiff our adversaries even as he benefits us is naive and fatuous.

If millions of otherwise good people are eager to vote for Mr. Trump, their loyalty is misguided and will come back to haunt them should he be elected. Mrs. Clinton recently and correctly alluded to the fact that many among the most devoted core of Mr. Trump’s supporters are racists, bigots and xenophobes, and that such people are “deplorable.” These are indeed horrible people, and any enlightened American must, as President Roosevelt said in 1936, “welcome their hatred.”

Some Americans have toyed with casting their vote for a third party candidate. As Bernie Sanders stated, “This is not the time for a protest vote.” You risk burning down your own house. Don’t be a damned fool. And, for heaven sake, do not fall for the false equivalency that Mrs. Clinton is somehow as unscrupulous and dishonest as Mr. Trump. This is just not so.

The false equivalency lie is the single most important tactic (along with gross exaggeration — a two percent hike in the top marginal tax rate during Bill Clinton’s Presidency was going to “destroy the American economy") that the Republican party has used repeatedly to produce a degree of electoral success in recent decades. When out of power they block and diminish Democrats' best efforts to implement meaningful policy — which they then use to declare said policies a failure. We believe country first Republicans will succeed in bringing back a degree of integrity to their party, but only after Mr. Trump’s departure from the political stage; and the rebuilding will take years. If this is, as some on the right argue, a “change” election, the needed change will not only be to vote for Ms. Clinton, but for Democrats to vote in down ballot races in order to effect a change where the change is most needed: in Congress.