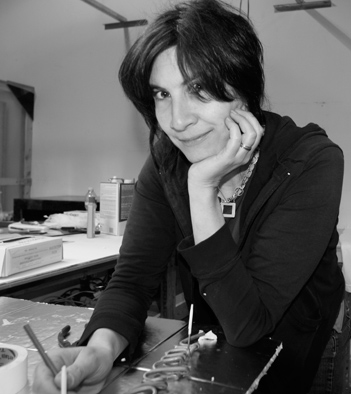 Few would confuse Victoria Haven’s work of the past decade with traditional painting. But it wasn’t always the case. The Seattle artist uses manmade materials like tape, nails, rubber bands, contact paper and aluminum to “draw” three-dimensional space. Haven graduated from the University of Washington in 1989 with an MFA in painting. For the better part of a decade, she produced formal abstract and landscape paintings on canvas or panel. “To me they always looked like someone else’s work.” She explains, “There was something in the use of that material that related too much to tradition, and I wanted to free myself from it but I didn’t know how.”

In 1996 Haven entered graduate school at Goldsmith College in London, trading in her paintbrush for plain materials with which she forged an entirely new direction.

Paint was eschewed for nails driven directly into the wall with rubber bands stretched between each peg. Haven thought she would return from London a sculptor, but explains: “It was my relationship to the wall and the material that interested me. I didn’t need to go into the object in the round. I was satisfied exploring this place in-between two and three dimensions.” Since then, she’s pushed at both literal and figurative boundaries. For her Rabbit Hole series in 2004, Haven used ink on tape on paper to create arched and angled forms into which the viewer could mentally slide. Rabbit holes evoke many things, not least of all Alice in Wonderland’s legendary free-fall: a plunge associated with adventuring into the great unknown. Haven has gone forth fearlessly. In the last few years she’s captured – and held – the attention of her viewers with works that suggest portals to both interior and exterior space, psychological and physical terrain. In 2007 The Frye Art Museum asked Haven to recreate an altar for a work by Franz von Stuck, a 19th-Century Symbolist painter. Von Stuck’s paintingSin, in the museum’s permanent collection, depicts a woman wearing little more than a serpent coiled around her neck. Haven encircled Sin’s ornate frame with radiating sheets of reflective gold Mylar cut in a lace-like geometric pattern and pinned an inch off the wall. The resulting structure suggested a web in which both the viewer and subject were ensnared.

Her one-person exhibit “Higher… Higher…” at Greg Kucera Gallery combines photographic prints, works on paper, wall installations, and text works, all of which reference gravity – or the lack thereof. Haven considers herself a painter; but rejects the rigid format of canvas or panel. The pieces in “Higher… Higher…” lack obvious horizon lines, resulting in forms that appear to float, unanchored in a space of limitless terrain. Works such as Oracle—part of a series of selenium-toned silver gelatin prints—marry the past to the present: they revisit the artist’s earlier constructions of nails and rubber bands and, by incorporating photography, also explore the ethereality of visions, the hard task of capturing in concrete form what the mind mysteriously concocts. “I like to think of them as traces of an idea,” she explains. “Part spontaneous sculpture, part drawing, part documentation.”

The elegance of Haven’s forms often eclipses the simplicity of the materials used in their making. “I’m interested in the material transcending itself—or not announcing itself right away. They’re self-contained worlds that substitute the conventions of gravity and traditional space with their own internal rules. The core of my work is finding the best possible material to convey that.” Using minimal means to masterful ends, Haven’s work not only rises, it soars.