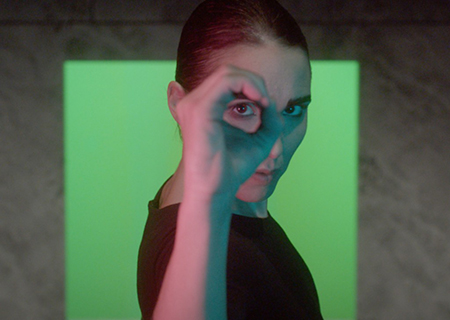 The artist’s mission — to distill the tragicomedies of human experience into cathartic forms that can be experienced by others — has to be one of the most daunting job descriptions of any occupation. It’s made no easier by its corollary expectations: to also support oneself financially through art-making and to judge one’s worth against standards set by giants with names like Michelangelo, Matisse, Frankenthaler and Koons, who somehow managed to beat the odds and ascend into the canon. I may have never seen a more powerful expression of these cunundrums than “Parade” (2014), a 38-minute film by Berlin- and L.A.-based artist Shahryar Nashat, which I saw last month during the final weeks of Australia’s Sydney Biennale. A reimagining of Jean Cocteau’s 1917 ballet (which boasted choreography by Léonide Massine and scenic design by no less than Pablo Picasso), Nashat’s film dynamically presents contemporary choreographer Adam Linder’s updating of the Cocteau piece. In Linder’s vision, the work concerns the exasperating nature of the artist’s struggles with their own integrity, as well as the pressures of careerism and the art market.

In each vignette, a twelve-sided geometrical form, obnoxiously acid-green in hue, sits on the floor, emitting an unceasing, high-pitched drone, which seems to symbolize ambition, self-doubt, and the expectations of the outside world. Three dancers perform, dressed in bizarre wicker garments that seem devilishly designed to constrict their movements even as they attempt to express themselves. The first dancer is auditioning for an unseen stage director, who glibly and condescendingly commands her to execute a series of moves. She obeys perfectly, then, as if receiving a one-to-ten score from a panel of jurors, holds up six fingers. To impress these offstage judges, she brilliantly improvises a new choreography, ending by defiantly holding up seven fingers. “If that doesn’t earn me at least an extra point,” she implies, “you can go screw yourself.”

Another sequence features a willowy male dancer executing grueling steps over and over at the stage director’s behest, to the point of exhaustion. All the while, the green dodecagon emits its shrill, piercing whine. Finally, as if about to vomit from over-exertion, the dancer hunches over. In his face you can see he’s contemplating whether to give up. Instead, he gets back on his feet and dances his heart out to Mikis Theodorakis’s exultant theme from “Zorba the Greek.” It’s breathtaking, heartbreaking, the embodiment of everything a creative person strives for. When he finishes, Theodorakis’ music fades out, replaced by that green thing’s unwavering whine. It never went away — the judgment, the insecurity, the never-having-done-enough.

This is the artist’s plight: to reach down inside themselves with every show, every body of work, to put their innermost souls into the hands of viewers, curators, gallerists, collectors, and critics. But, in nine cases out of ten, nothing will sell, no reviews will be written, no quality feedback will be offered. The exhibition is up for a month and then down, the work returned and put into storage as if the whole thing never happened. No one likes to talk about it, but this is the way it goes more often than not, and yet the most committed artists lick their wounds and dive into the next series with a tenacity that is dogged verging on fatalistic.

As the end credits roll, the stage director assumes what he calls his “heroic voice,” mimicking the braggadocio of hip-hop singers, intoning over and over the phrase: “Where’s my motherfuckin’ horse? I’m gonna ride me this ballet right into the canon.” And so the narrator — and through him the filmmaker, choreographer, dancers and everyone else involved in the production — holds out hope, even at the end of this withering critique of careerism, that this very piece will elevate them into the pantheon of that one-thousandth of one-tenth of one percent of artists who are remembered at all, much less for fifteen minutes.