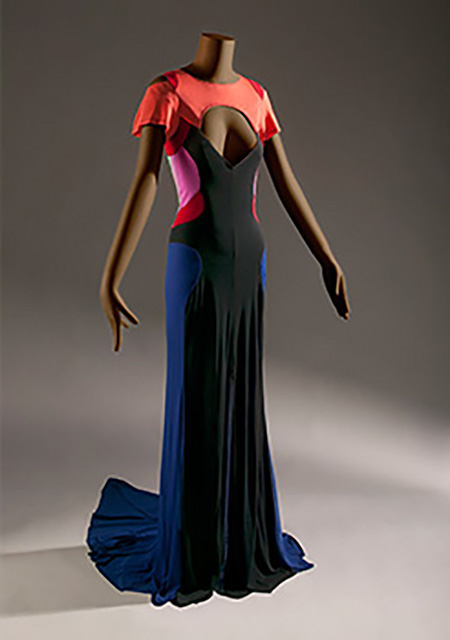 Two art museum exhibitions concentrating on haute couture fashion designers offer a wonderful opportunity to see dozens of spectacular, handmade — and high-end — clothing for men and women. They effectively compare two of the more obscure or overlooked wings of contemporary high fashion: Native American and African-American. Did you know that American Indian fashion designers date back to Lloyd "Kiva" New, a Santa Fe designer who set up shop in 1946? Or that "Ebony" magazine used touring fashion shows to raise millions of dollars for civil rights? These are just two of the many surprises visitors will experience in "Inspiring Beauty: 50 Years of 'Ebony' Fashion Fair" at the Bellevue Arts Museum and "Native Fashion Now: North American Style" at Portland Art Museum. Both surveys are a delight to behold; each is backed up by ultra-serious commentary and scholarly photo-documentation.

Those glancingly familiar with fashion history may recall the Ralph Lauren American Indian look of the 1980s and 1990s, as well as the earlier breakthrough when Yves Saint Laurent put African models on his runway for an then exotic collection in the mid-1970s. Before that, "Ebony" publisher Eunice W. Johnson had been using them to parade Paris and New York fashion for years, both in the magazine spreads and in the increasingly celebrated touring shows. As co-curator Joy Bivins puts it, "Bringing those garments to a black audience and putting them on black models said … ' You are the standard of beauty.' It was a revolutionary act." Forty separate ensembles are seen on mannequins in a dramatic, stimulating installation. Because the models are on low plinths, we feel like we are standing right next to them. The effect is like going to a well-dressed party.

Before I mention the African-American couturiers Mrs. Johnson discovered and promoted, let's notice the amazing dresses, suits, coats and, of course, a concluding bridal gown by 20th-century Paris megastar Ungaro. Just to see a gathering together of original dresses by Dior, Givenchy, Balmain, Alexander McQueen and Vivienne Westwood is a rare occasion in Seattle. Add to these exquisitely tailored, often beaded and embroidered outfits by American designer giants like Pauline Trigère, Bob Mackie, and Bill Blass; the overall effect is dizzying and delectable.

The men's fur coats by Scherer, Missoni, Biagiotti and Dimitrios recall a "Shaft" aesthetic. Todd Oldham's wildly appliquéd floral gown was a custom-order for "plus sizes," another couture first and one that accommodated women's real bodies, not just the anorexic teenagers seen in many magazines.

Though less well known, the Native American designers, featured in "Native Fashion Now" have made up for a comparative lack of exposure by attracting attention with dresses, shoes and coats that draw upon Paris and New York, but also have unmistakable references to Northwest Coast "formline" drawing and weaving; Southwest leather and fringe; and indigenous headdresses and necklaces. With a devoted following, American Indian designers span the decades from "Kiva" to Wendy Red Star, but have come into their own only in the past ten years.

Also stunningly displayed, "Native Fashion Now" is attracting large crowds, with Portland being the exhibit's only West Coast venue. Costume, craft, decoration, design, and shape are already a part of Indian attire traditions, so upgrading to couture was logical. The curators divide the makers into "Pathbreakers," "Revisitors," "Activators" and "Provocateurs," all of which help organize a rather overwhelming panoply of ensembles for men and women.

It's fascinating to compare Elizabeth James-Perry's ensemble of 2014 in the Portland show to Christian Lacroix's peasant-style "Evening Ensemble" (1988) in Bellevue. Both lift rustic models of flared cloth and black-and-white patterns, but are still worlds apart from one another.

There is more of a sense of exchange and interplay between minority and mainstream Paris designers in the Portland show. It's as if, after their big break in "Ebony" runway shows, black designers now may have to play catch-up with hip Native American fashionistas. It didn't help that Patrick Kelly died of AIDS in 1990. His posthumous inspiration may be as large as his lifetime contributions. As seen in both surveys, American high fashion is now inextricably indebted to both movements.