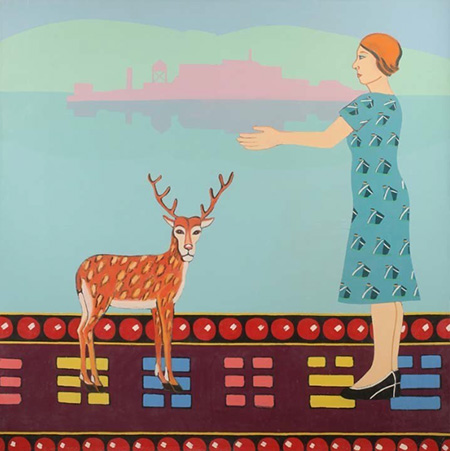 I have been fortunate throughout my career to have had many philosophical conversations with artists. In this and some subsequent columns, I want to reflect on some of the things I have learned from them, for I have found that the wisdom of artists has played a huge role in shaping my own thinking and personal growth.

Three of the artists who impacted me greatly, all women who have passed on, are having major exhibitions around the country this season. A five-decade survey by Lee Krasner has just closed at Robert Miller Gallery in New York. The first major retrospective by Claire Falkenstein is currently on view at the Pasadena Museum of California Art. A selection of Joan Brown's paintings and works on paper is being shown in San Francisco at Anglim Gilbert Gallery's new Minnesota Project Space.

I met Krasner only one time, when I was a graduate student studying the relationship between automatism and the origins of Abstract Expressionism. I actually went to interview her about Jackson Pollock, because my focus was on the group drawing sessions that included Matta, Pollock, Baziotes, and Motherwell. First of all, Krasner had grace. She was protective of Pollock, and as we got to know one another through conversation, she morphed into being my surrogate Jewish mother. She mentioned how the wives weren't allowed to participate in the drawing sessions; they were relegated to the kitchen. This validated for me what I already suspected, that women artists weren't being treated as equals. She talked about mystical things, a lifelong interest of mine. In particular, she compared automatic drawing to her childhood practice of writing the Hebrew alphabet from right to left. This got me interested in the meaning and symbolism of Hebrew letters, which I later connected to Wallace Berman's belief in the kabalistic idea that the universe was created when God uttered the Hebrew alphabet in sequence.

Falkenstein and I met after I singled her out for praise in my review of the "Americans in Paris: the 50s" exhibition at Cal State Northridge, organized by the late Merle Schipper. In my opinion, Falkenstein eclipsed her male counterparts. So appreciative of what I wrote, she sent me a postcard and, for a couple of years, I hung out with her at her Ocean Front Walk studio in Venice Beach. Her guests were always asked to write something in her "friendship book." Shortly before her death in the late 90s, when she was in failing health and had lost her memory, I made a final visit, at which time I opened the book to show her the self-portrait I had drawn in it years earlier. Claire's vision was about the shape of the universe. She talked about "the never ending screen" and "structure and flow" with exuberance and optimism in her voice. She loved the way the cosmos works. She described that "heaven isn't upwards, it's outwards," bringing a scientific perspective to one of religion's interpretations of life after death.

I spent a morning with Joan Brown in her kitchen, drinking coffee and talking about esoteric ideas in preparation for a panel I organized for the San Francisco Art Institute on "Symbolism in Contemporary Art." Brown, like the Bay Area mystic Surrealist Gordon Onslow-Ford, was interested in reincarnation. In her later works, she used a lot of symbols, such as pyramids and cats, to explore this idea. When I asked her during the panel how she felt when others' interpretations of her symbols differed from hers, she said she loved that. Today, of course, it is commonly accepted that the viewer brings something to an artwork, i.e. a work's meaning does not begin and end with the artist's viewpoint. Brown also expressed her philosophy of life on this panel, stating the importance of carrying "no excess baggage."  As a baby boomer who has entered my senior years, this advice has stuck with me through the years. Material things can accumulate over time and ultimately become a nuisance. I agree with Brown: streamlining and purging is healthy.