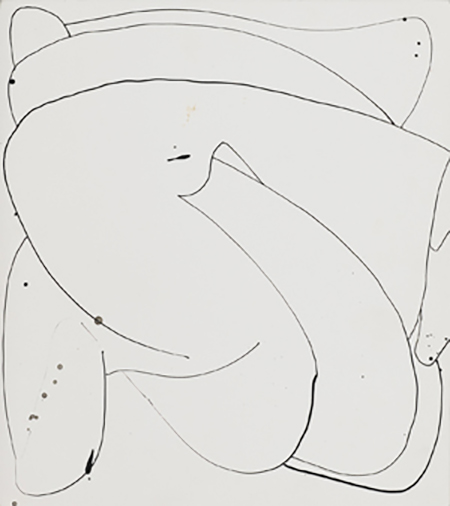 There's even more sex than usual wafting in the Los Angeles air at the moment, as the spring art season yields to the sultry summer that looms. This has more than a little to do with "Mapplethorpe: The Perfect Medium," an exhibition showing concurrently at the Los Angeles County Museum of Art and the Getty Center. Robert Mapplethorpe was of course one of our preeminent cartographers of flesh, flowers and famous friends, all of which he documented with a formalism so immaculate that it bordered on the sinister. And yet in some respects, the most iconic images created by Mapplethorpe in his sexual-provocateur mode — the imposing phalluses and bullwhip-sprouting backsides of "The X Portfolio" — are so exquisitely and hermetically composed, they read more as sadomasochistic mannequins than living, breathing, panting, moaning human beings in flagrante delicto.

It really oughtn't come as a surprise that such frank and exuberant works should spring from the hand and imagination of a master of lyrical abstraction. There are plenty of ties between these nudes and Francis' better-known work in action painting. For starters, the drips, dribbles, splatters, and spurts that Abstract Expressionists flung onto their canvases have been construed as psychosexual, and more crudely as ejaculatory, from the advent of the movement. To the dismay of feminist theorists at the time and afterwards, the very act of a propulsive gesture is all-too-easily construable as a patriarchal display of presumed male virility. Although the hypermasculinization of AbEx, at least in the public mind, was embodied by Jackson Pollock, Francis was also a creature of powerful, if more idiosyncratic, erotic charisma. Married five times, linked romantically to everyone from Joan Mitchell to Kiki Kogelnik to Liga Pang, he may be best remembered for his "Blue Balls" series, which referenced the sexual frustration referred to by that sophomoric slang, as well as the renal tuberculosis Francis suffered while creating the paintings, a condition that threatened his life and afflicted him with side effects, including a severe swelling of the testicles.

Sex — as both joy and pain — was never far from the surface in Francis' oeuvre. Although his paintings and prints are generally viewed as pure abstraction, in fact they are replete with imagery allusive to sexual penetration (as in his "Flying Love" of 1963) and sexual anatomy (as in his "Round Breast of Jayne Mansfield" of 1964). Although Pollock has become the poster-boy of the AbEx demon-wrestler, using paint to exorcize the bogeymen of the unconscious, Francis was also a lifelong explorer of the often destructive and creative links between the spiritual and the sensual. And it shows in the erotic drawings. One senses in them, as in the paintings by which he made his name and fortune, that the artist knew all too well that life, and the sex drive so inextricable from it, is messy, tragicomic and uncontainable. Desire, and the trajectories that ensue from it, are states and acts not only of bravado but also of scorching vulnerability.