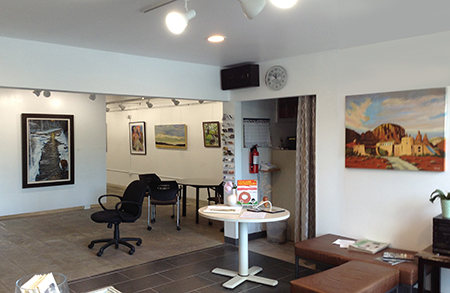 Not unlike the layered economy of our culture, there are a handful of elite galleries whose artist/brands tend to crowd out everybody else. A number of contenders present artists who are building or have sustained a dedicated following that has not reached the higher reaches of the museum world or more influential collectors. I know from experience that many of these galleries regard themselves as a sort of middle class; many proved vulnerable to the impact of the Great Recession, and that humbling experience knocked many back to survival mode for years. Still, let’s think of these generally successful galleries as the upper middle class of the art world. Then there is the still larger mass of galleries of varied stripes that present artists who might be broadly equated with the range of who, in the film industry, are vaguely familiar character actors and extras.

These artists form the crowd scenes that complete a rich tapestry, but who, when you take a closer look, make up a deeply complex creative middle class. They range from artists of immense potential but limited experience to Sunday painters who have persisted in their modest practice for decades. The quality of talent and dedication swings wildly and unpredictably from laughable to brilliant, from the readily dismissed to the fresh discovery. Their support system is generally limited to friends and family, but you’d be surprised by the sheer popularity (as measured in sales) enjoyed by some.

Many hold down a regular day job, some rely on a spouse or other family support to feed their habit, and I have never, ever found the slightest reason to complain about that. The devotion that so very many artists pour into their work is, to my way of thinking, a beautiful thing, one good measure of lives made more delightful, and a signifier of a maturing society. Art should never be pigeonholed as a “leisure” activity because very few practitioners take it that way. Make no mistake, these folks are frequently seasoned or aspiring professionals.

A good number of the outlets for this middle class of artists are in fact operated by the artists themselves, often under the direction of a small staff. As Ken Ronney pointed out during a recent visit to the San Fernando Valley Arts and Cultural Center, “Each affiliated group of artists are responsible for selecting whomever they present when it's their turn.” Ronney is a retired engineer who has produced kinetic sculptures for the last 15 years and serves as President of the California Art League, comprised of a couple hundred dues paying member artists — their dues providing the budget by which they mount several large group exhibitions per year.

That there are so few galleries located in the San Fernando Valley automatically elevates the importance of this cavernous exhibition space. Artist-run galleries similar to this one (to one degree or another) often play key roles in the outlying districts of Southern California such as Pomona, where Gallery 57 provides a focal point for artists with studios in and around the Arts Colony. The Chaffey Community Museum of Art is not really a museum, but another of these artist driven spaces on the western edge of San Bernardino County. Outside of local college galleries and the Riverside museums there are simply no serious privately operated galleries in the Inland Empire. But there are artists. In fact that is the point: the tens of thousands of artists are as dispersed as the geography is diverse.

One of the longest running alternative spaces, so-called going back to the early 1970s because artists then sought to exhibit what they assumed was unsalable avant garde work free of the commercial constraints of the gallery system, is in downtown Santa Ana, the Orange County Center for Contemporary Art. At OCCCA artists have long run the show, while keeping the program concisely informed with an eye on the latest contemporary art from Los Angeles and around the country. San Pedro may be the most isolated town in the greater Los Angeles area, yet it has boasted a significant creative community for decades. The South Bay Contemporary at the Loft, the newest among these artist operated galleries, is based in a building chock full of artists’ studios. This is the brainchild of local dealer and artist Peggy Sivert-Zask, who shifted to a non-profit model after running a more conventional private gallery in upscale Palos Verdes, which has long been home to the Palos Verdes Art Center, and its newer spin-off, the Palos Verdes Artist Studio Gallery, a genuine artists’ co-op.

None of this is to imply that this phenomenon is a product of the periphery. The central hub of Los Angeles hosts a number of artist-rich communities between the aforementioned Downtown loft district and the once bohemian Venice beach hipster scene. At Santa Monica’s Bergamot Station we see acronym named galleries FIG (First Independent Gallery) and TAG (The Artists Gallery), both featuring a roster of artist members who in many cases are veteran university art professors with lengthy track records, but who eschew the commercial gallery system.

In a way the Los Angeles Art Association’s Gallery 825 brings us full circle. It is the oldest such gallery in Southern California, founded in 1925, and certainly boasts the most expansive roster of artist affiliates of any such organization in the region. If it suffered a lengthy slide from one of Los Angeles’ premier art venues into a marginal role in the late decades of the last century, in more recent years, particularly during the last eleven years under current Director Peter Mays’ leadership, it is the finest example of an artist driven gallery establishing seemingly endless opportunities for its members to present ambitious art in both the home and other major public venues, and to grow both creatively and professionally. You might notice that the character of these artist-based galleries is actually quite varied, which brings me back to the larger point. The crowd of non-elite artists may not be stars, but they are anything but an undifferentiated clump. The creative soil is sufficiently rich to nurture and challenge many, many more artists than will ever be curated into LACMA or the Getty, or represented by Gagosian or L.A. Louver. But they are essential, and testimony to the fact that, in the art world at least, the middle class is very much alive and well.