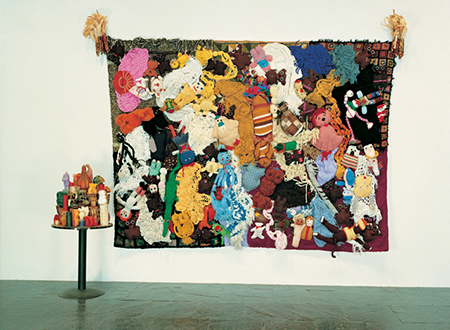 Mike Kelley, “More Love Hours Than Can Ever Be Repaid” and “The Wages of Sin," 1987, stuffed fabric toys and afghans on canvas with dried corn; wax candles on wood and metal base, 90 x 119 1/4 x 5”. Courtesy the Whitney Museum of A

Spending one’s career in art, whatever the discipline and whatever one’s role, is a privilege. Setting aside the small sliver of the marketplace elite, most of us are willing to pay for that privilege in a multitude of large and small ways. We are drawn to the idea of the freedom to exercise self-expression and the ideal that it can be sufficiently transactional so as to sustain itself. If you have never tried it, you have no idea how empowering this is. However, like nearly everyone else, artists do get caught up in the immediacy of events and the personal details of daily life.

Long ago I arrived at a conviction that the essential element to be injected into the transactional relationships that produce the means of support (social as well as financial) is one’s authenticity. To be your authentic self in pursuit of the creative process: there is a virtuous cycle that comes from that. Anything must be possible creatively precisely in order to better grasp that authenticity, which is elusive not only because it is so difficult to see oneself clearly and honestly, but because our own history constantly revises that truth. As we approach the authentic we make gains, and as we make gains we push it away. It is not a Sisyphean chase because the growth it produces is real. But the task can never be complete. Art is not the achievement of a masterpiece, it is the trajectory of its process. If you regard yourself an artist, I suggest that you must be able to embrace this principle.

Authenticity. It was always a word that I could repeat endlessly. I could wrap it in a tortilla and swallow it, stuff it in a time capsule and recover it, tie it to the bumper of my car and drag it for miles down Wilshire Boulevard, run it up the flagpole of any conversation and feel confident that a worthwhile point could be made. Look at anybody’s art form and start a meaningful conversation.

So why do our domestic politics have to render cracks to the foundation of this sturdy edifice? The structure of liberty that was for me unshakable came from a belief, in fact to me a knowledge that the world had come to know better. The Pax Americana into which I was fortunate to have been born represented an auspicious moment, a turning point in our historical development. If most fellow citizens could no more appreciate Mike Kelley spinning art out of stuffed dolls than I could grasp the mathematical argument for string theory, there was always a space to pursue both and so much more. The authenticity choice always led to other great words like individuality, possibility and diversity. More words that ring with moral virtue.

I don’t understand how it is even possible that millions of Americans, not enough — yet — to win a national election, verbalize this term, so rich, so vibrant when pronounced the right way. It comes out their mouths with a stink that has marinated for millennia. I hear that word, “authenticity,” on a news program and it penetrates beneath my skin into my liver, my thyroid gland, my gonads to make them shrivel. It was gorgeous, Monet’s own hand elevating the lilies at his Giverny estate; suddenly it is the right hand panel of Bosch’s “Garden of Earthly Delights.”

It was not merely the first and brightest landmark on the roadmap to aesthetic pleasure and intellectual insight. It was how I discovered America, the key to translating the idealization of the founding fathers into a functioning reality: Authenticity. It was the vehicle by which we looked at ourselves in the mirror and produced brilliant responses to our historic worst practices: Authenticity.

Well, we have been here before. Creative artists have been accused of conspiring with foreign enemies and of unforgivable acts of apostasy. Americans of Asian descent have been interned (and that precedent, it is now boldly suggested, implies that we surely are justified to do so again in the right circumstance). A fake civilization was built on breaking the bodies of unwilling Americans of African descent. The way we apologize, dear fellow Americans, is by understanding that our authentic America comes from our capacity to grow into greater alignment with the idea and ideals that America invented. The creative enterprise lies at the very heart of achieving that identity, and that heart has never beat with greater vigor. Yet we are veering dangerously close to giving up hard won territory in the name of a false authenticity that is really an excuse. Those who would fall into fascism or worse out of fear of our most barbaric enemies themselves are succumbing to their own worst instincts, transforming into Americans in name only but traitors to America at their core.

We will prevail in this clash within our own civilization not by fear or force of arms but by being true to our creative selves. This new year will not be simple or pain free. Let us rise to the occasion.