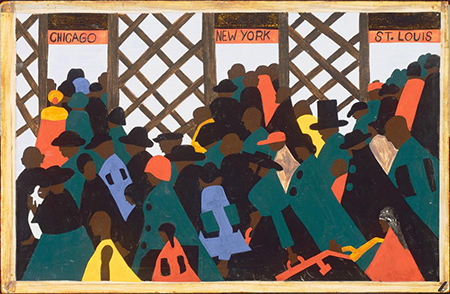 Jacob Lawrence, "No. 1: During the World War There was a Great Migration North by Southern Negroes" from "The Migration Series," 1940-41, careen, tempera on hardboard, 12 x 18"

Kudos to Alexandra Pelosi, Congressional superwoman Nancy’s daughter and one of the best documentary filmmakers going down right now. Her latest, “San Francisco 2.0,” bravely sends out a warning that Silicon Valley has launched a pre-emptive strike on America’s most valuable peninsula that is noticeably trending historical hippieville into a a preserve reserved for rich geeks only. As DeWitt Cheng speculated [August 14, 2015-Ed.], Bay Area burbs such as Vallejo, Richmond, Fremont and Hayward are becoming the new magnets in the diaspora that is catching artists up along with most everyone incapable of wielding an IT lightsaber. The heart of the downtown area surrounding Union Square has hosted a number of the city's most elite galleries throughout living memory, but the bleed-off to South of Market Street, the Mission District, Potero Hill and, yes, the East Bay is noticeable and suggestive of a steady push from the super-upscale center.

In Los Angeles the gallery migration follows an entirely different logic. Demographics have been circumscribed by traffic and development patterns for decades, fitfully thirty years ago, but by the second decade of the current century decisively enough to warrant widespread acceptance of the term "enclave." If you work downtown you are likely to live in or near downtown, and the amenities are catching up with you. Trust me, in L.A. it's about a lot more than just downtown, but between the Arts District becoming a tourist magnet and the Broad adding another jewel to the Grand Avenue diadem, that renaissance is an established fact.

The relative stability of the loft scene is not news, no more than the regular re-cycling of fears that the good times may soon come crashing to a tragic end. But the opening of a string of galleries just on the wrong side of the L.A. River is the current notable trend. Aliso Village abuts the Arts District with the kind of crummy old single story warehouses that a handful of artists choose over the multi-story lofts just to the west. Now the renovations are taking place with New York gallery toughs such as Maccarone and Venus Over Manhattan — and now over Los Angeles, too — opening exhibition spaces alongside adventuresome locals such at Chimento and Nicodim. Everyone is aware of the 800 pound gorilla that has, even in advance of its opening about six months hence, got the juices flowing is Hauser Wirth and Schimmel, which will be located on the eastern edge of the Arts District, just west of the river.

What sets L.A. apart is that the rise of a new cluster of galleries is not the product of an emptying of any of the established districts, with the possible exception of the city's original nesting grounds of West Hollywood. Bergamot Station, Culver City, and the recent rise of Hollywood are stable for now. Why? Commuting time. There are cultural constituencies spread around the L.A. Basin and enclaves (that word!) in areas of Southern California that might sound exotic, but for this or that segment of the population they are close to home, and that is all you need to know.

Interestingly, San Diego may be in the early stage of its own version of an L.A.-style cultural expansion. The rap on that city, culture-wise, has long been that it's too pleasant for anyone to want to pass the time indoors partaking in something as serious as culture. That's been somewhat unfair for decades; it's a solid artists' town, and murals and street art visible almost anywhere you care to go. The few galleries worth a visit in recent years have settled in upscale La Jolla, but now a group of distinctive neighborhoods — the Gaslamp, Little Italy, North Park and Liberty Station (the former Naval Training Center) — have all taken on new looks, with a cultural edge that includes a smattering of intriguing new galleries — thus far — as part of the mix.

It's not like California is the only place where these varied but interwoven trends have been going on, and given that this is so the point is twofold. There is net growth among exhibiting galleries because the physical environments and logistics of our major cities are offering natural opportunities produced by steady economic growth and an increasingly inclusive social environment. And the speculative bet is picking up steam that we are pushing beyond mere recovery from the Great Recession. Like it or not, the economics of the art world relies on a growing number of individuals with significant disposable income, and that number is clearly growing.

But second, and more importantly, it is driven by artists, whose numbers and level of ambition are both trending up. That's not a Chamber of Commerce talking point, it's real. I think we are living in a new world.