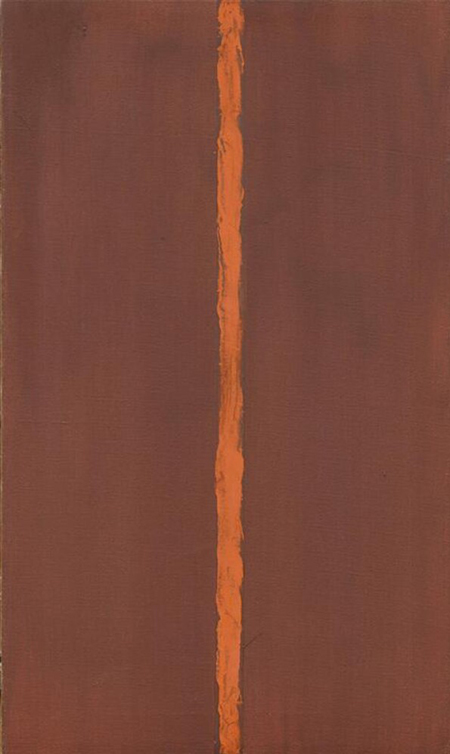 In my recent essays on Jesús Moroles and Wallace Berman — two artists whom we might not necessarily suspect have anything in common — I found myself writing about the "cosmos" and "the universe," terms which are almost interchangeable in referring to all that space out there that lies between planet Earth and infinity. For me, there is perhaps nothing more interesting than the things we cannot really know. And I am grateful to Moroles, Berman, and the multitudes of other artists who have provided us with and continue to create visually stimulating vehicles for imagining what might be, or even better, for feeling its presence.

In this regard, there are two other artists about whom I have written for Visual Art Source (in my essays on abstraction) who deserve mention for making art that (whether it was their intention or not) can generate cosmic consciousness in viewers. This duo, who today maintain a continuing posthumous presence in the city of Houston, are Barnett Newman and Mark Rothko. Paintings by both artists can be found in the collections of the Museum of Fine Arts Houston (where a new Rothko retrospective is currently on view) and The Menil Collection. Nearby legacy monuments are the Rothko Chapel and Newman's outdoor sculpture "Broken Obelisk."

In reading a recent interview between David Ebony and the curators of The Menil's exhibition, "Barnett Newman: The Late Years, 1965-70,"  I was struck by co-curator Michelle White's comment that "Newman's significance has to do with the temporal dimension of his art. Newman stresses the importance of actually standing in front of a painting." Forty years ago, when I was a student and teaching assistant for Michael Fried at Harvard, I recall Fried — who at the time was viewed as Clement Greenberg's chief disciple critic — repeating over and over again, in reference to painters like Morris Louis and Kenneth Noland (who, like Newman, have been labeled Colorfield painters), "You have to spend time in front of these paintings.” With the art history program housed in Harvard's Fogg Art Museum, I had the opportunity to put this advice to test. And while I did enjoy the Louis and Noland paintings in the courtyard, my experiences were often antithetical to what Fried sought to emphasize, which was a work's physical properties over a viewer's response to them. For me, there was always something emotional to be found in the movements of Louis' poured paint, or in the rich saturation of Noland's.

One of the first paintings I encountered upon entering graduate school was a small Rothko. I don't believe I had ever seen an actual Rothko before, and my first experience was both temporal and transcendent. In empathizing with what I was looking at, I felt something emotional come over me gradually, and as the process went on, I felt somehow uplifted. As I learned more about Rothko, I began to understand how the optical effects of transparent layers of color could yield visceral sensations that are tied to emotions. As time went on, I became intrigued by the fact that Rothko and Newman, like myself, were secular Jews. Thus I have always equated the light in Rothko's paintings with the eternal light that burns above the pulpit in a synagogue.

Maybe it's because I'm both an art historian and a curator that I have paid attention to titles. And so it was that I began thinking about some of Newman's early titles, such as "Abraham," "Covenant," and especially "Onement." Although Newman never discussed his work in terms of spirituality, preferring instead to profess a desire to evoke "the sublime," one cannot ignore the Biblical references in his titles, which borrow terminology from the Old Testament as well as the New, as in his later "Stations of the Cross." With his 1948 painting “Onement," often considered a breakthrough moment in his development, Newman immersed one of his signature zip configurations within a field of color, such that an optical pulsation occurs in the interaction between the zip and field. To achieve such an effect, the zip is painted with jagged edges and areas of transparency, allowing the darker color of the field to remain partly visible. The field itself, while monochromatic, is rendered with subtle variations in tone, such that a feeling of flux emerges the longer we look at it. Engaging with the zip, then, is like being witness to a lightning bolt, only it is a constant slow energy that emerges. Because the zip echoes the standing position of the person viewing it, the image can also heighten our self awareness. In so doing, it functions as a conduit that connects us to the painting and, as we absorb its energy, to the sublime sensation of feeling at one with the universe.