My Only Advice
Editors’ Roundtable
Column by DeWitt Cheng 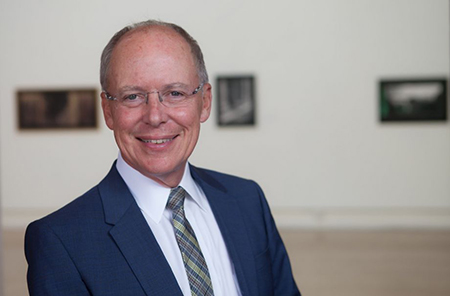 Charles Desmarais is leaving his leadership post at the San Francisco Art Institute to become the art critic of The San Francisco Chronicle in November. Photo: SlavaBlazer Photography

Back in May, the art critic for The San Francisco Chronicle for over three decades, Kenneth Baker, announced his retirement. By any standard, that is a long record as a cultural commentator, and it’s one that he has discharged capably and honorably. Everyone in the San Francisco art world probably has had quibbles or criticisms, naturally, but we owe Baker a huge debt, so hail and farewell! Recently the newspaper announced his successor, Charles Desmarais, 66, currently president of the San Francisco Art Institute, who will step down from that role before his column debuts in November. He’s not someone that most artsters would have thought of for the post, since he is known as an institutional leader not an art critic. Hopefully the paper is making the right call and his tenure will be equally distinguished.

There are some new factors in this transition, however. The San Francisco art world is in a rather perilous state these days, with high rents driving artists from the area, and galleries closing — even established top-tier galleries like Stephen Wirtz and Braunstein Quay — or converting to lower-profile, semi-private consultancies. The old art mecca at 49 Geary is on the way out, replaced, with a few exceptions, by high-rent tech firms. While new galleries have sprung up and our local museums appear healthy, there’s uncertainty in the air. The market component of the art field has never a powerful force in San Francisco culture, at least compared to what it might be given our copious quantities of art talent and the often vast disposable income of potential collectors. Given this situation, I’d like to offer some unsolicited advice to Mr. Desmarais.

Get out of town. Occasionally. While there are many good art writers working in print and online these days, the Chronicle perch, even in the digital age, is uniquely prestigious and influential. The Chron’s art critic becomes de-facto president of the local art world, so I hope that you seize the opportunity to contribute to the quality of the art discourse as it affects the local art scene. There is plenty of good work to be found not only in San Francisco proper, but also in the North, South and East Bays. Let’s have more coverage of the peripheral areas’ galleries and museums (including university venues, of course), and not just of the major local institutions that seem too often to prioritize cultural tourism over the creative community at home.

Serve the people. Too much of the art world is insular and status-oriented. Art is a curious field in that way, ostensibly embracing wild creative individualism yet bowing to fashion’s socialized conformity on the other. There are many, many respectable, accomplished artists among the 99% who are not art stars. One person in a key position can make a difference. Get out on the hustings and be as accessible as you possibly can. The artists will welcome your support, and will, in my opinion, reward the Chronicle accordingly. (Most will behave themselves.) Good ethics = good business.

Grow the brand. America lacks the cultural appreciation gene, so there’s work to be done here. Can the Chronicle support expanded art coverage with more reviews, maybe add a blog that could expand without the financial constraints of ink and paper? How about a KQED art interview show on the Charlie Rose model, or a regular round-table discussion, on the model of KQED’s own program of the late 60s, Newsroom? This is the kind of outreach that would galvanize and unite the art community.

Respect the readership. Contemporary art has become arcane, a field for specialists, so many people (even myself at times) have come to see it as nothing more than competitive display and entertainment for the idle rich. People continue to attend museums, but without much involvement. As one cultural critic predicted years ago, art has lost much of the cultural primacy that it once had and has degenerated into a casual pursuit like shopping (Arts & Entertainment — QED). Those of us who take the creative enterprise seriously, who studied art history before the noxious advent of theory (I’m editorializing again!), cannot help but feel that we may be the last generation of serious art viewers — a fear confirmed repeatedly by the prevalence of bad art programming reflective of a condescending, infantilizing ’fun’ mentality. Let’s restore some importance to art as an intellectual, emotional, visual/visceral endeavor. I was recently told by another newspaper, shockingly, that my use of the word ‘inaugurate’ was ‘academic,’ and that ‘start’ was preferable. We need to provide adult-level context and commentary without preaching or condescension, or, on the other hand, insider jargon; it is crucial to expanding the audience, and will not be done by the marketers.

Have fun. Too much of the art world is driven by status and money. Let’s stop being quite so mercantile and careerist; it’s still San Francisco, so let’s let our freak flags fly.

Thanks for your attention, and good luck on your excellent adventure!