The Broad, the Veil, the Scorching Sun
Editors’ Roundtable
Column by Richard Speer 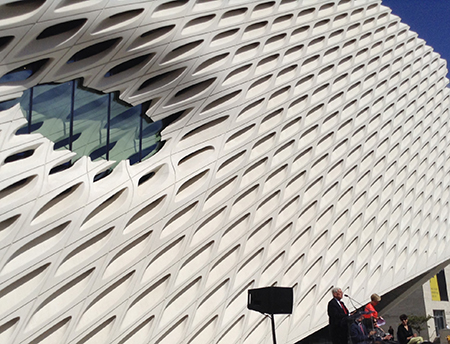 Our epoch of global warming has induced increasingly flagrant practical and aesthetic strategies to reckon with climbing temperatures. Our scorching sun is becoming less benevolent and more sinister with every record temperature-breaking summer. On a recent trip to Scottsdale, Arizona, I saw nightclubs with outdoor decks and swimming-pool patios ringed with high-tech misters spraying revelers with cooling water, even as air-conditioning vents blasted welcoming bursts of freon onto patrons as they exited the Sonoran Desert outside and entered the hedonistic paradise within. Oblivious to the realities of time and place (for it was more than 100 degrees at 11 o’clock on an August night), the partiers danced to thumping techno beats under shimmering laser-light, the very pictures of late-period decadence, chlorofluorocarbons be damned. This is the ironic new paradigm: technology deployed to shield us from technology’s metastasis gone wrong. And so this has become the architectural leitmotif of the coming age: the sun-shield, the smart shade structure, the parasol and carport writ large.

About 382 miles west of Scottsdale — about as far west as you can travel without swimming — is the newly opened Broad Museum in Los Angeles.  The Broad’s concrete-and-fiberglass exterior looks like, and essentially is, a second skin to protect artwork from a raging, roasting, canvas-bleaching sun. The museum is a hermetic fortress designed not so much to keep the artwork safe inside, as it is to keep the sunshine out. When I attended The Broad’s official opening on September 20, it was 103 degrees outside. The facility’s air conditioning simply couldn’t keep up. Wandering through rooms of Ruscha, Hirst, and other canonical masters (and the occasional mistress), museum-goers fanned themselves with hats, hands, and brochures.

The building’s architects, Diller Scofidio + Renfro, have designed the structure around what they call “the veil,” a porous superstructure that gently filters outside light, shielding artwork from the sun’s fading effects. Like Frank Gehry’s Disney Concert Hall next door, The Broad’s exterior is not organic to its innards. It is a veneer, a wafer, a cladding. If Louis Sullivan, Frank Lloyd Wright and E. Fay Jones were still alive, no doubt they would rail against such forms for not following function. The Broad’s “veil" is not structurally necessary, nor is it primarily decorative, although certainly it makes for an elegant assortment of lines. No, above all it is an environmental statement, architecture as a harbinger of ozone depletion and a signifier of the sun’s role change from giver of life to force of apocalypse.

It is apropos that in a building designed around the phenomenon of light both as illumination and a signifier of impending immolation that The Broad’s exterior penetrates its interior in such a conspicuous and decadent fashion. To this end, whose artwork could be more appropriately wanton than that of the artist so conspicuously associated with Eli and Edythe Broad, Jeff Koons? There are half-a-dozen Koons works in collection director Joanne Heyler’s inaugural exhibition, including “Tulips” (1995-2004), which stretches out luxuriantly across the museum’s physical and spiritual heart, an agora-like space on the third floor. In the über-polished, candy-colored “Tulips” and other highly reflective Koons pièces de résistance such as “Balloon Dog (Blue)” (1994-2000) and “Rabbit” (1986), the reflected contours of “the veil” overhead and on the side cover the sculptures’ stainless steel with an ever-changing web of lines, a matrix that morphs and warps as you move around each piece, like a space-time diagram of a black hole. In interviews, Koons often relates how viewers delight in seeing themselves in his mirror-like surfaces. He leaves it to us to conclude that the works pluperfectly reinforce our unrepentantly narcissistic climate of social media and reality TV.

That Koons receives so much prime real estate in The Broad is only fitting, given L.A.’s look-at-me celebrity obsession and Southern California’s longstanding car and beach cultures — except that now, the cars and beaches so lauded by The Beach Boys, troubadours of those cultures’ 1960s heyday, have gone from utopic to dystopic in a single causal line, as automotive emissions have turned the sun from friend to enemy. Koons’ cheerily child-like works celebrate this transmogrification. This latter-day Hagia Sophia exalts in surfaces, sheen, glitz, and gilded grandeur. Beneath the searing orb that their architects have so pointedly and fetishistically deflected, Eli and Edythe and Jeff have sung a song to a brave new millennium that is no longer new, with lyrics drawn from the closing lines of Andrew Marvell’s “To His Coy Mistress”: “Though we cannot make our sun stand still, yet we will make him run."