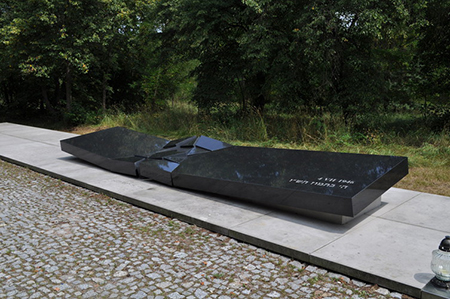 A combination of organized tour and self-driven search led me to visit nearly a dozen Polish Holocaust memorials last month, firmly answering “yes” to the question recently put in a headline by The Times of Israel, “Has Poland become a model of Holocaust memorials?” In our brief discussion of six of them, my observations become more artistic than historical or political. But in such cases, it can be nearly impossible to separate these dimensions.

Despite the iron-clad clamp-down on modern art after World War II in Poland under the subsequent Soviet-approved puppet governments, it may be surprising that simple abstraction played so many roles. Leon Marek Suzin’s first shrine of them all, the 1946 “Warsaw Ghetto Uprising Memorial,” is a small granite-and-bronze circular depression in the ground with appropriate inscriptions. Soon considered inadequate in commemorating such a singular act of futile resistance, Suzin oversaw and collaborated with sculptor Nathan Rapoport, whose nearby, and larger, “Monument to the 1944 Warsaw Uprising” (1948) became the standard acceptable form of remembrance. Socialist Realist figures of identifiable and anonymous individuals are in square cameos on each flat side, three-quarter-relief carvings that are remarkably animated. Both memorials face Polin, the Museum of the History of Polish Jews which opened last year in a new building designed by Finnish architects Lahdelma & Mahlamäki.

At the other end of the park containing the museum and the 1940s memorials, across the street, is the 1988 “Umschlagplatz (Collection Point) Monument,” a more effective collaboration between architect Hanna Szmalenberg and sculptor Władysław Klamerus. With an opening the width of a boxcar door, the visitor enters tall corridors of white marble etched with the 400 most common Jewish first names.

This is also something worth remembering at the “Monument to the 1944 Warsaw Uprising,” (1989), a giant last gasp of Socialist Realism, the perfect frontispiece for an equally monstrous Stalinist government office building in Warsaw. Jacek Budýn’s multiple, over-scale resistance fighters are climbing into the sewer on one side of the square and emerging doubled in size on the other.

Stalin’s death in 1953 meant a temporary thaw in Poland’s long Cold War winter and also led to real Holocaust memorials. In 1957, the Auschwitz International Monument Commission competition got underway with Henry Moore as committee chair. Plans for turning the former concentration camps into state-run educational museums fed into a Communist commitment to blame everything on Nazism and Fascism whenever possible, even if it finally meant acknowledging that Polish Jewish civilians were unusually afflicted by such policies as the Final Solution. Russian crimes naturally went unmentioned for 50 years.

After two years, out of 426 entries, Moore and his colleagues were discouraged, but eventually narrowed the field to Julio Lafuente of Italy and Oskar Hansen of Poland, with sculptor Jan Zachwatowicz overseeing them as chair of yet another committee. After much to-ing and fro-ing about size, scale, tablets, inscriptions, languages, types of materials and proximity to the last remaining, unreconstructed crematory oven at Auschwitz-Birkenau, the “International Monument to the Victims of Fascism” was dedicated in 1967, fully acquired by the State Museum in Oswiecim. Huge, black, and ugly beyond belief, it competes successfully with the ghastly slag heap crematory pit nearby which no earthwork could ever equal in understated, volcanic meaning. In a last minute switch, carved-relief victim figures were replaced by a tall black vertical shaft symbolizing the oven chimney and centered with a single triangle to represent all of the casualties. This act re-entered the work into an historical chain of modernist abstraction in the 20th century, cleansing it of the dogmatic propaganda required of other memorials during the Communist period.

As if the 1.3 million Jews killed at Birkenau were not enough, 39 survivors returning to their homes in Kielce along with three non-Jews were ambushed and murdered by a remnant of the Polish Nazi paramilitary squads on July 4, 1946. Kielce native and pogrom survivor Marek Cecula lived in a Soho loft in New York City for 20 years during which he ran the design department at Parsons College. Returning to his hometown after 1989, he determined to create a pogrom memorial for the biggest and most decisive act of genocide so soon after the war. Inside the city’s Jewish cemetery, “Kielce 4 July 1946 Memorial” (2010) rests. Low to the ground, polished slabs of black granite stretch out 30 by 5 feet toward the nearby grove of trees. With the date inscribed on one corner and a craggy stone from Israel implanted into another, the smooth continuity of flat stones is shattered midway by a deeply etched Star of David. Aesthetically more closely related to Michael Heizer or Carl Andre than to Suzin or Rapaport, Cecula’s work belongs in the quiet company of fellow Poles Szmalenberg and Klamerus, the “Umschlagplatz” artists.