Still Nothing Like Venice
Editors’ Roundtable
Column by James Yood 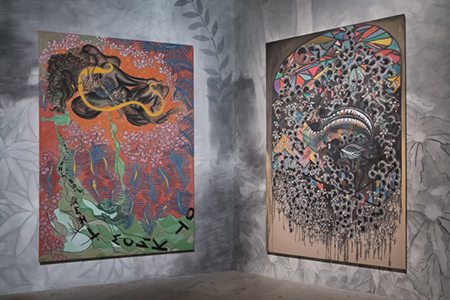 Chris Ofili, installation at The Arsenale at the Venice Bienniale, 2015

Reader, once again, please forgive me; I know much of this will sound like the grousing of a pampered prima donna (you know, “and they dared to try to serve me the pinot grigio improperly chilled!”), but for those of you who have never experienced the Venice Biennale (and please do so, at least once in your life) it’s worth thinking about the fact that, in our time, the premier festival of contemporary art held anywhere on this planet is held in the place most cumbersome for this endeavor. A little over two years ago I wrote a column for VAS that began “By the time you read this, I’ll be on my way to Venice, Italy.” A group of colleagues and I took a group of SAIC undergraduate and graduate students to Rome, Milan, and Venice, concluding with six days at the Venice Biennale. I’ve made this trip for the last four Biennales, and just returned to Chicago a week ago from this year’s journey. (The jet lag gets worse as you get older, I spent the first three days back engaged in seemingly endless conversations with Batman, interspersed with repeated intense dreams about leading a group of bored students through a Venetian palazzo with a zillion rooms housing the exhibition “The Soporific Nature of Contemporary Art:  Part XXVI.”)

I know I’m lucky, it’s a great privilege to travel like this, see wonderful places with colleagues I admire and students I get particularly close to. It’s so much more textured to spend 12-14 hours with students every day for almost three weeks rather than just seeing them sitting at desks in a classroom a few hours at a time. Italy becomes the classroom. We walk, we talk, somebody’s cranky, somebody’s particularly funny, somebody’s sick, etc., the course becomes an interpersonal group narrative in a way it cannot in a lecture class.

And it concludes in Venice. We do some scanning of contemporary art in Rome, visiting the Gagosian Gallery there, Zaha Hadid’s MAXII and this year we included a visit to the American Academy. In Milan we concentrate on contemporary design, visiting the Alessi factory in the mountains north of the city, the recently opened Fondazione Prada (a must see if you’re ever in Milan), and some designer’s studios. But it’s fair to say that the greatest intensity of our encounter with contemporary art comes in Venice.

All great cities take a toll on their visitors, but none as completely as Venice. Getting from here to there, from point A to point B, can be truly monumental and complex, an epic journey, and when you try to do that many times a day you’re worn out by the process, all of which gets heightened by the summer crowds and heat. You walk or you’re on a boat, there are no cabs, cars, buses, subways. If you walk, you walk up and down (ascending and descending bridges over innumerable canals often leads me to climb the equivalent of a 50-storey building each day there.), if you get around by boat you’re usually at the mercy of the vaporetto system, a system that knows no mercy. It can take an hour or more to get somewhere you can literally see across a lagoon.

Don’t get me wrong, I love Venice, I love it as I do no other city on the planet. I’ve been visiting Venice for a long time and lived there once for about six months. Every place is unique, but some places are more unique than others, and Venice is the most unique of all, and I would visit it repeatedly if it never hosted a Biennale at all. It really can live up to its nickname, La Serenissima, the most serene, a site of breathtaking and heartrending beauty and grace, the city of Titian, Veronese, Tintoretto, and Bellini, a place where time seems to stop and the signature sound is that of water lapping against the marble steps of a palazzo that it has lapped against for hundreds of years. It’s a city (only barely a city; its population is usually cited as under 100,000, but it's visited by around 22 million tourists a year) that makes no sense until you are there, and then every other place seems to make no sense.

But grafting upon it the cacophonous circus of an enormous exhibition of contemporary art spread from one end of the city to the other makes a sow’s ear out of a silk purse. It’s as if the organizers set this out as to be as impossible a project as they possibly could. The lead curator this year, Okwui Enwezor, included 140 artists in “All the World’s Futures,” split the exhibition between two locations, and placed works at offsites in dozens of locations scattered all over the city. Anyone who tells you they saw everything in the Biennale is a liar, every pavilion and booth, every offsite and collateral event, even if all this is ostensibly viewable until November 22 there’s not enough time (and a good number of the offsites were already closed by early July). You haven’t lived until you’ve traipsed from one end of Venice to the other, following a well thumbed map and some truly useless signage, to see the Azerbaijan Pavilion (which might be a walk up to a two room apartment on the third floor of an abandoned building) — only to find it closed.

But the more I think about it, the better the juxtaposition of a pig’s ear and a silk purse begins to sound. Maybe that and Venice are good metaphors for how contemporary art functions anyway. The very absurdity of the Venice Biennale symbolizes our aesthetic moment: the diffuse nature of it, the endless chase after itself that it demands, its visual glut and pilgrimage nature, its unceasing frustrations and, yes, those occasional moments of the sublime. OK, I’ll come across with just one of those moments from this year, Hiroshi Sugimoto’s tea pavilion on San Giorgio Maggiore, actually not part of the official Biennale, but a significant collateral event, was an oasis on an oasis. Two more, Kerry James Marshall’s new abstract paintings, and Chris Ofili’s new work. It’s the phenomenon of the Biennale itself, rather than what’s in it, that is important; really, it hurts so good.