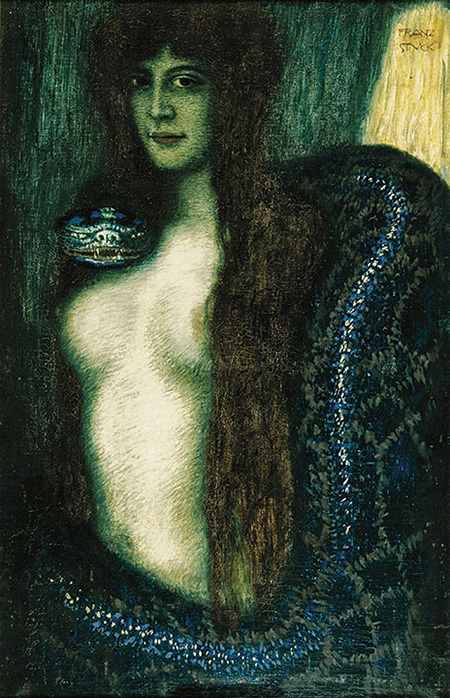 The Frye Art Museum in Seattle is a lot like the Kimbell Art Museum in Fort Worth, Texas: housed in an exquisite palace of modern architecture; endowed to the teeth with cattle-ranching money; filled with 19th-century paintings and, in the case of the Frye, perpetually free to the public. The differences are notable, too. The Kimbell highlights Gothic, Renaissance and Impressionist masterpieces while the Frye is tilted toward northern European and Scandinavian realism of the 19th and early 20th centuries. The Kimbell focuses exclusively on the art of the past while, under current director Jo-Anne Birnie Danzker, the Frye has committed itself to an aggressive contemporary art agenda. If the Kimbell is world-class and the Frye comparatively unknown, it has much to do with our dismissing of, until recently, most of the fusty, not to say musty, artists and subjects enshrined in the new re-hanging of the founding collection, “Frye Salon.”

Charles and Emma Frye benefited from Mr. Frye’s extraordinary business acumen and foresight. He made several fortunes, literally bringing home the bacon to Seattle with his chain of butcher shops, warehouses, cattle pens and wholesale meat supply companies. Drawing on their shared German-American heritages, the Midwest-born couple favored landscapes (Barbizon, not Impressionist), livestock (sheep, cattle, horses, and even ducklings) and portraiture (faded opera stars and imaginary composer scenes, among many others). With the large collection homeless after their deaths, another decade passed before the first incarnation of the Frye Art Museum opened on February 8, 1952. Run with an iron hand by the Fryes’ attorney’s widow, Ida Kay Greathouse subsequently made annual jaunts to New York to acquire American art that meshed with the founding collection.

Birnie Danzker has hung 40 of the original 300 works on four surrounding walls of the big east gallery. With not one intruding label except for a helpful hand-out key, visitors (there are at least 60,000 per year) can experience the Seattle version of not just the modernist grandeur of the Kimbell’s architecture, but also of the older institutions such as the Isabella Stewart Gardner Museum in Boston and the Barnes Collection in Philadelphia: classy and cozy.

Since very few names will be recognized by the average museum goer, it’s worth mentioning a few treasures and favorites to learn why they were once ridiculed but now seem more important than ever.

Could one say the Frye was 50 years ahead of its time? With the long shadow of modernist abstraction (something Mrs. Greathouse despised) on the last century, the Frye was not taken seriously for years by the city’s art elite. As Abstract Expressionist collector Virginia Wright once put it, “We thought it was a joke, though now it seems quite different.” The paintings by erstwhile German, Austrian and Scandinavian luminaries have not changed, but modernism has fallen from its perch. A century of European and North American art history and scholarship now tell us more about Lenbach, Leibl, Max, von Stuck and Dahl. Under Danzker’s tutelage, resident artists, curators and conservators have researched the collection in ways never imagined by the conservative, childless couple from Iowa.

For example, “The Condemned” (1869-72), a seated prisoner and uniformed guard by Hungary’s greatest painter, Mihály Munkácsy, was only identified recently as a study for the larger masterpiece of the same name hanging in the National Gallery in Budapest. Throughout the Cold War, when seen in Seattle, it symbolized Soviet occupation of the country and was a stringent reminder of the hundreds of imprisoned, tortured and executed citizens during the unsuccessful revolution of 1956.

Another inadvertent symbol of central European conflict, Adolf Schreyer’s “The Burning Stable” (c. 1850) is a scene of tremendous power and danger. Horses are escaping the flames of a stable situated, according to the artist, in Bosnia Herzegovina, the former Yugoslavia. During the Yugoslav Wars of the 1990s this picture took on greater urgency. Until President Clinton and NATO forces intervened, it was a bloodbath that killed thousands.

Franz von Stuck’s “Sin” (c. 1908), perennially popular with Goth teenagers and college students, depicts a slimy Eve with a coiling python worn around her shoulders as a shawl. One of seven versions done (the most famous hangs in Berlin), its creepy gaze will never date or fade. We know now that the 19-year-old Edvard Munch, visiting from that backwater, Norway, never forgot it and one can easily see where that led.

One can tire of the endless sheep and goats, cows and oxen, but these are mitigated by other holdings that are either seen anew due to increased scholarship or have become timelier because the world has changed. This is how artists of the past have their reputations reassessed and rehabilitated. “Frye Salon” is a good place to start.