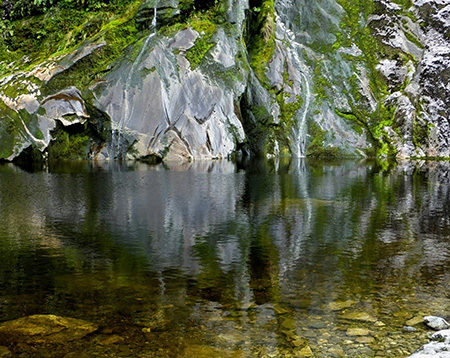 I believe we carry archetypes of color around with us inside our imaginations.  Our notions of, say, what a fire-engine red looks like, or a sunflower yellow, or the pluperfect cobalt blue, are highly autobiographical and, as Josef Albers exhaustively demonstrated, contextual. We call these notions forward from the wellspring of memory, and suddenly a kindergarten-and-Crayola rainbow arcs across the mind’s eye. Often, these Proustian reveries of chroma are linked to our experience of place. Anyone who has rowed through Capri’s fabled Blue Grotto or climbed the ridges above Lake Louise, Canada or Crater Lake, Oregon, inevitably associate those places with particular shades of blue. These are the sorts of places artists, poets and even simple art critics pull up in the screens behind our eyes while searching for just the right pigments or words to concretize and externalize our internal experience of color.

The relationship between color and place was prominent among my thoughts during the course of a five-week stay in New Zealand, from which I’ve recently returned. The water there, between the South Pacific Ocean and the Tasman Sea, was so preternaturally clear and chromatically responsive to everything above and below it, it offered a reservoir of color archetypes that has already begun to seep into my sensibility. On New Zealand’s North Island, just below Red Crater on Mt. Tongariro, lies a cluster of three pools called the Emerald Lakes. Filled with dissolved volcanic minerals, the pools appear to glow with an alarming, radioactive-looking green. Despite their names, the lakes aren’t so much emerald green as they are Himalayan turquoise, rimmed in creamy ochre, looking for all the world like the vaguely sickly froth that floats in lime-sherbet punch.

In the rivers and creeks of New Zealand’s South Island, a leitmotif began to emerge: the phenomenon of pellucidity. Along the fabled Milford Track, a 33-mile hiking trail outside Queenstown, the streams are so clean, guides encourage hikers to drink from them freely without boiling or filtration. (By contrast, even in the fairytale-waterfall paradise of the Columbia River Gorge near my home in Oregon, hikers are warned not to even let dogs drink from streams due to giardia contamination.) When water as uncommonly pure as New Zealand’s sluices through gullies lined with dead leaves, it appears simultaneously brown and clear; when it flows over blue pebbles in the Clinton River, it looks like liquid aquamarine; and on a sunny day along that same river, brown trout and eels swimming upstream seem not to be swimming through water, but floating through air. The eyes marvel and rebel at the optical illusion of water so deeply saturated yet also transparent; the mind doubles back on itself as pellucidity and opacity wrestle and blur.

During the five days of that hike, the remarkable clarity of streams and lakes brought to mind the achingly lyrical first stanza of Paul Laurence Dunbar’s “Sympathy”: “I know what the caged bird feels, alas! / When the sun is bright on the upland slopes; / When the wind stirs soft through the springing grass, / And the river flows like a stream of glass ...”  When I returned to Oregon, that stream of glass was still flowing through my synapses, I found myself awash in wonderment at the intercourse of light, color and all things limpid and pristine.