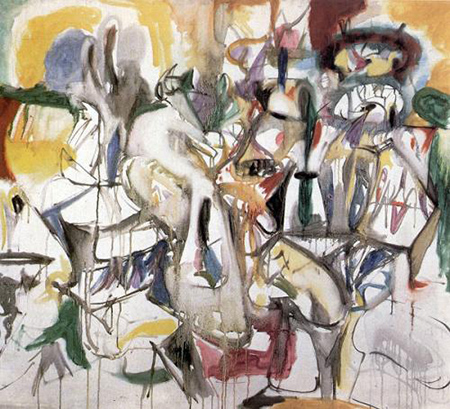 Eleven paintings and one sculpture from the Seattle Art Museum permanent collection offer a great introduction to midcentury American art, an area in which SAM is particularly strong. Be forewarned: there is only one recognizable masterpiece from among the marquee names Arshile Gorky, Jackson Pollock and Hans Hofmann, but the examples that are on view are important because they reveal overlooked pockets, may be atypical, or are there because of the advice and influence of one of the past century’s most important art critics, Clement Greenberg (1909-1994).

The Portland Art Museum houses Greenberg's entire collection, considered the writer most closely associated with Abstract Expressionism and its successor, Color Field. The New Yorker paid many visits to Seattle to see his friends Bagley and Virginia Wright [the subject of Kangas’ most recent columns—Ed.], some of whose donations are included here.

To begin with, “How My Mother’s Embroidered Apron Unfolds in My Life” (1944) by Gorky (1904-1948) is the masterpiece in question. Delicately colored, watery drips of color flow over sketchy outlines of plant forms and blossoms, abstracted decoration for a peasant outfit. It has been reproduced many times and borrowed for all the big Gorky retrospectives. In an era of social and political art, many hold that abstract art is incapable of content. However, Gorky and his mother were victims of the Armenian genocide of 1916. After they were hounded out of the Ottoman Empire, they fled to Armenia where the artist’s mother died of starvation in his arms. He was 15. After coming to the U.S. as a refugee and re-inventing (and renaming) himself, his art could not completely leave behind the Turkish atrocities. Thus, the painting contains another reading: dripping blood; body parts; and the aftermath of gruesome butchery. The white background might be his mother’s apron; it is also a bloody butcher’s apron. Haunted by the genocide, Gorky hung himself four years later at his farm in Virginia.

Pollock (1912-1956) was 35 when he made “Sea Change” (1947), acquired for SAM by Seattle’s first modern art dealer, Zoe Dusanne, who talked Pollock’s New York dealer, the legendary Peggy Guggenheim, into gifting it to SAM in 1958. Comparatively small (5 by 4 feet) relative to his classic Abstract Expressionist work, “Sea Change” was painted the year his drip-and-spatter technique began. This alone makes it a terribly important painting. With its vague references to marine life, it also contains an image, of which his mentor, Greenberg, could not have approved. Distinguished critic Donald B. Kuspit swears he sees a head resting in the middle third of the picture, thus predating the figurative direction Pollock’s art was returning to when his fatal car crash occurred.

Hofmann (1880-1966), represented by two works, came to the U.S. in 1932 and is considered the father-figure of Abstract Expressionism. He was deeply admired by Greenberg for his art, his teaching and writings on what he called “push-pull” theory, the art of color juxtapositions. “Circular Fantasy” (1949) is thickly painted, displaying what Greenberg called Hofmann’s surface “facture.” By 1963, when “Elysium II” was painted, both Hofmann and Greenberg had turned away from Picasso in favor of the brighter color and flat solid areas of Matisse. Five feet high, stacked blocks of orange, blue, yellow and green hover around a red square. Harmony of color and composition are in perfect accord.

The tendency of painting to compete with sculpture in terms of size was accentuated by a painter who quickly became a sculptor, Frank Stella (now 78). Profoundly interrogating painting’s relation to drawing and canvas shape, “Wolfeboro III” (1966) has a pedigree of mechanistic, industrial-looking Russian Constructivism rather than Greenberg’s sacred cubism. Also upsetting the avant-garde apple cart at the time, fluorescent alkyd paint shades of orange, red and blue trace the outlines of the seven-sided polygon. At over 13 feet high, it looks enormous in the second-floor, two-story high gallery. On the same wall is Stella’s “Sabra II” (1967) from the “Protractor” series. Overlapping curved geometric shapes freeze a falling motion with unusual color combinations such as sage, brown, melon, teal and blue, referencing in his own way Matisse’s penchant for pure, undiluted hues.

The persistence of Greenberg’s championing of Matisse strongly influenced Kenneth Noland (1924-2010), Helen Frankenthaler (1928-2011) and Ellsworth Kelly, now 91. Their paintings here extend the use of solid areas of clear color and crisp outlined shapes.

Besides Gorky’s suicide and Pollock’s crash, one other tragic loss is on view. Dead of suicide at age 44 in 1987, Christopher Wilmarth’s first museum show was in Seattle in 1979. “Leavers and Dreamers” (1987) is a tour-de-force of interlocking geometric steel planes and acid-washed glass plates. Mysterious and beautiful yet elegant and substantial, “Leavers and Dreamers” was made by a “leaver” for all of us who remain to appreciate Wilmarth's art, the “dreamers” of modern painting and sculpture.