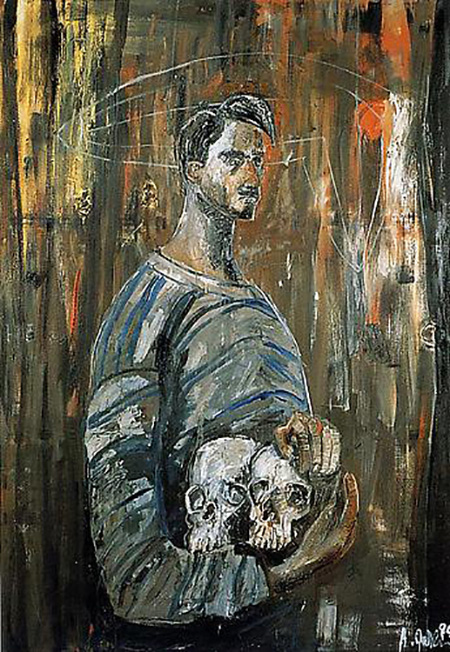 It’s fun to be an extremely tangential participant in an art world controversy, in one of those things where everybody takes a side and passionately argues for it.  Here’s the situation — as I write this, it’s April 22, 2015; on May 11 I’ll be sitting on the stage of the Chicago Auditorium Theater attending the graduation ceremonies capping the academic year at the School of the Art Institute of Chicago (I direct a graduate program there in New Arts Journalism). About two rows in front of me, facing the hundreds of graduating students and their families, will sit a group of SAIC administrators, Deans, et al, and the five individuals who will receive honorary doctorates during that ceremony. They are to include German artist Albert Oehlen, Janet Byrne Neiman (widow of LeRoy Neiman and a SAIC alum), President/Director of the Art Institute of Chicago Douglas Druick, distinguished gallery owner Rhona Hoffman and Kanye West.

That’s already an indication of how this plays out — despite you, dear reader, being an interested observer of the contemporary art scene (or you’d be doing something now other than perusing Visual Art Source) it is probably necessary to identify the first four of the SAIC’s honorees this year. You can be an avid consumer of contemporary art and have little or no idea who Oehlen, Druick, Neiman and Hoffman are. Even if you are familiar with one or more, you certainly wouldn’t recognize them on the street. But you would have to be living under a fairly airtight rock somewhere to have no idea who Kanye West is.

And, as I’ve discovered, if you weren’t under that rock you’d have a pretty strong opinion of him, favorable or not. Even before the announcement of this roster of honorees was official, word leaked out about West’s honorary doctorate. Almost immediately there was surprise and pushback from a number of sources; some SAIC alums took to Facebook and other social media platforms, and others with no connection to the School shared their largely negative initial opinions of the move.

The arguments against conferring this degree on West shared a few themes:  he’s not a visual artist; he’s kind of crude and rude; he insulted Taylor Swift and (in some ways worse) Beck; he married a Kardashian; he’s a misogynist; he’s the inventor of what will someday be known as ‘pulling a Kanye’ (the impolite imposition of yourself into someone else’s moment; within celebrity culture, hijacking a public event to get maximum exposure for yourself); he hasn’t accomplished enough to deserve this honor; he doesn’t have anything to do with the SAIC and its programming, etc. Other voices were then raised in his defense: he’s from Chicago; he attended art school briefly before turning to music; he’s a major force in contemporary culture; he recently wistfully observed that if he had the time he would go back to art school at the SAIC; it will be fun to have him there; he’s someone the graduating class will remember in thirty years (unlike, perhaps, Albert Oehlen); we’re an art school and should do something out of the box; provocation makes you think; and thinking and being challenged is a good thing. This definitely won’t be like your grandparents graduation.

In these succeeding weeks leading up to graduation every time the topic of West’s honorary degree comes up people are engaged. You can feel pulses starting to race and people assuming forceful positions — on the one hand, this is the end of human civilization as we know it (you know, as we once believed of Abstract Expressionism, Cubism, Pop, Surrealism, etc.). On the other hand, this is an opportunity to have that long standing High Art/Popular Culture conversation that is still so needed in art education today, to raise the roof a little bit. West won’t give the commencement address, which will be delivered by Oehlen, though there’s a rumor that West might briefly perform, as Patti Smith did a few years ago when she received her honorary doctorate from the SAIC. I remember that moment, when she stood on stage with a guitar and sang a song or two, the audience seemed to enjoy it, but there was a contingent too who also cringed, who felt this was the wrong thing at the wrong place at the wrong time. SAIC President Walter Massey and Dean of Faculty Lisa Wainwright provided the context for the decision to honor West in a recent interview.  While I wouldn’t describe myself as a good company man, it’s my inclination to agree with their assessment. See what you think.

If you see any of May’s graduation on YouTube (the SAIC will have it in its entirety on its website a day or two after the 11th), TMZ or whatever, you’ll get a chance to see what West does. I certainly anticipate his doing something memorable, he’s one of those personalities who just isn’t going to sit there for two to three hours and shake a few hands. Look a few rows behind him, and if you catch a glimpse (by the way, in the event you don’t know it, the Chicago Auditorium Theater is one of the great interior spaces in the U.S.; Google or Bing it) of me sitting there with a sly grin on my face, it’s because moments like this are what make teaching at an art academy the absolute best job in the world.