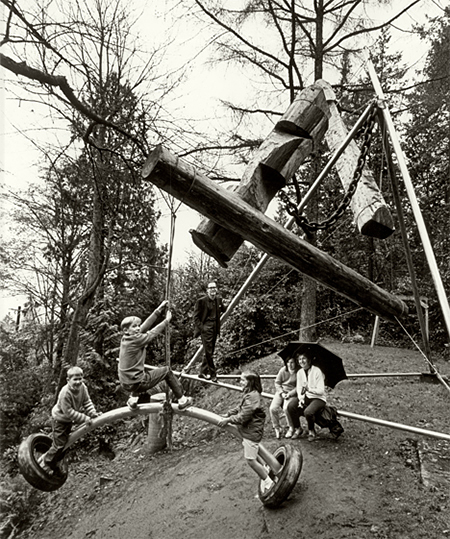 Virginia Wright continues her reminiscences about life as an art collector, educator, dealer and friend of artist Marcel Duchamp (1887-1968), dealer Richard Bellamy (1927-1998) among others. Wright, 85, recalled how, at the age of 23, she worked as an assistant for Sidney Janis Gallery in New York on the legendary “International Dada” exhibit designed by Duchamp in 1953: “Duchamp was quite a guy. He’d been very handsome but took on a spiritual look in his fifties. In '[International] Dada' there it was: ... his urinal [“Fountain,” 1918], hung over a doorway with a bit of mistletoe hanging down from that. “Well. Duchamp designed the gallery announcement and the catalogue was printed on tissue paper with a checklist and essay. My job was to crumple up all the tissue paper so that when people came to see the show, they picked up the wads of paper out of the wastepaper basket.”

By 1967, while married to Bagley Wright and raising four children in Seattle, Virginia Wright opened her own gallery, Current Editions, one of the first blue-chip print galleries on the West Coast. “Multiples, Inc., ULAE [Universal Limited Art Editions], and Gemini G.E.L. were getting going. And it seemed prints were a great way to go for Seattle. I loved doing it: installing the shows, choosing the works, even the bookkeeping!” She sold the gallery in 1973.

While attending Barnard College in art history (where her granddaughter is now a student), Wright attended the “Art Since 1900” lectures by Meyer Schapiro (1904-1996). “He made the link between the earlier art and World War II, as if Pollock and de Kooning were part of a chain of events. It was like a religious conversion.”

While Janis, Betty Parsons, Leo Castelli and Andre Emmerich were important figures in the formation of her taste, Wright singled out Bellamy for special praise. “He was a mysterious, funny, quirky guy. Music and literature also interested him, but he was hard to pin down. [Collector] Robert Scull was a huge underwriter of the Green Gallery or so the story went. I wanted an Oldenburg from Janis. I asked Dick to have a look at the show and let me know. He said ‘There’s nothing there.’ He would not push art — the opposite of dealers today. And as soon as he closed the gallery, he was very careful to put all the artists in better galleries.”

The friendship with Bellamy also led to the acquiring of, among other things, “Box with the Sound of Its Own Making” (1961) by Robert Morris. “The Box [a hollow wooden cube with a tape and functioning tape recorder inside] was in Morris’ first show at Green Gallery, but the label said NFS. Bellamy told us if we really wanted it, for $700 we could have it.” It is the single most-requested loan from Seattle Art Museum and considered an early, prophetic example of Conceptual Art.

The Contemporary Art Council, a collectors’ coalition unassociated with any one institution, was another Wright brainstorm that led to the first modern art programming for the University of Washington's Henry Art Gallery, Seattle Art Museum, Western Washington University and other regional venues.

“The CAC always had a vision to have a curator of modern art in Seattle, but Dr. Fuller [Director-founder of SAM] resisted us for a long time. Dick Lang was a friend of Jan Cowles’ and her son, Charles, was a friend of mine — and he was available.” Cowles began work in 1975, with Wright’s mother, Virginia Merrill Bloedel, underwriting the $65,000 renovation costs for turning the former Seattle World’s Fair British Pavilion (designed by Paul Thiry) into the Seattle Art Museum Modern Art Pavilion. It closed in 1987 after numerous exhibitions were organized or borrowed. Department activities were incorporated into the 1991 SAM downtown headquarters designed by architects Venturi and Scott Brown, Mrs. Wright’s choice.

“The [1976] Warhol show was totally Charlie’s idea and, of course, he got Warhol to attend, same thing with the [Richard] Avedon show. And he brought out [Jules] Olitski, too; Charlie didn’t listen to me about an Olitski show, but the Warhol show was a great success.”

Asked about her uncanny ability — as much or more so than any other mid-20th-century American art collector — to select winners and acquire crucial first works out of early shows by Pollock, de Kooning, Robert Morris, Mark di Suvero and others, Wright confessed, “I had the sense to seek advice. It was more experiential. I never really had a ‘feeling.’ Anne Gerber had that sixth sense though; she was amazing. Carl Andre? I could not figure that one out, but for her, it was, ‘why not?’”

Short of a full-scale biography or autobiography, Virginia Wright’s numerous interviews reveal a deceptively self-effacing modesty that conceals a lifetime of excitement, cultural prescience and courage.