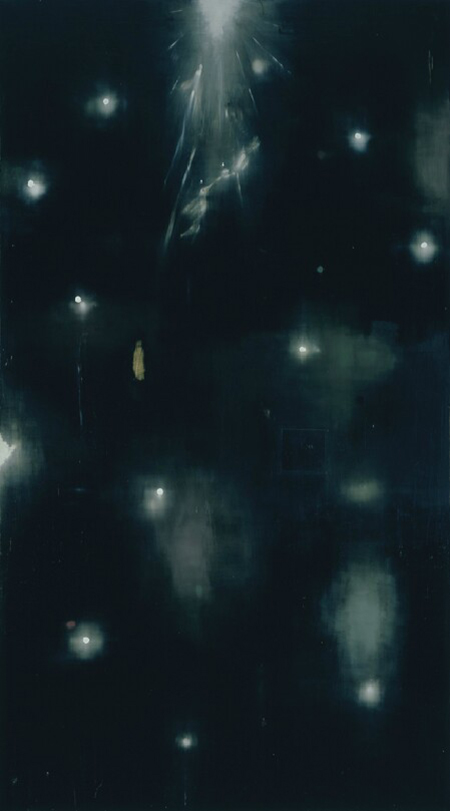 Recently, several critics — including Jerry Saltz and Christian Viveros-Fauné — have commented on the current proliferation of so-called "Zombie Abstraction," the "been-there-done-that" school of abstract painting that dominates the art fairs and tends to be vacuous in terms of form and content. Produced mostly by younger artists who attended art school and are promoted by dealers to well healed collectors, this type of painting is characterized by formulaic approaches to composition that would be familiar to anyone who is aware of the various abstract styles that were once considered innovative. Abstract expressionist brush gestures, geometric grids or planes and monochromatic color fields are the most common. While causing a bit of a stir today, such mediocrity has in fact been around for some time. I can remember visiting galleries in New York and elsewhere over the last three decades in which I was frequently dumbfounded as I wondered why anyone would exhibit abstract expressionist paintings that couldn't hold up to those of the masters. Even back then, I imagine, "potential sales" was the likely answer to my question.

Putting economic issues aside, I now ask myself several new questions: what is it that Zombie Abstraction lacks? What should younger artists be looking at if they are to arrive at a healthy antidote to the weakened state of abstract painting? And who are the abstract painters working today genuinely deserving of recognition for already offering a cure?

One need only look at 20th century art history to see what it takes to make an abstract painting come alive. Of the artists often credited with "inventing" abstraction, the one who has always been tops in my book is Franticek Kupka. Fascinated by micro/macrocosmic relationships, Kupka scrutinized what was under the microscope and in the galaxies, and translated what he saw into an abstract visual syntax. Like his peer Robert Delaunay, he was also an observer of light. In his World War I era "Vertical Planes" series, Kupka blended his impressions of church architecture and colored light penetrating through stained glass windows. Through the interplay of intersecting lines and varied bold colors, he created a dazzling chromatic energy capable of mesmerizing a viewer, whether one is aware of the content or not.

In the 50s, Mark Rothko and Barnett Newman similarly knew how to engage a viewer, but with more minimal styles. Through layers of paint saturating a canvas and central positioning of soft-edged floating rectangles, Rothko effected an emotional charge that can tap into our primal instincts, ranging from the tragic to the sublime. And Newman, through the electrifying power of the vertical zip, turned open fields of color into awe inspiring representations of an expansive and infinite universe.

In a quieter, more Zen-like vein, Robert Ryman has produced work since the 60s that can take viewers to an inner place filled with endless possibilities. One of the highlights of my long past jaunts through the New York galleries in the late 80s was going through Ryman's retrospective at the Dia Art Foundation. Each monochromatic white painting provided a unique sanctimonious experience. The differences were soft and subtle, and connecting with the work evoked sensations of peacefulness and tranquility.

Although these artists differ in styles and issues, Kupka, Rothko, Newman, and Ryman are bonded together by their ability to produce various forms of spiritual expression. Their works, in other words, are either affirming and inspirational or solemn and tragic. And whatever their temperament, they heighten one's consciousness of something larger than our physical selves.

Among boomer generation artists, one who clearly belongs in this group is Ross Bleckner, who has veered back and forth between abstraction and semi-abstraction while investigating some of the same subject matter as Kupka, including microscopic cells and star filled galaxies. Rather than being motivated by scientific inquisitiveness, however, many of these works were created in response to the devastation of the AIDS crisis. While visiting the offices of the Broad Art Foundation in the late 90s, I was treated to a viewing of Bleckner's AIDS memorial paintings of the late 80s-early 90s. Situated in a small gallery with all four walls housing works such as "Us Two" (1988), I was overtaken by the series' emotional intensity such that I sat down on the bench in the center of the gallery and found myself grieving over the loss of friends and colleagues who had been stricken by the disease. I knew at that moment that I was fully experiencing the tragic, that I was feeling the heartbreak that was a dominant aspect of the AIDS era zeitgeist.

Bleckner's paintings are the kind that have to be seen in person in order to understand and appreciate them fully. Too subtle to make complete sense in reproduction, the surfaces of Bleckner's paintings reveal traces of sensitive brush handling, with densities and textures varied such that matte and glossy are able to coexist beautifully within a single work. Add to this the faintly blurred passages of light contrasting with the open fields of deep blue, and hints of imagery associated with death and loss, and there emerges an aesthetic of true compassion.

[Part 2 of this essay will appear in May—Ed.]