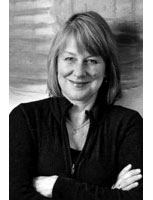 Laura Ross-Paul paints: “the wonderment of our interconnection with nature and with each other, the web of life.” Based in Portland, Oregon, she spends much time in a raw family cabin and her adjacent yurt studio in a beach town close to an old-growth forest. Amid ancient trees and sea, Ross-Paul is continually amazed how nature and human life share patterns, each fitting in and supporting the other. Her art depicts these “patterns and moods in natural settings that echo patterns and moods found in human life.” Thus, her thoughtful art reveals how nature and humans continually play off each other, both compositionally and psychologically. The mood of the sky or the bend of a cloud mimics the bend of a human back as nature takes on the posture of the other. “A splayed hand echoes a leaf; a branch goes down a stream, intent on passing some rocks to continue its journey.”

To achieve synchronicity, Ross-Paul spends a great deal of time capturing natural details and working on precise body language and facial expressions. She “sweats bullets” getting the correct body language, the exact emotion and facial expression. In one painting, Archway (2009), two boys hold ends of a flexible stick that forms a loop. In the background, a tree made out of two interconnecting trees symbolically represents the actions and relationships of the two protagonists in the foreground. The stick represents their being two within a single relationship. Working with duality in nature, humans, human pairs, and twins, Ross-Paul finds that dissimilar aspects of self forever try to become one with the whole, struggling for change and balance, but always through “wonderment.”

Through much trial and error, working with the Portland-based Gamblin Artists Colors, Ross-Paul and Martha Gamblin arrived at a technique that is unique to Ross-Paul and gives her oil paintings the vibrant blend and luminosity of her watercolors on rice paper. While the oil paint is still wet, laying flat on the floor, she pours a mixture of Galkyd resin and cold wax. The wax chemically melts into the resin. To assist the process, Ross-Paul rolls the canvas back and forth, sometimes even pounds it. The resin and wax pick up the wet paint and carry the pigment in a suspended state in a way that a brush cannot. When dry, the painting appears incredibly ephemeral. At this point, the artist hangs it again and “adds more painterly, muscular marks, which counter the ephemeral,” giving her art its distinct balance of energy, delicateness, floating, melting, and radiating light.

An aspect of Ross-Paul’s life that deeply affects her work was “being the first woman in America to volunteer and receive a cryolumpectomy,” successfully overcoming breast cancer at Detroit’s Karmanos Cancer Center. Now cleared for many years, it has shifted her focus to a cosmic, shamanistic view of life. Her 2003 painting, Juggle #3, on view at her recent solo show at JoAnne Artman in Laguna Beach, depicts a woman running with zest and vigor, as she balances three balls on top of each other. Their colors are orange-red, blue and white. The blue and the orange-red could represent the healthy and unhealthy breast (they are breast size) while the white could represent the “ice ball” that was used for the surgery. Interestingly, this was the last painting Ross-Paul created before finding out that she had breast cancer; and it was an “ice ball” that eventually saved her breast. Since that life-changing incident, Ross-Paul’s work has become a reverie of an altered state of consciousness. Her enigmatic dream-like imagery erodes the mundane as nature and human energy endow Ross-Paul’s art with the unexpected and magically superb.

Laura Ross-Paul’s work was recently on view from August 1-31, 2009, in a solo show at the JoAnne Artman Gallery in Laguna Beach, where she regularly exhibits. She also exhibits at Pacini Lubel in Seattle. Ross-Paul’s new paintings will be exhibited at the Froelick Gallery in Portland, Oregon, in March 2010.