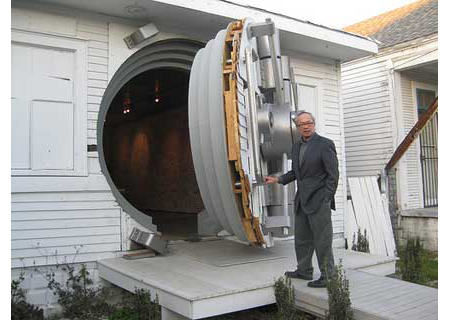 I have been an admirer of Mel Chin's art since the early 1990s, when I included one of his seminal works, "Jilava Prison Bed" (1982) in the exhibition "Cruciformed: Images of the Cross since 1980." Created to call attention to the imprisonment and torture of an anti-communist Romanian Orthodox priest who served twenty-one years in prison and died in 2006, this sculpture really spoke to me.  A cross-shaped bed with prison bars for a headboard and spikes penetrating upward through the mattress, "Jilava Prison Bed" is fairly minimal in form but packs a compassionate punch. It also is a great example of emblematic syntax, the use of familiar symbols or icons, a format that dominated much 1980s art.

While researching works for 1994’s "Old Glory: The American Flag in Contemporary Art," I came across Chin's "DIS-pense & DIS-tribute" (1992), which I included in the exhibition. A more satirical sculpture, the work consists of a vending machine containing packets filled with cut-up pieces of an American flag that had been baked in different spices. Chin considers this work to be a commentary on the banality of junk food and the widespread desire for immediate gratification. I have always interpreted it as a terrific metaphor for diversity and multiculturalism in the United States.

Given this personal history with Chin's art, I was excited to learn that the artist was coming to San Antonio to lecture at the Southwest School of Art in late January. I arrived early, introduced myself to Chin, and sat back to see and hear what this man had to say.

He began the presentation in comedic mode, looking somewhat like a Blues Brother as he sang out the lyrics of Elvis Presley's "Suspicious Minds." He then segued into his presentation of highlights from his current traveling retrospective, periodically peppering his remarks with tongue-in-cheek audience banter (" How many in the audience are Asian-American? … Raise your hands.").

With the retrospective, Chin is currently receiving much deserved attention and critical acclaim for being the brilliant conceptual artist that he is. The depth of his vision and the magnitude of his cleverness were clearly apparent as he presented images from his recent installation, "The Funk & Wag from A to Z" (2012), for which he made 524 satirical collages, every page cut from his late parents' 25-volume 1953-56 Funk & Wagnall Encyclopedia.

But it is for more than just his fortitude as a conceptual artist that Chin should be considered one of the most important artists of his generation. What moved me deeply, even more so than even a great sculpture could do, was when he spoke about recent projects in New Orleans and the Western Saharan desert. Following Hurricane Katrina, Chin visited New Orleans and learned that residents in the devastated St. Roch area, especially children, had suffered from lead poisoning due to heavy concentrations of lead in the soil. In response, Chin initiated Operation Paydirt, which has engaged communities, scientists, and political activists to work towards the eradication of the lead problem. One of his initiatives, the "Fundred Dollar Bill Project," involves inviting children across the nation to draw original interpretations of $100 dollar bills, to be collected and eventually brought to Congress with the idea of exchanging the Fundreds for real funds to put towards lead elimination. In New Orleans, Chin created “Safehouse" (2008-10), a renovation of a damaged house in the St. Roch district with a bank vault for a facade and the installation of all of those Fundreds inside. When Chin spoke about the opening of “Safehouse," he commented that the black youth were so excited that, for the first time, the police on duty were protecting rather than arresting them.

Chin's Western Sahara project evolved through an interesting chain of events. While on his way to Algeria in 2011 for a conference of international artists presenting human rights-related projects at the Algerian refugee camps, he noticed a sign at the airport stating that "0.3% of Saharan solar energy could power Europe." While visiting one of five Sahrawi camps, where refugees depend on international humanitarian aid for food, water, and medicine, Chin suggested they raise consciousness about their plight though a fictional currency called Sollars. But he soon realized he needed to do more. Recognizing that the Sahrawis could only have economic and political independence if they had a real currency, Chin conceived the idea of founding the Bank of the Sun, which would use a solar energy-backed currency that could also improve the environment. After returning to the United States, Chin had a chance meeting with Dr. Richard Corkish, a solar engineer who had designed a power station for the Sahrawi refugee camps. Today, they are working together towards liberating the Sahrawis through the development of a solar-based economy.

When responding to audience questions, Chin remarked on the importance of letting go of his ego, noting that this work is not about him, it is about all the people he is trying to help. Eschewing the long standing credo that art must be about the self, Chin is working for the greater good. And while I still admire him for being a remarkable conceptual artist, I admire him that much more for also being a conscientious activist.