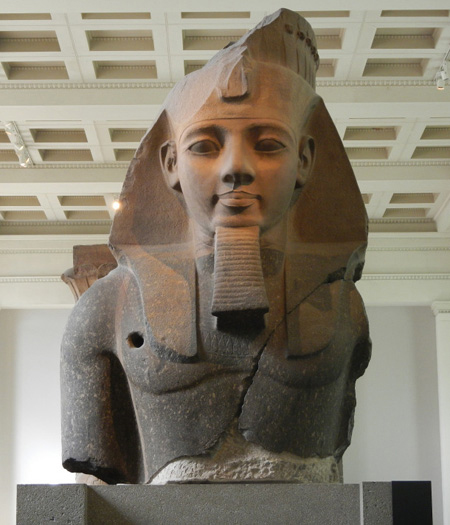 "Statue of Ramesses II, the 'Younger Memnon'," 13th century BCE, at the British Museum. "Look on my works, ye mighty and despair! Nothing beside remains…" – Percy Brysshe Shelly, "Ozymandias."

In 2012, the veteran art critic Irving Sandler posed fourteen questions to colleagues and peers. It was a broadly philosophical survey, and other critics quickly responded, bringing their perspectives to bear. I have been considering the questions in this space, at intervals. Today, we reach Question 10: How has globalization of art and the art world changed art criticism?

The global empire of art continues its expansion around the globe. According to one online listing, March will see seven art fairs in New York, one in The Netherlands, two in Hong Kong and one in Dubai (that plucky proto-democracy that was, you may remember, at one point during the George W. Bush administration, slated to take over the management of American ports). The art follows the money, so the globalization of American capitalism has been accompanied by the globalization of American art as conspicuous display for elites and, on the national scale, a demonstration of economic power. Anyone familiar with the biological competition for alpha-male status via bigger horns or wider-gaping mouths, or, as in one nonviolent ant species, more widely spaced eye stalks, cannot fail to see the imperatives of competition and territoriality at work in human culture. Percy Bysshe Shelley’s poem “Ozymandias” nailed the competitive-display aspect of the art enterprise, that it is bound ultimately to fall into decay. It is a trajectory affirmed by contemporary theories on colonialism and power structure, albeit less memorably. The traditional aesthetic argument for art’s ennobling beauty, truth and power — how quaint it now sounds! — has been replaced by marketing and hype. We have met the enemy, said Pogo, and he is us.

This all touches art critics, too. According to the critic (emeritus) Dave Hickey, “Art editors and critics — people like me — have become a courtier class.” We’re cheap hired help at that. As The New Yorks Times art critic Roberta Smith pointed out, critics should expect a low standard of living if they expect to stay in the game; suffering for the art of others is apparently reward enough.

Does anyone who attends art fairs today really believe that the smorgasbord of undifferentiated sensation and sensationalism serves any real purpose? Uselessness is now cited as a defining characteristic of art, and irony is pretty much mandatory, as it is in the general culture, dominated by ‘hip’ advertising. If art criticism is marginalized, it may be because art itself is marginalized to the production and consumption for elites, by upwardly striving bourgeois bohemians, of amusing, entertaining tchotchkes.

Can anyone with a serious appreciation for or allegiance to art as self-expression, for ideas, emotions and craftsmanship indissolubly fused, take the vast smorgasbord of contemporary art seriously? The aesthetic pluralism that we are fond of touting — hip, tolerant souls that we are — and the arguments that art should be fun, participatory, and anti-elitist argues for an art exempt from judgment or evaluation, for art above or beneath criticism. If art in the traditional sense is dead, as Arthur Danto opined in the 1960s, then so is art criticism a half century later, as newspapers retreat from arts coverage by and large, and from the notion of a public trust to educate and inform. The authentication by experts of dubious newly discovered old-master works by Caravaggio, Michelangelo and Leonardo reveals how market values, far from clarifying, distort and subvert aesthetic perception.