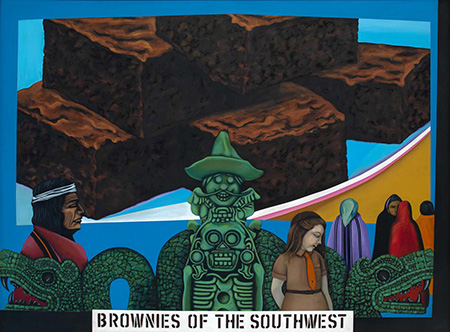 The recent passing of pioneering Chicano artist Mel Casas got me thinking about the current state of affairs for Latino art in San Antonio, a city with a sizeable Mexican American majority. Although Casas' work is represented in the collections of the Smithsonian American Art Museum and the San Antonio Museum of Art, he remains one of those artists whose reputation stands to increase posthumously. It was only at a pop-up exhibition organized for his memorial service by the art historian Ruben C. Cordova that I became aware of the scope and breadth of Casas’ aesthetic achievement. Casas clearly was in tune with the art movements of the 1960s, and had mastered formalism, Pop art, and conceptual art by the end of that decade. Such influences are evident in his best known work, "Humanscape 62: Brownies of the Southwest" (1970), where a plate of chocolate brownies is shown as a pejorative reference to skin color on a panoramic drive-in movie screen that serves as a backdrop to a variety of stereotypical Latinos and Native Americans.

But Casas was not just a painter. As one of the chief spokespersons for the Chicano art movement in South Texas in the early 1970s, he took on a role somewhat akin to that played by Andre Breton during the formation of the Surrealist movement. Like Breton, Casas authored a manifesto in which he popularized the phrase "con safo," which became the movement's official name for a time. Derived from pachuco slang, con safo has many idiosyncratic meanings, including "don't mess with this," which led to the insignia C/S being painted on barrio murals. Its use proved successful in deterring neighborhood kids from tagging them.

A staunch believer in the power of art to effect social change, Casas referred to his profession as "cultural adjuster."   His influence, in this regard, is attested to by the increasing numbers of Latino artists in San Antonio and elsewhere who have not shied away from making socially relevant political art. Previously, in my article on Political Art Month, I acknowledged some of the currently active younger artists.  So now I would like to call attention to some of the key local figures from the Baby Boom generation: Rolando Briseño, David Zamora Casas, and Deborah Kuetzpalin Vasquez.

In the early 1970s, Rolando Briseño was one of the youngest members of the Con Safo group and he still prints the phrase "cultural adjuster" on his business card. Although demonstrably outspoken when it comes to social injustice, Briseño's approach as an artist is more gentle, and today he relies a great deal on education as a tool. For his most extensive series of paintings, he created a compositional format that he calls a "tablescape," where the image of the table becomes the location for depicting a huge variety of foods that are indigenous to the Americas. The paintings also muse on the role of the meal in promoting community and togetherness. Several were painted on napkins and tablecloths, with actual food substances incorporated into the medium. Additionally, Briseño has become an important figure in the areas of performance and public art. From 2009-12 he observed San Antonio's annual feast day by presenting "Spinning San Antonio Fiesta," a ceremonial performance held in front of the Alamo. In order to raise awareness about the myths surrounding the history of the Alamo, Briseño created a giant revolving sculpture of Saint Anthony, with his feet attached to the base of the Alamo. During the ritual, assistants spun the sculpture round and round, alluding to the interplay between truth and myth. Perhaps the most impactful of Briseño's artistic achievements over time will be his public art. I doubt that Casas would have imagined back in the 1960s that a Mexican American artist would someday grace the windows of Terminal B at San Antonio International Airport with beautiful representations of the lintels from 200 San Antonio buildings, hand-painted in yellow, the color of maize.

David Zamora Casas and Deborah Kuetzpalin Vasquez are passionate activists whose art and community-based activities celebrate their identities as both Latino and Queer. A self-taught painter and performance artist, Zamora Casas has exhibited at mainstream institutions such as Artpace, yet he is more likely to be seen at under-the-radar pop-up spaces or community oriented art centers, such as one of the newest entries to the local scene, Ecos y Voces de Arte, located deep in the heart of the Southside barrio. Vasquez is a painter and educator who has taught and exhibited at numerous institutions around the city. In works by both artists, references to ancestry and heritage take center stage, but are recontextualized within the arenas of sexual and gender politics. Zamora Casas achieves his greatest artistic successes when honoring those who are his heroes, heroines, and role models, while Vasquez has made challenging issues accessible through the invention of a comic style Chicana heroine whose name, Citali, is Aztec for "reach for the stars." Overall, their message of accepting diversity is synonymous with one of the other translations that is sometimes given for the term con safo:  With Respect!