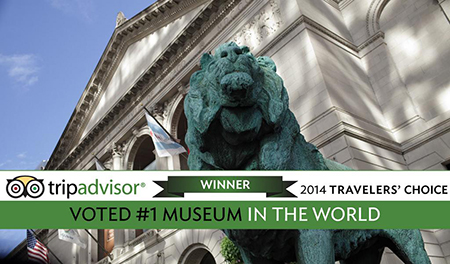 The Art Institute of Chicago on TripAdvisor

The internet has been such a wonderful source of ready information that it’s by now hard to imagine what life was like before it. It’s great that I can type in “best hamburgers in Omaha” and get a couple of pages of choices, replete with customer opinions, starred ratings, photos, maps, and the like (by the way, I have no plans to visit Omaha anytime soon, but if I do I’m going to need some extra napkins). But the internet has also been a source of contrived or exaggerated and unreliable information, things that if not actually manipulated are certainly designed to augment web traffic (and therefore views of advertisers), things like “10 Dumbest Politicians,” or “America’s 20 Best Diners,” or “Top Celebrity Divorces.” Get a Facebook prompt to a site like that and it can go viral. Hundreds of thousands of people will kill a minute or two checking something out, heaven knows why. Those politicians may or may not be the ten dumbest (there is, after all, such a large pool to draw from), and there’s little or no information on who constructed the list, what their qualifications are to do so, whether they have an ulterior motive, etc. But let’s face it, it’s all about providing a little momentary infotainment, sort of positioning the internet as akin to water-cooler chat.

Now, I’m more than happy to confess that I love the AIC; I’ve visited it, as boy and man, practically weekly for decades, I’ve worked for it or the art academy affiliated with it for over half of my life, and my heart swells with pride when I take a visiting friend or VIP on a tour of it. It’s a great art museum, and I’m lucky to live in a city with such an institution in its midst. But the truth should be told — I don’t think there are 10 art professionals anywhere who believe the Art Institute of Chicago is the greatest museum in the world. I doubt there are 10 people who work at the Art Institute who think it’s the greatest museum in the world.

The Louvre, Prado, British Museum, Hermitage, National Gallery of Art in London and an ample handful of others could disappear from the face of the earth tomorrow and the Art Institute of Chicago still wouldn’t be the top museum in the world. Even in the US the AIC is usually ranked somewhere around 4th or 5th among art museums, certainly following the Metropolitan Museum of Art in New York and the National Gallery of Art in Washington, DC, and placed somewhere in a group with the major art museums in Boston, Cleveland and Philadelphia. Note that all of these are east of the Mississippi, their deep collections the result of about 150 concentrated years of lots of cash and ready access to the spoils of Europe. And a quick disclaimer: these evaluations are usually — but not always — rooted in an assessment of these museum’s collections of Western Art from 1300 to the present.

Looking further into the TripAdvisor announcement (past the prompts for hotels, restaurants, airlines, etc.), local press coverage of this hypothesized about the 6,512 people whose enthusiastic reviews put the AIC in the top spot (the Museo Nacional de Antropologia in Mexico City came in second, the Hermitage in St. Petersburg third) and noted, as the Chicago Tribune put it, “This is not a ranking by art experts, of course. It’s a ranking by regular people, thousands of them.” And so it was — and that’s undoubtedly how we should take it, as a bit of good populist fun best taken with a big grain of salt. The AIC has hung a large banner across the main entrance to the museum emblazoned: THANKS FOR VOTING US THE #1 MUSEUM IN THE WORLD. I’ll have to remember that when I’m counting on the web to find me the best fish taco spot in Seattle.