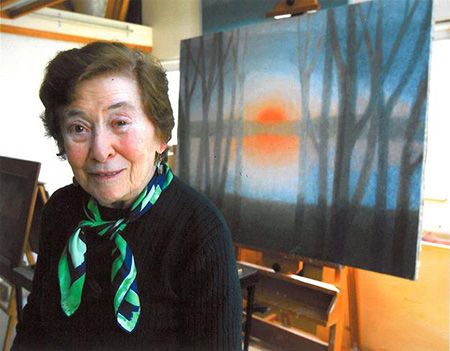 The first anniversary of the death of Pacific Northwest artist Maria Frank Abrams in 2013 is coinciding with a rise in incidents of anti-Semitism in Hungary, where she was born in 1924. A remarkably long life (she lived to 88) following her survival of the Auschwitz, Bergen-Belsen and Magdeburg concentration camps involved a complicated tango between alternately treating, denying, suppressing and ultimately fusing and symbolizing such horrific experiences into her art. The woman who once referred to postwar Hungary as a “cemetery” would not have been surprised at such a resurgence of hatred and prejudice, although she was eventually honored with a Budapest gallery survey of her work in 1994. That event, preceded long before by acts of kindness from non-Jewish friends and relatives before her family’s 1944 deportation, could never fully assuage the loss of 32 family members (including both parents) within one half-hour of stepping out of the boxcars.

Abrams’ relationship as an artist to the Holocaust was one theme of my book, “Burning Forest: The Art of Maria Frank Abrams” (Museum of Northwest Art, 2009). Already suffering from dementia when I began work, she had fortunately contributed to several taped or filmed interviews and oral histories that I was able to draw upon, including Sylvia Rothchild’s “Voices from the Holocaust” (1981) and the Steven Spielberg-funded “Survivors of the Shoah” (1995). The difficulties facing me as a biographer involved the contradiction between her published statements precluding the influence of the Holocaust on her art and the paintings, watercolors and prints themselves, which I view as veiled and indirect yet, in my opinion, unconscious or helplessly unintentional references to that experience.

Modernist abstraction was the vehicle of the artist’s recovery, both in the sense of therapeutic recovery and the retrieval of memory. We can bookend Abrams’ long career with early and late works that deal more explicitly with the events of 1944-45 in relation to those of the long middle period (1960-2000) featuring modernist abstraction in between. Her progress from representation through abstracted cityscapes and landscapes to pure geometric abstraction took decades. Were these escape routes from the hell of memory? Perhaps, but more interestingly, step by step, year by year, transformation and resolution of the horror occurred. Too dreadful to spend a lifetime analyzing, the painful losses, physical punishment, and awful appearance of the camps slowly seeped into her art, but at several removes and only after she mastered abstraction. This mastery came about partly thanks to her studies at the University of Washington and her private studies with Mark Tobey, the area’s leading midcentury artist.

Admitting the seemingly irreconcilable paradox of becoming an artist shadowed by a cataclysm of history, Abrams told Rothchild, “If nothing had happened and the world of my childhood hadn’t been destroyed, I would never have become an artist.” Perturbed, however, at the emphasis in regional newspapers on her Holocaust experiences to the exclusion of her art (“She Was with Anne Frank,” a Canadian headline blared), Abrams subsequently downplayed this, especially when her art shifted to sunny and cloudy Northwest landscapes in the early 1970s. This ambivalence continued after the publication of my book. She and her husband, Sydney, both expressed “chagrin” at my interpretation in another interview. So many cloudy skies, I had argued, could not only be about rainy Seattle; they were also about the darkened, cinder-filled skies caused by the crematory ovens. And so on.

Early on, in four key works sprinkled into a growing number of happier street scenes and landscapes, Abrams attempted to refute what philosopher Theodor Adorno had claimed in 1951: “Writing poetry after Auschwitz is barbaric.” Making art was not only possible for Abrams after Auschwitz; it was imperative. For example, against a pitch-black background, “Sorrow” (1957) displayed thin, rising wisps of fiery orange and gray smoke. “The Parting” (1966) was acquired by the Yad Vashem Holocaust Martyrs’ and Heroes’ Remembrance Authority in Israel. In it, a young woman gazes from one crowd toward another walking away: the artist’s family on the day of arrival and subsequent separation from her. After these, there was silence about the events.

Fast forward to the annual Raoul Wallenberg dinner at the Nordic Heritage Museum in Seattle in 2002. After 40 years, Marika (her given Hungarian name), then 78, addressed the loss of family members. The large-scale photo-collages were done for the exhibition. Adapted from family photo albums and handwritten letters, these were memorial portraits of a beloved aunt (“Rózsa Vilma”) and three male cousins (“Faragó Gábor,” “Faragó György,” and “Létay Iván”). It is as if, after her long career of transmuting sadness into formalist vocabulary, Abrams was able to use her masterful skills of composition and placement to amass and organize tender, painful memorials. Modernism proved completely flexible for such a task.