Really: What IS an Art Fair?
Column by James Yood 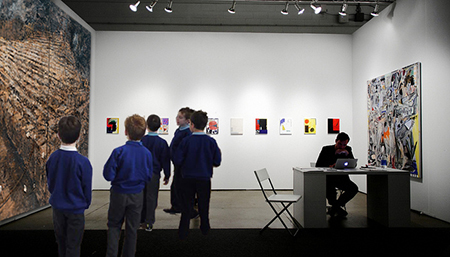 Student-Dealer encounter at the art fair. Composite image by Visual Art Source. Based in part on a photo by Paul Germanos.

Chicago has hosted an international art fair every year since 1980, and its most recent iteration, ExpoChicago, concluded a few weeks ago. I’m sure you’ll agree there’s little new to be said about these fairs. A major one occurs somewhere on this planet every week or two, and over the course of thirty years they’ve been analyzed to exhaustion. The large international art fair has become just another rotational element in the art world landscape. Still, perhaps because of the ubiquity of social media, each one still manages to create a boomlet of attention, a bit of an internet kerfuffle, with those that offer themselves as the sages of contemporary culture rising to varying levels of outrage, as "shocked, shocked” as Captain Renault, to find that exchanges of money go on there. Here’s a little primer, then, as to what an art fair is not, and what it is.

What it is not. An art fair is not an exhibition of modern and contemporary art. It is not curated, and is not organized to propose or convey a single idea about current art. It has absolutely no intellectual agenda at all, and if it provides you with one it’s purely by accident. While a fig leaf of some kind of discourse is laid upon it — thematic panel discussions with local academics, little booths set aside for community art organizations, sometimes a few big name speakers — that’s actually kept to a minimum because such activities take collectors off the floor. An art fair is really not for the public at all, the admission price is set high enough (at ExpoChicago it was $20) to discourage a casual Navy Pier stroller, and the number of attendees (those that aren’t collectors, anyway) is of secondary importance to the organizers of the fair. While some do attend, it’s not for the artists who have work shown in galleries there, watching yourself sold (or worse, not) and evaluated is an experience akin to witnessing yourself being made into sausage, something best not observed first hand. Art students and the like often get free admission because they serve as interested background figures, to give the real function of the fair some character and energy. There’s not a single reason why anybody working at an exhibiting gallery should answer your questions (unless you are a collector); an art fair is not held for the education of the public. (If you don’t believe me, just watch what happens when a college student interrupts a dealer’s cell phone conversation to ask why that Kiefer costs so much.)

What it is. An art fair’s sole purpose is to provide a congenial setting for the intersection of dealers and collectors. That’s it. It exists solely to cater to a need that arose in the 1980s, when the art world became international in a way that had never been possible before, when it suddenly became important for collectors to know what was going on in Caracas, Tokyo, Los Angeles, Johannesburg, Berlin and everywhere else. Before 1980 all a major American collector needed to do was travel to New York once or twice a year and make the rounds to be kept abreast of what was going on. But smart entrepreneurs (ExpoChicago’s Tony Karman among them) realized that hosting an annual venue that would bring galleries from all over the world to a single site for a few days, and surrounding that with enough bells and whistles to make it an event, a place to see and be seen, could succeed financially. And so it has; it’s Art Basel Miami Beach’s turn in about a month, currently the most important art fair in the US. These all offer gallery owners the opportunity to broaden their collector base, do deals with one another (dealer to dealer transactions are the secret subtext of any art fair), create some chatter about themselves, give one of their artists a boost, etc. Most galleries don’t bring their most successful artist’s work to an art fair, those are selling very well at home, thank you. But an art fair is a chance to bring some potentially promising artists along. The art fair has become for many gallery owners the key element in their annual financial plan; one dealer told me “I spend six months preparing for the fair, and six months following up on it.” Years ago sales were primarily made during the run of a fair, but now, in a collector’s market, they often take place in the weeks and months following it. That’s when the emails and jpegs fly through the air to see if interest expressed by a visitor on site can be turned into a client relationship. An art fair is a carefully contrived setting for the mating dance of dealer and collector, the fluttering, the teasing, the cooing, the whispered promises, the tentative caresses, all to be consummated in the final nod of the head, the yearned for “yes,” the glow of the union of a satisfied buyer and seller. That, and nothing else, is what it’s all about. It’s a high-end bazaar, an intricate maze with everyone seeking to discover their particular piece of cheese, with most doomed to disappointment. If you don’t believe me, just ask that student who asked the question about Kiefer — he or she will never forget what happened next.