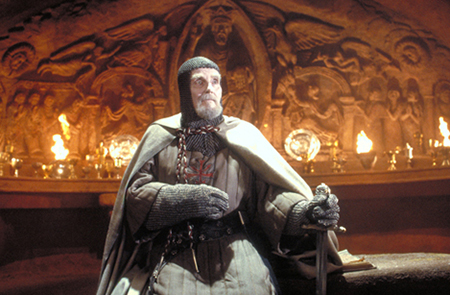 “He chose … wisely,” The Grail Knight remarking on Indiana Jones drinking from the correct Grail in “Indiana Jones and the Last Crusade,” 1989

In December 2012, the art critic Irving Sandler put fourteen questions to his colleagues. I had the temerity to consider them one by one on these pages, and here we are, halfway through, at Number Eight: Has the Internet been good or bad for art criticism? Does it raise the issue of elitism versus populism? Well, in the deathless words of Eric Idle in "Monty Python and the Holy Grail," that’s eaaaasy! The Internet has been both good and bad for art criticism, and it raises the issue of elitism versus populism in a way that perhaps nothing else has in human history.

Much has been written about the internet and the rise of the citizen journalist, or, with the universality of cell-phone cameras and videocams, the citizen witness and whistleblower. The art realm benefits from these new capabilities, too, of course. Art observers and commentators can now capture the passing scene and transmit it to audiences, enjoying several advantages over the old print and video media: 1) immediacy as quick as a Tweet; 2) creative independence: no editors or gatekeepers to enforce Procrustean house styles catering to audience and advertisers; and 3) depth: space is limitless, and articles can be as long as they should be, accompanied by as many illustrations as are necessary. As someone who writes for traditional media and is also active on Facebook (maybe tediously so), I welcome the soapbox afforded by technology as art journalism dwindles into amusing human-interest stories. Shows of merit that cannot be covered in print for various reasons can still receive play online, and in timely enough fashion to actually do them some good. (This internet Newsletter, of course, has the benefits of both relevance and credibility.)

But every silver lining has a cloud. The sheer ease of online publishing encourages not only trolls and flamers, but self-promoters, preeners and fanboys. Serious creators of content should nurture and practice rational civil discourse. Writers on art should make the case for artists, but also for art as an ongoing cultural enterprise, despite what I see as its surrender to a business mentality. To compete with Disneyland and Hollywood is a fatal error; we cannot prevail if sensation, spectacle, and audience participation are the terms of the contest. As Anselm Kiefer recently said, art is not and should not be fun. Not everyone needs to take such a tragic view of history as does he, of course, but rollicking hijinks should not be, in this day and age, our goal and justification; they’re part of the problem.

Does this sound elitist? If so, blame our debased media culture, contaminated by the advertising mindset, which is to create existential uncertainty in audiences — Aldous Huxley memorably characterized this in "Revisiting Brave New World" as the haunted fear of being sexually repulsive—in order to sell to the many new cures. (Wars are sold the same way, with vulnerability the hook; create a need and then fill it.) The recent Ken Burns series on “The Roosevelts: An Intimate History" — Teddy, Franklin and Eleanor — could not have been better timed. America again faces daunting challenges, but without leaders of Rooseveltian caliber, as concerned with the public good, to take on entrenched interests intent on exploiting the masses here and abroad.

Can art be part of the solution? Can art aspire to the populism of the 1930s? Can artists regain a sense that art can be of public interest and even importance? A century and a half of avant-gardism has produced masterpieces, certainly, but the outsider rebel of yore has over time morphed into the savvy purveyor of fashionable luxury goods — a courtier and jester to the global One Percent. The social satirist Ben Shahn wrote about finishing a community mural and being praised by an observant working man; how possible is this today? George Orwell’s “1984" hero/antihero Winston Smith wrote that if there is hope, it lies in the masses. Let us hope that the Ninety-nine Percenters in art, art journalism and art criticism can be part of a civic revival in coming years, and that we as a culture and nation manage to learn from history and escape buying into the imaginary terrors of Room 101, always for sale to suckers. The internet and art can be part of the solution if — as the immortal Grail Knight in "Indiana Jones and the Last Crusade” warned — we choose ... wisely.