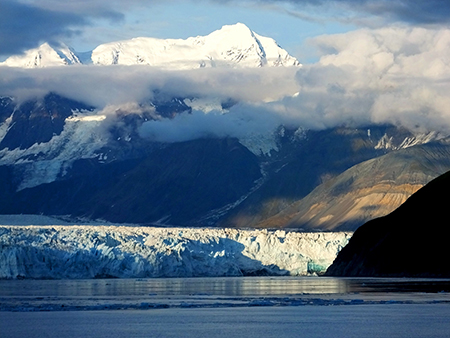 I recently returned from a six-week, 5,500-mile trek through Alberta, British Columbia, the Yukon, and Alaska.  The interactions of mountains, sky, water, and animal life my partner and I encountered were—well, suffice it to say that if I had been looking for evidence of the existence of God, I would have found it on this trip.  But I am an arts writer, not a spiritual seeker, so what I wound up reflecting on most was the relationship between landscape and landscape as it’s depicted in painting and photography.

Those reactionaries among us who remain receptive to the idea of beauty generally take as axiomatic the notion that art at its highest can capture and essentialize the beauty of nature and disseminate this privileged vision to the viewer. From Monet’s gardens at Giverny and van Gogh’s star-streaked night in Saint-Rémy-de-Provence; to the landscapes and seascapes of  Constable, Turner, and the Hudson River School; and the Wild West idylls of Frederic Remington, mid-career Childe Hassam, and Ansel Adams — artists who have harnessed a Romantic and Transcendentalist reverence for nature — an attitude encapsulated in architect Frank Lloyd Wright’s maxim: “I put a capital ‘N’ on Nature and call it God.” To the degree that any of us today has not completely bought into post-structuralism, we cling to the sentiment that in the paint brush or viewfinder of a master, landscape’s majesty can be channeled into aesthetic epiphany, through which the viewer may be transfigured.

This was my own unabashedly retro contention until I went to Alaska.  Although my eyes have taken in the Sahara, the Swiss Alps, the Highlands of Scotland, and, a stone’s throw from my home in Portland, Oregon, the splendors of the Columbia River Gorge, still, it was only Alaska that upended my assumptions and left me questioning whether any artist who addresses landscape can ever hope to approximate the subject matter.

I saw a sunset in Seward, Alaska, that turned glaciers orange and pink and seemingly dematerialized the mountains ringing Resurrection Bay into the same substance as the sky.  It was the Rothko Chapel writ colossal.  I saw glaciers outside Whittier melting into a dozen waterfalls cascading down emerald mountains that put any “Lord of the Rings” CGI panorama to shame.  I saw the Kenai River flowing turquoise, the Chena River chocolate brown, the Yukon like a giant snake with mirrored scales.  Above the Arctic Circle in Barrow the horizon stratified into bands of color purer than any Newman, Kelly, or Riley could conjure.  The tundra outside Deadhorse looked like a moon of Saturn.  A late afternoon sail to the foot of Hubbard Glacier yielded visions more psychedelic than anything I ever saw on psilocybin:  a thousand pointy-tipped ice towers, tilting comically as if sculpted by Dr. Seuss, all the hue and translucence of aquamarine.  As the ship made a broad turn, the setting sun backlit hundreds of icebergs, setting their silvery outlines aflame in craggy rims of molten gold.  Over the next two hours, the sun kept setting, the light-play kept evolving, and the waves lost any resemblance to actual water, taking on an uncanny reflectivity:  an infinite regress of pink-tinted mercury.  My partner and I felt as if we’d stumbled into the film “What Dreams May Come.”  We could not speak, could not contain it.  Finally we had to leave the deck, because we simply couldn’t take any more.  We had been bludgeoned by beauty.

In the aftermath, I’ve acquired a newfound respect for any artist who would aim to evoke the sublimity of nature.  But I’ve also gained a new skepticism toward that aim; for any artist who presumes to “capture” the ecstatic landscape, will find Nature not only a worthy subject toward that goal, but also a formidable adversary.