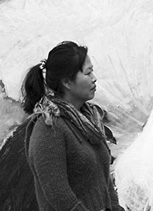 The German Expressionist painter Max Beckmann once advised an American art student to beware the blandishments of modern technology—the car, the movies—because they would steal her soul and distract her from art. What no one anticipated in the 1940s was that even cooler, more engrossing technological distractions would proliferate over the next six decades, providing not only the means of realization for much contemporary art, but, with our modes of perception increasingly changed by gadgetry, its subject matter as well. One contemporary painter whose grit and allegiance to subjectivity Beckmann might admire is the Korean-American Hyesook Park, a prolific artist who has shown widely in Los Angeles and in her native country for the past thirty years. Her work ranges from the earlier colorful figuration with hints of narrative and symbolism to her recent abstractions, monochrome fields marked by scratches, drips, abrasions and bits of collage. Northern Californians got a look at her work recently at the Sandra Lee Gallery in San Francisco, and in “L.A. Paint” at the Oakland Museum of California, featuring the work of eleven Los Angeles painters selected by Chief Curator Philip Linhares.

Park’s career began fortuitously, but has not been without subsequent struggle. Growing up in the small ceramic/porcelain center of Gwangju, Park, despite her artistic ability, had plans to study English in college. However, deciding that her grades were not good enough against her competition, she switched to art (Plan B for so many artists!), and set about taking private lessons, cramming a program normally requiring three years into the five-month period before the admissions exams and winning admission to Seoul National University. Moving with her husband to California in 1978, she spent the next ten years studying English and art at community colleges and at UCLA, alternating between school and full-time painting stints to keep her nascent career rolling.

Although recognition for her large expressionistic canvases came quickly, there were problems, too. Park began experiencing occasional periods of incapacitating depression —perhaps in compensation for her customary prodigious productivity; in addition, she endured the financial worries of an artist and immigrant, a double whammy of insecurity relieved only by a Korean shaman in Los Angeles: “After I visited her, I stopped worrying. She gave me some wisdom deep inside, and I stopped carrying around that worry.” Recently, a studio fire destroyed twenty years’ work—hundreds of huge canvases and thousands of drawings—but curiously this loss, far from being devastating, proved liberating: it cleared space for new work. Park began experimenting with metallic gray diluted sumi ink brushed over gessoed and modeling paste; during the thirty minutes before the ink dries on these large canvases, she scratches and scores the surface quickly and intuitively, using metal tools wielded by both hands simultaneously.

The resulting symmetrical forms, white emerging from a dark matrix, suggest nocturnal landscapes and seascapes while remaining clearly physicalized gestures. Viewers inevitably see paintings like Pond, Civilization Dust, Constellation Flower and Time to Endure as elegies for the lost, charred paintings, but erroneously, just as reviewers who discerned traces of Tapies, Johns, Twombly and Kiefer here may be equally misguided. Park’s methods are experiential, not analytical (although she reveres Caravaggio, Redon, Munch, Rothko and Guston). “Through painting, I search for or create space that I find reflected in Asian and Western art traditions,” she says. “I am looking for depth of space represented on a flat surface. This depth of space goes beyond three dimensions to depict a personal cosmology. The content of my work is derived from political events, the history of painting, and personal experience.” Park writes about art for The Korea Times, incidentally, and The Oakland Museum has just acquired one of her abstractions, Rain, for its permanent collection.

Hyesook Park showed her work recently as part of a group show entitled “Exploration & Celebration II” at Sandra Lee Gallery in San Francisco, and will be showing in October at Interart Channel in Seoul, and in 2010 at S1F Gallery and Andrew Shire Gallery, both in Los Angeles.