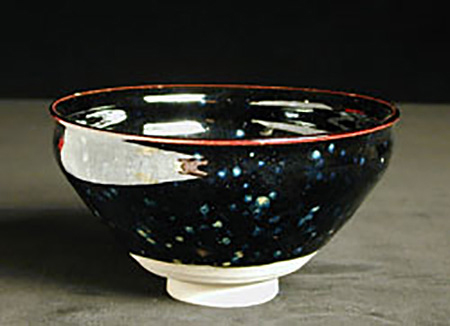 As I walked up the red-carpeted steps toward the assembled dignitaries at the Museum of the Chinese Revolution facing Tienanmen Square, many thoughts crossed my mind. At 3:00pm on October 5, 1992, the “Kazuaki Kita” exhibition opened and many guests poured into the special temporary exhibitions gallery. It honored a Japanese ceramic artist about whom I had written when I first saw his work at the Art Gallery of Greater Victoria, British Columbia in the early 1980s. The exhibition was part of a broader program that year to commemorate the 20th anniversary of renewed cultural and economic relations between the People’s Republic and Japan. At that time annual Sony sales in China were around $20 million per year; today they are closer to $200,000,000.

As the only American citizen invited, I felt honored to be present at a turning point for Chinese-Japanese cultural relations: Mr. Kita was the first Japanese ceramic artist to be so honored in the People’s Republic.

Shortly before the official opening ceremony began, we were ushered into a nearby room with a semicircle of large beige upholstered armchairs where we sat, were served tea, and each given a small red silk flower to wear on our lapels. Mr. Kita was warmly greeted by Chinese officials from the worlds of art and culture and the ministry of light industry, among others. Only a small number wore Mao suits. The rest were dressed in dark business suits. Our group of Japanese officials and Mr. Kita’s entourage mingled with Communist Party ministers and interested civilians invited to attend.

During the ceremony, each dignitary, including myself, was introduced in Chinese and Japanese before national television cameras and applauded by the audience. I felt proud as an American to be attending an event bringing together two now-friendly nations through the shared art of ceramics.

Mr. Kita's beautiful calligraphies suspended on panels behind the pedestals for the pottery were impossible for me to appreciate because I am unable to read Chinese or Japanese. But I have always responded strongly to their exuberant brushwork as well as his ceramic sculpture and functional wares. These were beautifully displayed in glass cases with individual silk cloths beneath each object.

One series in particular featured high-fired, rough stoneware masks meant to resemble the burned faces of Hiroshima, the hibakushi. These had a particular resonance for the Chinese who were not used to the Japanese expressing victimhood let alone, as they saw it, empathy for war atrocity victims. Mr. Kita, who had studied art in Shanghai (hence his credibility with the Chinese) was repeatedly singled out by the Chinese hosts for his “courage” in addressing the uncomfortable topic.

That evening was only the beginning of a two-week visit that was rich in startling and ironic moments not to mention substantial shared pleasure among the twenty or so members of the Kita delegation. Not speaking either Japanese or Chinese, I nonetheless was appreciative, thanks to both translators, of the warm wishes frequently exchanged.

One high point that day was our magnificent banquet at the Diao-yutai State Guest House in Beijing. However, before the state dinner, we were taken on a tour of the Guest House. When it became embarrassingly apparent that someone was actually occupying the quarters, one of our party inquired who that might be? “Oh, yes, it is Nelson Mandela,” the unsmiling young guide responded. “But we made it clear he had to dine out because we were conducting your tour of the rooms tonight.” The Japanese were speechless.

In the Diaoyutai Guest House banquet hall, we were seated in a smaller room filled with seven circular tables each seating eight guests. Atop each white tablecloth, a single antique gold-and-cloisonné vessel was displayed, somehow having escaped the ravages of the Cultural Revolution three decades earlier. After greetings from Zhang Zhi-min, the special assistant manager, and reciprocal remarks by Mr. Kita thanking him for his hospitality, we dined on, among other things, cold jellied turtle soup, shark-fin and sea-cucumber soup, five-spice deep-fried duck — and ice cream. Knives and forks were set alongside stainless steel chopsticks. Wine was served as were dinner rolls.

The dinner at the Beijing International Hotel the night before was hosted by Mr. Kita for staff of the Museum of the Chinese Revolution who were, in turn, curating his beautiful ceramics and calligraphy exhibition that opened later that week. Also at the dinner were immaculately suited representatives of Japanese companies in China. Amid the numerous toasts it was widely agreed that the evening was a high point for appreciating Chinese cuisine and making many new friendships. With a greater flow of alcohol than the following night, Sino-Japanese camaraderie intensified toward that of old friends. All the Chinese guests were government employees from various state-controlled import/export ministries.

(Part two to be published in September)