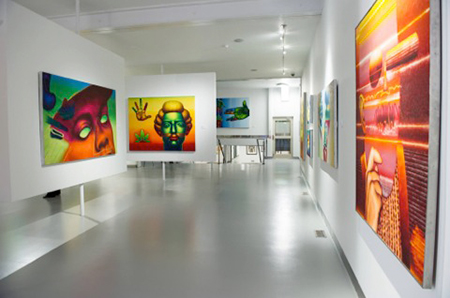 Installation view of the Ed Paschke Art Center, 2014, all paintings by Ed Paschke.

These have been such difficult and painful years for art spaces — art museums, community art centers, not-for-profits, alternative spaces, commercial galleries, etc. — that when two new cultural institutions are opening in your home town you probably should just shut up and say “thank you.” But there are interesting differences in the two new spaces in Chicago, one recently opening its doors, with the other scheduled to be ready for business in 2018.

The odds are you’ve heard something about the latter, the Lucas Museum of Narrative Art, which will house the collection — said to include some 500,000 items — that ‘Star Wars’ director George Lucas has amassed in what will be a flashy and highly visible new museum on Chicago’s downtown lakefront. The odds are also good that you haven’t heard much, if anything, about the one that’s just now up and running, the Ed Paschke Art Center, that opened this summer in a converted office supplies store in a working class neighborhood on Chicago’s Northwest side.

Let’s start with Paschke. Ed Paschke (1939-2004) was probably the most important painter in Chicago during the second half of the twentieth century. He was a signature figure in Chicago Imagism and precisely the kind of tough and edgy blue collar working class kind of guy Chicago has always treasured (Mike Royko, Nelson Algren, Studs Terkel, etc.). He was born, raised, educated, lived and died in Chicago, a Chicagoan to the core. That the Ed Paschke foundation, headed by his children Marc and Sharon, should, with Vesna Stelcer and Lionel Rabb of the Rabb Family Foundation, have secured a space to permanently display a selection of his paintings (currently about 40 of them) is certainly appropriate. On my two visits there it seemed to be very professional operation, fully up to museum code, and the painstaking recreation of Paschke’s studio within it certainly is an attention grabber. Placing it 10 miles from downtown makes it a destination mostly for Chicagoans and aficionados; no tourist is going to accidentally pass by. While the opening of the Paschke Art Center received a fair amount of local press, there’s been scant national attention devoted to it. And that’s a shame — it’s a well-deserved honor to a great American artist, and those who seek it out will be amply rewarded.

The experience, to date, of the Lucas Museum couldn’t be more different. It’s four years away from opening, but already has been featured on television and the front pages of newspapers all over the country; the ‘competition’ for which city would receive Lucas’ largesse was very publicly chronicled. His final decision not to leave it to San Francisco or the Bay area (the site most closely tied to his life and career) but to Chicago, a city not identified with him at all (though the home base of his wife, Mellody Hobson) was a bit of a stunner. All the local power brokers were heavily involved, from Mayor Rahm Emanuel on down, and a prized 17-acre lakefront location, currently part of the parking lot just south of Soldier Field, has been set aside for it. It’s not to be solely a Star Wars museum (though his personal records, story boards for his films, etc., will be part of it), but reflective of his larger interest in narrative culture, including Lucas’ collection of paintings by Norman Rockwell, Maxfield Parrish and others.

Much will happen these next four years. There are already lawsuits in the works to prevent the building of the museum, regarding it as a violation of laws restricting building on Chicago’s downtown lakeshore. Lucas has selected his architects. Ma Yansong, founder of Beijing’s MAD architects will be lead designer, with Chicago-based VOA Associates and Studio Gang the supporting architects. It’s too early to tell if this will be a celebrity shrine, a mass entertainment venue, or something else, but to date it’s showing all the trappings of a public extravaganza, a bloated budget, lots of photo ops, with more concerns aired about traffic flow and lake access than about the content of the museum. (The most curious factoid I gleaned from the press was how few feature films George Lucas actually directed: six).

If the Rock and Roll Hall of Fame and Museum can be in Cleveland, then the Lucas Museum of Narrative Art can be in Chicago. But just as every city has something in it pretty much reserved for tourists, every city also has other things more central to what really defines it,  mainly meaningful to locals, that’s rooted in what makes a place both specific and special. When you visit Chicago in four or five years, do yourself a favor: after you’ve had your picture taken standing next to Chewbacca, catch the Blue Line train from the Loop to the Jefferson Park stop, walk a block and check out the Ed Paschke Art Center. Guess which one tells you more about Chicago?