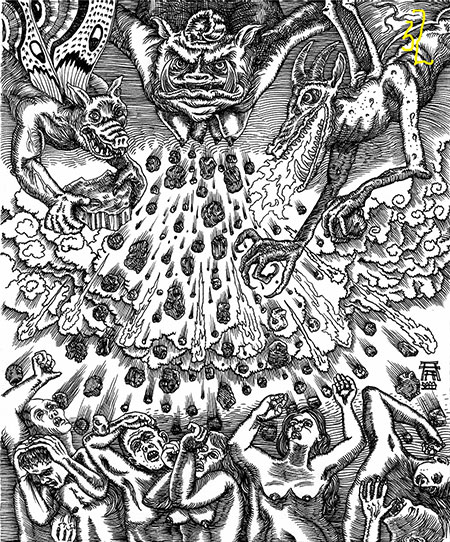 San Antonio is a city that enjoys commemorative events and celebrations. While Fiesta remains the best known and highest profile of such observances and draws numerous tourists each April, the city's creative class presents a variety of alternative special events throughout the year. September begins with FotoSeptiembreUSA. a citywide festival of photography exhibitions. Artpace's Chalk It Up, which features sidewalk chalk drawings installed along a temporarily closed downtown street, and Una Noche de la Gloria, an evening Latino arts festival held in the Westside barrio, occur in October. March is known as Contemporary Art Month, with a multitude of pop-up projects taking place. Luminaria, an evening of mostly outdoor site-specific installations and performances, began in 2008 as an initiative of Mayor Phil Hardberger's and has recently moved from March to November. Contemporary Art Month was traditionally held in July. When the organizers traded that spot for March in 2010, artist/activist Gene Elder was prompted to start a grass-roots effort and proclaimed July to be Political Art Month.

Elder, a Duchampian conceptual artist who once ran for mayor and maintains the city's LGBTQ archives, believes that all art is political and felt the need to celebrate that. So in keeping with the spirit of the celebration and this being July, I would like to shed light on three San Antonio artists who presented exhibitions of passionate, politically-charged art this past season: Vincent Valdez, Albert Alvarez, and Fernando Andrade. Valdez and Alvarez are San Antonio natives who grew up in the city's Southside barrio. Andrade was raised in Ciudad Acuña, Mexico, six miles south of Del Rio, Texas. All are under forty.

Over the past decade, Valdez has presented a stream of solo exhibitions on relevant topics of our time. In 2009, the San Antonio Museum of Art exhibited Valdez's "El Chavez Ravine," a project commissioned by Ry Cooder that focuses on the displacement of the Chicano community from the Chavez Ravine neighborhood of Los Angeles for the building of Dodger Stadium. After seeing a reproduction of a Valdez painting depicting the Zoot Suit Riots of the 1940s, Cooder sought out Valdez, brought him to Los Angeles, and set him up in a studio to paint the story on a vintage 1953 Chevy ice cream truck. Influenced by the movies, Valdez painted vignettes on the truck as if they were different scenes on a storyboard and, with meticulous attention to detail, executed the entire work in oil.

More recently, Valdez completed a moving series of paintings and drawings about the traumas faced by soldiers returning home from Iraq and Afghanistan, which was exhibited at the McNay Art Museum. Currently at Artpace, Valdez is presenting a new series of paintings entitled "The Strangest Fruit," in which he addresses the historically obscured issue of the lynching of Mexicans and Mexican-Americans in the state of Texas, which occurred from the late 1800s through the 1930s. In this series, Valdez combines his skilled proficiency at Old Master painting techniques with a very contemporary mode of presentation. In preparation for the paintings, the artist enlisted friends who, as models, assumed poses based on actual photographs of lynchings. To achieve this, they actually engaged in safe but strenuous re-enactments with the use of ropes. In the paintings, Valdez's classically rendered figures are shown against stark white backgrounds, with the emptiness of the staging referring to the erasure of history. With ropes also removed from the scenarios and the figures bathed in an unnatural glowing red light, the images are at once poignant and dramatic, calling out for us to reflect upon their meaning.

Like Valdez, Alvarez is a master draftsman. In that he is a huge admirer of Albrecht Dürer, it is not insignificant that his Facebook identity is "Albrechto Alvarez." In a recent retrospective held at Bihl Haus, Alvarez exhibited a bold grouping of his obsessive and intricately detailed narrative drawings on such topics as drunkenness, drug addition, sex, death, poverty, and war. Although Alvarez provides viewers with an up-close look at society's underbelly, he takes his cue from Dürer as he sweetens the experience with delicate lines, vibrant cross-hatching, and a quiet luminosity which suggests that everything we are looking at may be destined or divinely ordained.

Andrade, the youngest of the three artists, entered the scene earlier this year with a memorable exhibition at the Hausmann Millworks of sensitive drawings based on memories of growing up amidst the violent atmosphere along the border. Like Valdez, Andrade works from the model and isolates lone figures against barren backgrounds. In this instance the model is the artist's younger brother, a small boy who is holding a make-believe gun, made of sticks, that spews out off-color phrases in Spanish. Drawn in graphite with the effect of a soft chiaroscuro, the child depicted in each drawing appears vulnerable and impressionable in responding to the brutal everyday realities of a gun culture.

Taken together, the recent exhibitions by Valdez, Alvarez, and Andrade demonstrate the timeless and continuing efficacy of presenting difficult subject matter in a palatable and accessible manner, one that is visually poetic. While preserving some of the styles and practices of the art historical past, these artists bring us closer to understanding the present.