Will Santa Monica Destroy Bergamot in Order to Save It?
Editors' Roundtable
Column by Bill Lasarow 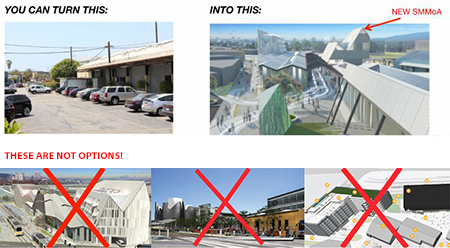 The sound of distant thunder may be about to produce a summer squall over the now venerable 20-year old gallery center, Bergamot Station. What transpires in Santa Monica will reverberate well beyond Southern California because, if claims by the tenant galleries are correct, the possibility of a $100 million redevelopment project to purportedly upgrade this cultural destination would turn out to be a stake driven through its heart instead.

In response to the incoming Metro Rail station, now under construction, at Bergamot and other West Side locations, Santa Monica City released a Bergamot Area Plan (BAP) in 2011.  At the City’s request a trio of developer/architect teams submitted proposals for redevelopment of the complex. Overseen by the Cultural Affairs Department, one developer, 26Street TOD Partners was recommended. The City Council initially voted to hire the firm, but soon reversed that decision, tabling it when it became apparent that the galleries the original BAP intended to benefit protested that the plans of the developer in fact posed an existential threat to the viability of the more than 30 art galleries.

The broad outline of the proposed redevelopment, envisioned as costing about $100 million, includes a new building for the Santa Monica Museum of Art; so-called “green spaces" that would create a park-like element within a quasi-bucolic “town square” setting. The reason that the galleries — at least those who bothered to read through the various development proposals — entered a state of shock for the most part related to the new proposed parking and the mixed-use environment they would be thrust into.

The need for a new parking arrangement is going to have to be resolved no matter what: The new Metro Rail station alone will stretch the current lot-within-a-compound beyond its ca. 350 car capacity. But if an underground lot is the answer (and would the proposed upgrade to about 500 spaces be even close to a sufficient increase?), it is the construction of this hole in the ground that chills the Bergamot galleries more than anything else. As more than one pointed out, “Where will folks part in the meantime? How will I get my artists’ work in and out — by parking two blocks away and carting it in?"

As best as I have been able to glean, the price tag for the redevelopment of the property is only a number. If public money has been set aside, or is being funded by outside sources such as the federal government, I am not aware of it. Perhaps it will be another job of the developer to attract private investors. If the current master lease, currently held by Wayne Blank, also co-owner of Shoshana Wayne Gallery, costs $500,000 per month, no wonder there has been such stability at Bergamot.  Art galleries notoriously require an exceptional amount of space compared to most other businesses.

Exterior glam and a lovely town square setting is not what most gallery owners prize; an interior space large enough to accommodate the ambitions of their artists and a proper setting to view art top their wish lists. In any of these lovely new development proposals I find it easy to imagine new storefronts attracting shoppers and diners who get off the trains to — shop and dine. If the investment is going to pay off to whom do you lease? A boutique willing and able to pay a premium for each square foot of a 1,000 square foot space?  Or a gallery that needs a cost subsidy to occupy 5,000 square feet? The writing would be on the wall, and we are not talking about that of a hip young graffiti artist.

Everyone seems in agreement that the day the new Metro Rail station opens next year is the day the parking issue goes live. Without at least a temporary solution those galleries will be hard pressed because art fans wanting to visit their exhibitions will start having trouble getting in and out. Everyone seems to have their eye on the city yard that occupies Michigan Ave. just outside the Bergamot complex, though I am told it will take two to four years before new parking can be developed there. So what is the solution? No one seems to know, or is willing to offer a convincing solution. It’s easy for me to ask: How do you build a rail station with concurrent plan to address the parking needs of the ridership? I am certain that the answer is not to invest in an expensive commercial re-development project that will either drive away the very cultural center the original BAP stated the City intends to preserve by digging a big hole in the short term, and that will eventually drive the rest away with expensive leases and bad storefront matches in the longer term.