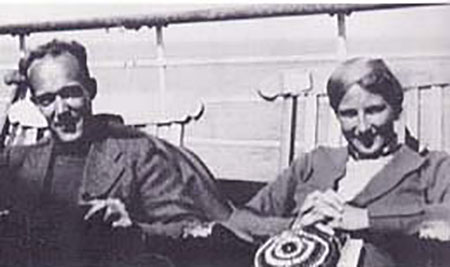 Just as the rise of modern art galleries was largely in the hands of women in the Pacific Northwest, so art criticism was founded and framed largely by women writers. Looking back, the most significant early figure was Margaret Bundy Callahan (1904-1961), first wife of artist, Seattle Times art critic, and Seattle Art Museum curator Kenneth Callahan (1906-1986).

Art critic for The Town Crier, Seattle’s answer to The New Yorker, in the 1930s and 1940s, also a journalist, poet, and nature writer, Margaret Callahan died early, at 56, just as her son Tobey was heading off to graduate school in forestry at Yale. At first, it’s hard to understand why it took nearly 50 years before the family collated and edited her writings into the current tome, “Margaret Callahan:  Mother of Northwest Art” (edited by Brian Tobey Callahan, Trafford Publishing). Despite Tobey Callahan’s widow’s reticence, who will only grant that the two women “were very different people,” one suspects it was the jealousy of Beth, Callahan’s second wife (who passed away in 2000) and it thought to have resented her predecessor’s achievements. She appears to have kept the boxes and papers hidden for years at their Long Beach, Washington cabin/studio.

Artist William Cumming’s autobiography, “Sketchbook: A Memoir of the ‘30s and the Northwest School” (UW Press, 1984) placed Ms. Callahan at the forefront of the group that included her husband, Kenneth, along with Mark Tobey, Guy Irving Anderson and Morris Graves. An intellectual den mother in Cumming’s view, she hosted regular dinners and salons of her own, wrote extensively as a journalist and critic, and kept the personal journal between 1930 and 1961 that forms the basis of this book.

All of Cumming’s accolades — and more — are confirmed. A brilliant, poetic nature writer, she and Kenneth spent years living in cabins in the Cascade Mountains, commuting back to their home on Seattle’s Capitol Hill. Part of the in-crowd for decades, her acute observations about the largely homosexual Big Four place them in a human perspective and offer eyewitness reports on major events of the century: the Great Depression, Pearl Harbor, Hiroshima and the Cold War.

Dragging Kenneth to Great Books groups, Margaret is known to have read widely, including D. H. Lawrence, Herman Melville, Aldous Huxley, Ernest Hemingway, Malcolm Cowley, and Lewis Mumford, not to mention John Stuart Mill and others. Her thoughts on society are amplified by real-life experiences, as when their Communist Party-USA friends harassed them and struggled to explain Stalin’s non-aggression pact with Hitler. Reminiscences of her childhood in the Greenwood neighborhood, accounts of petty squabbles among art denizens as Tobey’s and Graves’ stars rose in New York, and beautiful descriptions of the Pike Place Market shine as first-person accounts.

With such a mass of material, Tobey Callahan deserved a professional editor and proofreader to help him correct the numerous misspellings of important names and to better structure the narrative arc of her life. Editorially, the book is a mess.

Some time ago, I became convinced that it was she who ghost-wrote Kenneth’s many reviews for the Seattle Times, Art in America, ARTnews and Art Digest. I cannot yet prove it, but I strongly believe that her writing career — like so many other women historically — was stunted by her role as artist’s spouse and full-time parent. She never got to write the books she planned to in the memoir. She simply didn’t have enough time. Her son’s effort is a tardy beginning, but a full-dress biography and better edition of her writings are still needed, waiting for some industrious art history graduate student or independent scholar to undertake. Margaret Callahan deserves no less.