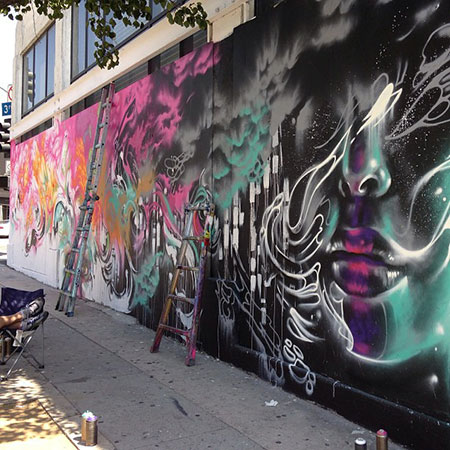 Well things are never as simple as they seem, or as we would like them to be. It can drive you nuts; but in a free society there are lots of self interested people who will break your best intentions to bits on the altar of narcissism and greed, and that is just the way the world works. And if the enabling force of profit fuels that conceit, you are also talking about power (think about whose though). However glamorous a veneer that money purchases, whatever crowd it may attract ... heck, you decide what it says about quality. I've got my own preferences.

Los Angeles recently passed a landmark mural ordinance, the central intent of which was to foster a new creative renaissance of art murals on the public walls of the city. For over a decade a signage ban that included murals on private property, resulting from a federal court ruling on the constitutionality of the City's sign ordinance, decisively inhibited the creation of top quality wall painting along the lines that had established L.A.'s reputation as the world's mural capital during the second half of the last century. But the reason for that ban was the need to control commercial signage that most regard as either a real or potential blight. Sign companies and corporate advertisers predictably feel otherwise: Cha-ching!

Following a ruling by the Ninth Circuit Court of Appeals that overturned the 2002 case, the local government finally got its act together to reform that ridiculous ban and once and for all, and helped along by the active lobbying and organizing of the Mural Conservancy the new law was signed by Mayor Garcetti in September. The distinction between a commercial sign and an art mural is now established. The intent to control the sign companies, with all of the legal land mines implicit, remains a work in progress. But at last the right to create art murals had been liberated!

Thus when MCLA Director Isabel Rojas-Williams and KCET reporter Ed Fuentes began to report on the sudden emergence of murals that snuck in commercial messages and logos in the context of what to a casual observer looks like hot new urban art, my initial reaction was one of dismay. Seemingly overnight someone formulated a plan and got artists to sign on to it. I can just hear some under assistant West Coast promo man convincing an artist that it is all cool: "Hey, we've got a right to make a living, and Converse shoes and Miller beer just need you to include a little something. Make an awesome mural so we can ALL come out ahead!"

Sure enough, according to a post by Fuentes, one Daniel Lahoda has been midwifing these deals. One mural just completed at Third and Main Street in downtown L.A. gets right down to business with a company logo as its centerpiece. And it was painted over another mural - non-commercial - painted by Hueman (a.k.a. Allison Torneros) just last summer under the aegis of the selfsame Mr. Lahoda. Fuentes quotes Lahoda: "Thank god we have the art and entertainment industry to support the arts as private patrons." Respectfully, this assertion is full of crap. These are business transactions, a return on the investment is expected. This is NOT patronage. There is plenty of room in the law for legitimate patronage.

However these deals played out, and however well executed the resulting murals may be, they are NOT in compliance with the new law in letter or in spirit. Period. "Original Art Mural. A one-of-a-kind, hand-painted, hand-tiled, or digitally printed image on the exterior wall of a building that does not contain any commercial message." To quote Ralph Lawler, "It's the Law," and they are in violation. And they are in violation of additional State and Federal laws as well (the California Art Preservation Act [CAPA] and Visual Artists Rights Act [VARA] respectively). They cannot be registered as recognized and protected art murals. These so-called murals can stay in place either until the next "mural" is commissioned by the next corporation to promote the next product. Or City Hall can cite the property owner and demand they remove the, uh, sign, or face a fine and possible legal action.

That is the way the world works too.