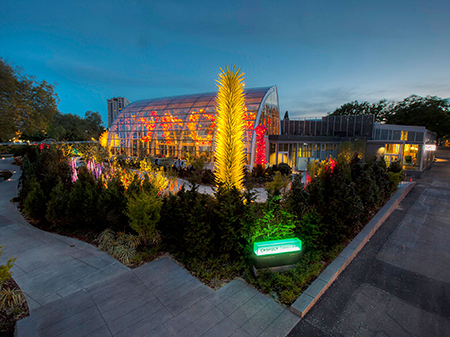 Evening view of the Chihuly Garden and Glass, Seattle, 2013.

Beginning with an early solo show at the Decorative Arts Museum of the Louvre in Paris in 1986, Dale Chihuly’s scope as an artist went global. Nearly 30 years later, he is widely considered the most important glass artist in the world. Why? As the Chihuly Garden and Glass (CGG) in Seattle begins to celebrate its second year, visitors can trace the arc of the Tacoma-born artist’s career from series to series, room to room, book by book. With an undergraduate degree in interior design from University of Washington, an M.S. in sculpture from University of Wisconsin, an M.F.A. from Rhode Island School of Design (and throw in a Fulbright to Murano, Italy for good measure), Chihuly’s genealogy is classic: all the great American ceramic and glass artists came up through the nation’s postwar higher education system. He also headed RISD’s sculpture department for a decade. After four summers at Haystack Mountain School of Crafts in Maine, Chihuly got the idea for a summer glass school in the Pacific Northwest, the Pilchuck Glass School, which he co-founded in 1971.

In effect, he was putting in motion all the steps for an international career and actually rescuing Italian art glass from its doldrums in the process. By bringing over Venetian master blowers and hot-glass sculptors like Lino Tagliapietra and Pino Signoretto to teach Pilchuck students (some of whom became Chihuly studio team members), Chihuly managed a bloodless, revolutionary technology transfer of skills from Italy to America. In turn, when the Italians returned home, refreshed and materially enriched, Venetian glass was re-energized and greater global recognition grew for the individual Chihuly collaborators who followed his example.

The repurposed building next to the Space Needle (which helped fund the undertaking) is surrounded by two acres of landscaping by Richard Hartlage Land Morphology that echo prior Chihuly garden installations, the first of which was at the Garfield Park Conservatory in Chicago in 2001. Last year at CGG, over 26,000 bulbs were planted to accompany the outdoor displays of glass, all centered with a large glass “conservatory” used for private parties and charity fundraisers. This, too, recalls a previous body of work, the “Garden Cycle,” the most important of which was at the Royal Botanic Gardens in Kew, England in 2005.

Americans are unaccustomed to one-artist museums, but they abound abroad. With a disused video arcade to convert, Owen Richards Architects transformed an ugly space into a $20 million facility with a dozen separate display galleries, a shop, and a café, all sporting selections from the artist’s enormous collection of kitsch Americana. Readers may have visited artist museums in Europe such as the Villa Stuck in Munich or the Picasso, Monet, Gustave Moreau and Victor Hugo museums in Paris. In the U.S., Denver’s Clyfford Still Museum is the newest: it joins other American artist museums around the country such as Donald Judd (2); Morris Graves; Russel Wright; Norman Rockwell and Georgia O’Keeffe. The first Chihuly-dedicated museum was the Dai-ichi Museum in Nagoya, Japan, opened by billionaire pachinko-parlor magnate Shigeru Ichihara in 1997.

Plans for the CGG were not without controversy and objections, chiefly from, strangely enough, other artists and civic activists, many of whom protested what they believed was the “privatization” of Seattle Center, the central cultural campus left over from the 1962 World’s Fair. Approved by the powers that be, the CGG is positioned among numerous arts groups at Seattle Center including the opera, ballet, ballet school, children’s theatre, and two professional theatre companies, all of which are private organizations. Since its opening in May 2012 (when CGG signed a 30-year lease), over 400,000 locals and tourists have paid the $27 admission for adults. This contrasts with the $10 ticket to see the permanent Chihuly galleries at Tacoma Art Museum and $12 for the Museum of Glass, also in Tacoma, the latter of which has the “Chihuly Bridge of Glass” as well as its “Venetian Wall,” a giant outdoor display case that is freely accessible. “Monarch Window” at Union Station next door (now a federal courthouse) is also open to the public without charge.

To process through the CGG, visitors walk through darkened galleries with dramatic lighting that begins with neon installations, then the “Tabac” and “Seafoams” series, followed by a “Persian” ceiling, chandeliers, “Macchia,” “Boats,” “Mille Fiori,” and related drawings and paintings. Strictly adhering to the artist’s wishes (there is no professional resident curator), the displays reflect Chihuly’s background in interior design, with one area, the Northwest Room, approximating the living room and lounge at the Lake Union Boathouse (the artist’s former residence and current hotshop) that contains Edward S. Curtis photogravures, Coastal Salish Native American woven baskets and a wall of vintage Pendleton woolen blankets.

Included in 150 U.S. art museums and 79 foreign art museums in Singapore, London, Australia and New Zealand, Denmark, France and 23 in Japan alone, Chihuly’s art is now comparable on many levels to Louis Comfort Tiffany’s. Even though Chihuly has been grouped with Post-minimalists of his generation such as Dennis Oppenheim, Eva Hesse and Buster Simpson (with whom he co-founded Pilchuck), Chihuly, now 72, is more prudently paired with Tiffany. Both managed huge production shops for gallery sales and architectural commissions. Both expanded the limits of what glass can do and both embraced ornament and color in radical ways. And both, of course, received international acclaim.

In addition, Chihuly has his own publications imprint, Portland Press, for related promotional posters, prints, calendars, videos and DVDs, although his most recent publications have been by Harry S. Abrams. “Chihuly Garden and Glass” is $38.33 with essays by TAM curator Rock Hushka and Leslie Jackson Chihuly, the artist’s wife. Another reason to visit the Seattle-Tacoma area, Chihuly Garden and Glass will continue to attract those who cannot get enough of the mesmerizing, chromatic wonders of Dale Chihuly.