Requiem by a Teacher's Pet
Column by Bill Lasarow 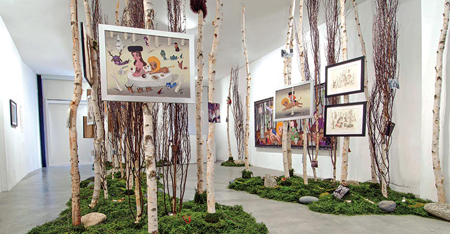 An unusual installation and film by Gary Baseman, already a bit of an art world anomaly having crossed over from a smashingly successful career as a cartoonist, toy designer and animator ("Teacher's Pet"), had me racking my brain. I've always maintained a healthy respect for artists whose aesthetic thinking and impulse carries them outside their comfort zone, particularly when they establish the foundation of a successful career. But this guy is trying to change the feeling behind a style he's holding on to. Radically.

Perhaps the most dramatic instance in contemporary art of a sudden shift in style was that of Philip Guston, who defected from right being a straight down the middle Abstract Expressionist acolyte back in its 1950s heyday to a representational mode--rather cartoonish at that, but not at all funny. Truth to tell, at this point Baseman's relationship to Guston is more aspirational than established. The thorny problem lies in the relationship of style to expression and poetry.

The abandonment of style, and I want to emphasize that there is a big difference between a true signature style and the grappling of a less than mature artist to arrive at something that is truly their own, is uncommon but relatively frequent. Go back to Michelangelo's late Mannerist work for a great example of a tendency natural to an artist that gradually takes shape as an undercurrent until it bursts forth seemingly fully formed. After the initial surprise we can look back and with hindsight exclaim "but of course!"

If Guston came to his epiphany in order to maintain the AbEx ethos of emotional truth and grandiosity, the less dramatic shift in the work of another of the great masters signifies a parallel sacrifice of assured financial success for the risks of expressive freedom. Rembrandt's society portraiture was fine enough, if fundamentally consistent with then current aesthetic fashion. As he approached the age of 50, however, he shifted to the highly painterly and light infused work that secured his front rank status in art's history.

Closer to home, Roland Reiss built a strong following during the 1970s and 80s with his boxed dioramas, "Adult Fairy Tales," only to suddenly abandon them for what became a series of stylistic shifts that incorrectly struck some as gratuitous. He is currently immersed in a long series of large floral paintings which, now that Reiss has reached his mid-80s, show no flagging of ambition. He has clearly moved into a retrospective phase that permits him to survey both his personal aesthetic landscape and that of the historical context in which he inserts himself.

Which brings me back to Baseman's glorious failure. What sets it apart from the examples I've cited is that it is not the style that changes but the tone. The sheer juvenile whimsy (with just enough of an edge) of "Teacher's Pet" always revealed a grown-up mentality behind it. Subsequent gallery work was closer in spirit to "Rocky and Bullwinkle" creator Jay Ward than Guston or Reiss. His disarming spirit sported more of a smirk than a grin; and never sought to approach the philosophical depth of Jean Paul Satre, that's for sure.

But with the death of his parents came the recent project at Shulamit Gallery in Venice, California, "Mythical Journey," which draws on the elder Basemans' youthful experience as survivors of the Holocaust. His father, whose home town was exterminated by the Nazis, escaped and saw extensive action as a partisan in Poland, spending much of his time hiding out in local forests that provide the metaphorical setting for this installation. Baseman is unabashed in his appreciation for the contrast between his youth in Los Angeles and that of his parents. No doubt as a youth he was either oblivious to it, or dismissed it without grasping the reality. There is a sense here of making up for lost time. Narrative images, unlike the preceding examples, refuse to budge from the style and characters with which we associate him. Though he is clearly not satirizing or subverting the wartime experience at all, indeed this is a heartfelt homage to his parents' dreadful experience.

The emotional meaning that is so profound and personal to the artist, and gets us rooting for him, does not survive this devotion to style. Perhaps that's why parallel individual examples do not leap to mind, whereas convincing revolutions in style, a search for a new armature so to speak, come easily. A chic new outfit placed on an old mannikin that it doesn't quite fit runs the risk of becoming grotesque. Baseman needs to find a way to transform his work into real art; otherwise this will end up as a laudable but forgettable foray, a stern self-parody. OK then, Mr. Baseman, who do you really want to be?