To Fee or Not to Fee
Editors' Roundtable
by James Yood 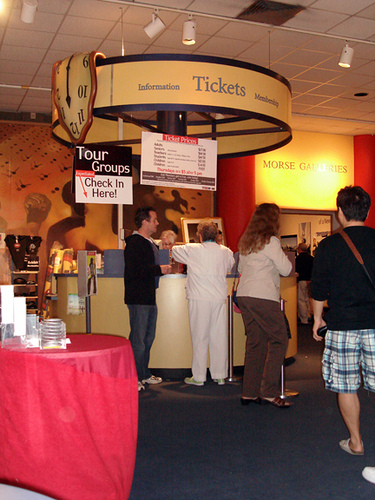 Perhaps I’ve saved you the time from googling all this data, and let’s be fair and add a few disclaimers. The above museums all offer reduced admission to populations such as children and seniors, and some shave a few dollars off for local residents and students, while others have a free day or evening. Some include special exhibitions in their regular admission fee, some do not, and almost all provide special rates to school groups and the like. Some of these museums are owned by their cities or are private institutions; others are not-for-profit or run by foundations. And a further disclaimer about the Met: it’s only now attempting to change its pay-what-you-like-but-you-must-pay-something policy, which came with a “recommended admission” of $25, to a mandatory $25 admission fee for adults. Many other museums, the Art Institute of Chicago, for example, have done the same. What was once a suggested admission has almost universally become a required fee. (The Met found that despite signage requesting the $25 recommended adult admission, their average entrance ticket sold for around $11.)

Now, what all this might mean is something else altogether — all of us understand the need of a museum to generate income. The Met draws around 6 million visitors a year; if all are adults and pay the full admission fee, the Met clears $150 million, not including the sale of Monet umbrellas from the gift shop. But the National Gallery in Washington draws around 4.2 million people a year, from which it clears $0. They both have a building as well as a collection to maintain, staff who require and deserve salaries, exhibitions that are often very costly to mount, and acquisitions they’d like to make.

Many of the museums cited at the beginning of this column were free when they opened a century or so ago. In those days art museums were considered akin to parks and public libraries: a civic right, always free at the point of entry. And like parks and libraries, art museums were funded by their communities in the democratic belief that cultural riches were not just the property of the wealthy, but should be made accessible to all. They still seem to think so in Cleveland, Fort Worth, St. Louis, etc. Not so much in Denver, Milwaukee, Philadelphia, etc.

Is it a good thing that a family of four might need as much as $100 just to walk into MOMA? Entry fees of this magnitude certainly keep the poor out — gee, you don’t think that’s part of these fees intention, do you? They are also a disincentive for the casual museum-goer, the man or woman who likes to run into their local art museum for 30 or 45 minutes just to look at a few things. It makes going to the museum not a spur of the moment act, but something that has to be planned for. You certainly are going to want to get your money’s worth, and what was once a leisurely stroll becomes more like a forced march for value. All in all, this seems a worrisome trend, and Cleveland has never looked so good.