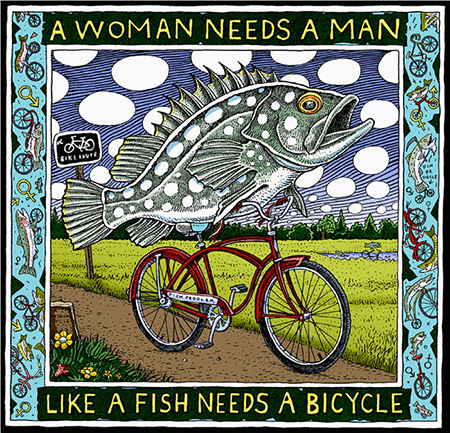 A phrase coined by Australian writer Irina Dunn (often misattributed to Gloria Steinem) frequently comes to mind when I sit down to write an art review: “A woman needs a man like a fish needs a bicycle.” Except that I paraphrase it to “An artist needs a writer like a fish needs a bicycle.” What I’m getting at is the absurdity — and on a certain level the futility — inherent in the arts writer’s mission to transliterate visual experience into words. After all, can words capture the experience of the Rothko Chapel or a James Turrell skyspace any more than words could capture the experience of listening to Bach’s Brandenburg Concertos? And yet we endeavor.

When I begin a review, especially a short one that will appear alongside many other capsule reviews, I work under the assumption that what I write will not necessarily be accompanied by a photograph. If it does wind up getting a photo, there’s no guarantee it’ll be in color. And in the case of reviewing 3D work, kinetic art, digital video, and the like, a single still image can’t do justice to, nor even approximate, the work’s gestalt. Another working assumption is that whoever reads the review will not have physically seen the exhibition, and that therefore my reconstitution of the work may be the reader’s only exposure to it. That puts a helluva lot of responsibility on the words I choose, especially when word counts are small. Try describing, contextualizing, and opining on a Paul McCarthy exhibition in 150 words.

So how do we do it? Different critics adopt different strategies. Personally, I try to paint a mental image not only of what the work looks like, but what it feels like to behold, by crafting sentences that to some extent reconstitute that emotional experience. If a work or its components projects equipoise or serenity, I phrase the sentence itself to reflect that, with clauses that will hopefully flow, soothe, and balm the “mind’s ear”: that voice we have inside our heads that reads “aloud” to us. If a work is more frenetic in its overall emotional tenor, I’ll use short, choppy sentences and fragments that jar, buffet, or poke. Because I have a musical background, I am apt to borrow from the applicable parlance. If a sculpture is made up of long, arching lines, I may call it “lyrical.” Or “staccato” if the contours are sharp and crisp.  “Counterpoint,” “fugal,” “étude” and “operatic” sometimes appear when I’m in this cross-pollinating mode. I enjoy other writers who do their own versions of this: people like Dave Hickey, Jerry Saltz, Peter Schjeldahl and Camille Paglia, who mix visual references with the diction of Hollywood, television, or rock’n’roll. It seems to me that a more interdisciplinary approach to arts writing helps guard against the very real danger of our discourse turning overly self-referential and solipsistic.

Versatility helps, too. Most rank-and-file arts writers work freelance for a variety of publications. In my case, when I’m writing for my hometown alternative weekly, Willamette Week (Portland, OR), I have the leeway to write in a voice as casual, irreverent, or even snarky as you’d expect an alt-weekly scribe to be. For art, ltd. and Visual Art Source, the tone is more serious but certainly not stolid or abstruse. For ARTnews, I know that once I’m done with a review, it will likely be edited in a way that conforms to the magazine’s “house voice.” Finally, when I write catalogue essays, I’m freer to write more academically and esoterically, with the assumption (whether true or not) that readers will have a greater knowledge base about the subject matter. Each of these voices belongs to me, but it’s me in wildly divergent gears. Shifting those gears can be whiplash-inducing. But each gear has its function, and ultimately I believe that despite the built-in limitations of writing about the visual, critics do have a symbiotic relationship with the artists they critique — one considerably more mutually informative than that between a fish and a bicycle. Without artists, after all, we arts writers wouldn’t have anything to write about; and in this era with so many artists competing for so little ink, pixels, clicks and (lest we forget) dollars, the adage that any press is good press is truer than ever.