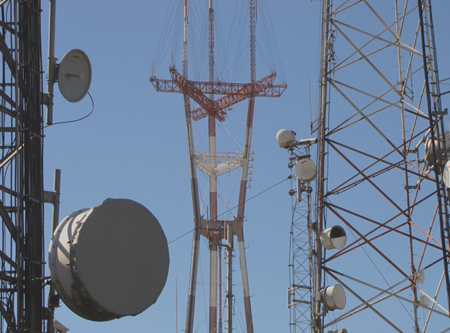 Broadcast towers atop San Francisco's scenic vantage point, Twin Peaks. Photo by DeWitt Cheng, who is always searching for a medium of communication that joins art with theory.

Recently one of my invisible Facebook Friends posted an excerpt from a thesis on art theory whose author, commendably, was soliciting comments. After the collapse in the 1970s and 1980s of the formalist line of thinking as epitomized by Clement Greenberg, a host of academic disciplines rushed in to fill the aesthetic-theory vacuum, many of whose names, disciplines and terminology will be familiar to art students of the past generation or two:  Adorno, Badiou, Barthes, Baudrillard, Benjamin, Bhabha, Bourriaud, Butler, Cixous, Clark, Deleuze, Derrida, Dickie, Eagleton, Eco, Foucault, Freud, Guattari, Hegel, Heidegger, Irigaray, Kant, Klein, Kuhn, Lyotard, Marx, Paglia, Pierce, Pollock (Griselda, not Jackson), Ranciere, Saussure, Stokes and Wittgenstein. Have I forgotten anyone?

Visual art has long relied on nonvisual elements like myth, religion, aesthetic theories and so on, so art viewers will always have to do some homework — or rely on art scribes to act as intercessors between the enigmatic art and the valorizing text. But, at the risk of seeming lazy or anti-intellectual (and the art world contains its fair share, even in this theoretical age, of proudly inarticulate visionaries), one has to ask, how much is enough? Do art viewers really have to become and stay well versed in philosophy, linguistics, semiotics, structuralism, post-structuralism, and all the rest? How do these fields impinge on and inform contemporary art, except in the most oblique, general fashion, invoking the Great Names to lend luster to art that often seems to have nothing much to say for itself. Such appeals to authority, often extremely light on art history (which has been replaced to a great extent by theory) constitute a kind of Theoretical Special Sauce that can be poured over any artwork no matter how bland or insipid. The message is in the MSG. Great personages have thought great thought, which inhere in these accumulations of art materials. It is no wonder that art audiences today generally do not take art very seriously, except as a form of socially approved entertainment and mating dance for the economic elect.

Of course, nobody has all the answers. Art has always served ruling-class ideologies - political, economic or religious - and often all three. Artists need to sell work, even to vulgar parvenus with bad politics. But the disconnect between what is inculcated in Theory-Age academic art programs - arcane and utopian - and the less sterling realities of the global art market is now so profound as to foster a kind of aesthetic schizophrenia. Should artists try to change the world, like the now scorned Modernists, who failed to make us better? Or should they rather become good businessmen, selling luxury goods to the moneyed bored, as Tolstoy characterized the art world of the mid-nineteenth century? The current overemphasis on theory deprives budding artists of a real engagement with art and artists (though not anti-art and anti-artists).

One step in the right direction, though, in my humble opinion, would be the teaching of art history in a deep and comprehensive way rather than art theory in all its manifold guises. Connect with things rather than abstractions. De Kooning, you may remember, compared the record of paintings going back 30,000 years to a rich soup that offers something for everyone. Who would give that up? Who, indeed, and why? Reading a recipe (for that is what, I believe, theory becomes) instead makes for empty calories and bad nutrition. That’s my Post-Theory theory, and I’m sticking to it.