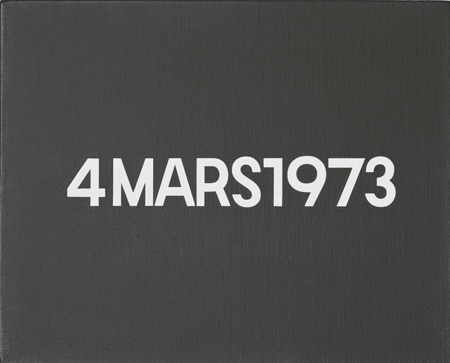 Just a few months to go and this, the most uninteresting, undistinguished, and inconsequential year in the visual arts (at least that I can remember) will thankfully be over.  I might have expected it — I’m convinced that nothing important ever happens in a year ending in 3 or 7. Just think about it: 1963, 1967, 1973, 1977, 1983, 1987, 1993, 1997, 2003, 2007, 2013. Except for JFK’s assassination in 1963, if you can remember something earthshaking or mind-blowing happening in any of those other years, you’re more attentive to such things than I am.  Even number years have Presidential and/or Congressional elections (yes, I’ll confess to being US-centric) or the Olympics; years ending in 1 or 9 have a beginning or end of the decade aura; and those ending in 5 have a nice mid-decade feel to them. But 3 and 7? They’re every decade’s orphans, filler that somehow has to be endured, interregnum time.

And so it has been in 2013. Contemporary art has never seemed more like a four hour layover between flights in the airport of an anonymous mid-size city, stuck between where it’s been and where it’s going, isolated in some bubble of somewhat soothing visual muzak, full of what appear to be creature comforts but curiously empty at its core. At Northwestern University there’s a smallish pink granite boulder by the side of Kresge Hall with a bronze plaque embedded into its surface that reads “ON THIS SITE IN 1897 NOTHING HAPPENED.” You could update that and slap it right over the art world in 2013 (though I think in this case it would look more accurate with lower case type rather than all capitals). It’s just seemed such a perfunctory year, everybody and every institution just going through the motions, almost as if we recognize that it’s our major responsibility now is just to keep the art machine going, warmed up, so when something important does happen, when some artist or group of artists truly surprises and redefines us, we’ll be ready to respond appropriately. Let it be soon.

I’m not everywhere, of course, and maybe things are different in your neck of the woods. But I did go to Venice for the Biennale as well as to several large art fairs, as well as my usual circuits around the Midwest. It’s not that I saw a lot of dreadful stuff — though, of course, I did — it was the attitude I sensed in many places, a kind of disengaged indifference, a ratcheting down of intensity, an absence of passion, risk, contentiousness, of any sense that art can somehow challenge anything or anybody in any fundamental way. It seemed enough just to hold a Venice Biennale, not to aim at holding a great one.

And, emblematic of this year of indecisive indolence, two institutions that are core participants in the cultural life of the US simply abjured their intellectual and aesthetic responsibilities, secure in the knowledge that they could get away with it, that their constituencies would just take it like the sheep they are. I made a trip to Minneapolis this summer, and looked forward to once again seeing the great modern art collection at the Walker Art Center. On my arrival, though, I was informed that the entire permanent collection would be closed for almost two months. Not with highlights of the collection moved to another gallery elsewhere in the building, not a few galleries closed at a time in rolling rotation, just closed. I heard some mumbling about fixing bricks on the exterior of the huge new building the Walker built in 2005, but the impression I received is that the Walker closed 95% of its facilities and 100% of why I visit it because they knew no one would object too loudly. No one would call its Director, Olga Viso, out and tell her that to darken the Walker in the middle of the summer and not make some or all of its masterpieces available to its audience was arrogance. I’ll never go back.

So I returned home to Chicago, only to find that the Art Institute of Chicago, right after Labor Day, closed an entire floor of its new Modern Wing, the one dedicated to European Art from 1900-1950, and it will remain that way until Spring 2014. Again, its great works by Picasso, Matisse, Brancusi, Mondrian, Giacometti, Magritte, Kandinsky, Dali, Miro, etc., will not be moved to another site in the museum, they’re simply removed from public view for the next eight or nine months — unless you live in Fort Worth, as more than 100 of these works will be lent to the Kimball Museum (gee, you don’t think any money is changing hands on this one, do you?). No specific reason given here either, just some vagueness about working on the galleries (the Modern Wing opened in 2009, certainly it must be in shambles by now, museums have a shelf life of 4-5 years, yes?).

But I’ve decided not to get angry; this is, after all, a year ending in 3. I’m just going to hide in my basement for the next three months. And do me a favor, don’t come knocking in 2017 either.